Shraddha Kapoor shared a snap of Varun's 'Mr Lele' first look and said that he looked he he was wearing her dad's stolen underwear.

Shraddha Kapoor took to social media to express her pleasure over Varun Dhawan's new film's announcement--Mr Lele. Varun's first look from the forthcoming film was unveiled on Monday and he was seen wearing just underwear in the teaser poster. Shraddha, Varun's Street Dancer 3D co-actor, shared a snap of Varun's Mr Lele poster and said that Varun looked like he was wearing her dad's 'kaccha' (underwear). 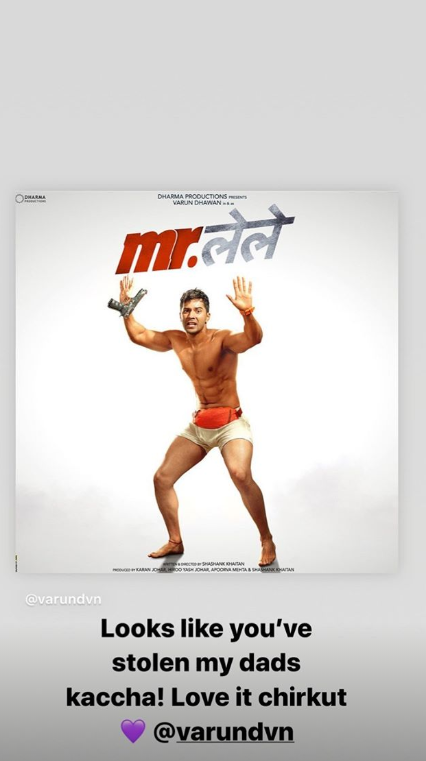 Director-actor duo Shashank Khaitan and Varun Dhawan will be returning to the big screen with another entertainer Mr Lele on January 1, 2021.

Dharma Productions, the banner behind the Dulhania franchise, is producing Mr Lele as well. There were reports that the movie will feature Bhumi Pednekar and Janhvi Kapoor, but the makers have not made any formal announcement yet.

Varun will next be seen in Street Dancer 3D, which is scheduled to be released on January 24. He is also working on Sriram Raghavan's Arun Khetarpal biopic.