Shraddha Kapoor and Riteish Deshmukh took to social media to congratulate director Mohit Suri as he announced Ek Villain 2 with its new cast and release date.

On Thursday, Mohit Suri unveiled the cast and the poster of his upcoming movie Ek Villain Returns. Although the poster did not show any actors, Mohit tagged the star cast in his Instagram post that included Tara Sutaria, Disha Patani, John Abraham, and Arjun Kapoor.

Captioning the post, Mohit wrote, “Hero ki kahaani sab jaante hai.. par villain ki? (everybody knows the story of a hero, but what about the villain?)” The director also announced the release date of the movie i.e. February 11, 2022. The post has garnered over 14k likes on Instagram since it was posted on Thursday.

The upcoming movie is a sequel to the 2014 movie Ek Villain that was also directed by Mohit. The movie starred Sidharth Malhotra, Shraddha Kapoor, and Ritesh Deshmukh in lead roles. Congratulating the filmmaker, Ritesh and Shraddha took to their social media handles and shared their excitement. 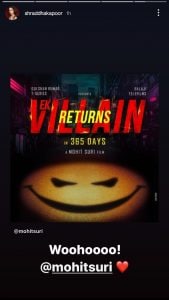 It was earlier speculated that Aditya Roy Kapur will be playing a crucial role in the movie, however, with Mohit’s announcement, it has been confirmed that Arjunwill be starring in the movie instead. According to a 2020 report by Mumbai Mirror, the Ek Villain franchise will be turned into a universe of villains, just like Hollywood has its universe of superhero movies. The report also mentioned that the director will be exploring the dark side of human psychological behavior through this franchise.