Simran is undoubtedly entertaining, but it is more of a presentation of the acting prowess of the incredible genre-crossing actor Kangana Ranaut.

How a film opens speaks volumes of not just about the style it would follow, but also whether it would piss or make the viewers sit upright in their seats with interest. Director Hansal Mehta’s opening shots in Simran features Kangana Ranaut as Praful Patel - a housekeeper in the hotel who makes up beds, changes linen, scrubs sinks and dusts furnitures and fittings. But when she is with her close pals, she can let her hair down, let herself go, discuss her plan to buy an apartment and just not be afraid of showing her goofy and funny side. And it is precisely in the opening scene that Hansal establishes Praful's disinterest towards a committed relationship, which sets the tone for Simran in a cinematic way. Soon, we are told that the ‘pakki Gujarati’ 30-year-old divorcee Praful, who lives in Atlanta (US), shares a rather obnoxious relationship with her father who constantly condemns her for failed marriage, and her possible inclination towards getting ‘boyfriends’ to her yet-to-purchase apartment. It is the inability to get accepted by her controlling, imperious and hypercritical father that leads to her egregious behavior and spur of the moments decisions including an unplanned bachelorette trip to Las Vegas. Sequences that feature Praful travelling solo in Las Vegas - ultimate in self-indulgence - are suggestive of what you saw in Kangana’s much-appreciated film Queen. She takes in new locations unfiltered by any predispositions, preferences and tastes. Her mistakes are her own, and victories all the more thrilling. Amidst a rather hectic work life and even more complex life at home, this break helps her get time to recharge her battery, reflect on life and just enjoy her company. But just when we think it would be a gift that she will eventually relish, her addiction to gambling makes her loose her savings, and puts her in a predicament wherein she is clueless about the ways to pay off the debt.

What’s really unacceptable about the film is director Mehta’s execution of bank robberies which isn’t just silly, but bizarre too. It clearly mars the film's impact which had so far cashed in on its realistic feel.

It is pretty annoying that the film falls victim to such a glaringly obvious and downright absurd error. Don’t thieves craft ways to get their hands on bank reserves? Don’t they don extreme disguises and craft elaborate strategies to execute robberies? But Praful isn’t a brazen criminal which is why she doesn’t invest remarkable thieving efforts, but still makes the idea of robbing banks look so easy. For the director, she might be a creative criminal. But for viewers, her idea to rob banks by handing out a note written in lipstick isn’t convincing enough. Agreed, the film is inspired by the real life story of US-based Sandeep Kaur, a 24-year-old Sikh nurse popularly referred to as the ‘Bombshell Bandit’, a canny treatment of her planning shouldn’t have been disregarded.

While the film’s first half is engaging, courtesy Praful’s zeal and interest to take risks, the second half pales in comparison as the promising plot falls into clichéd trappings. 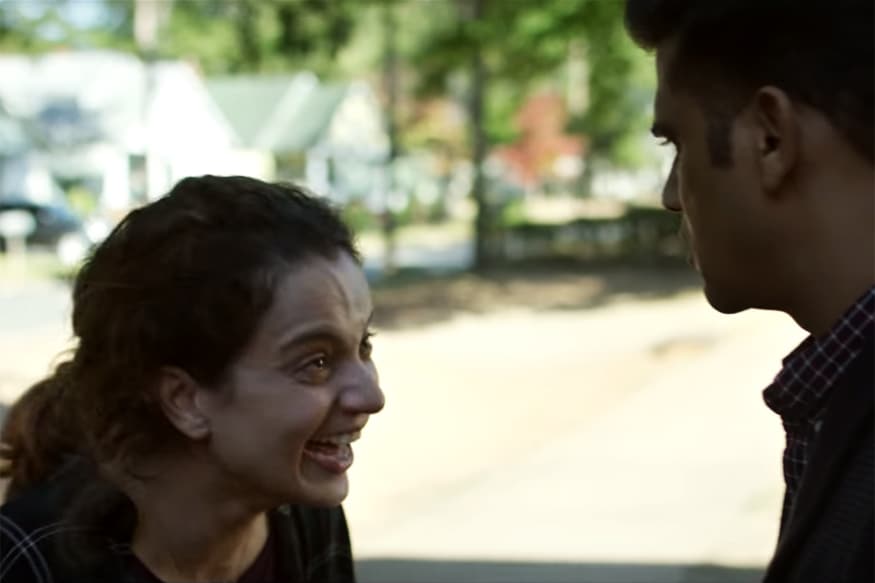 Another flaw in Simran which is hard to ignore is an almost forced love angle to Parful’s life. Since Sohum Shah doesn’t have anything crucial to offer to the story, except a few songs, his character could have been avoided much like the bunch of foreigners used in the film. Praful’s parents Hiten Kumar and Kishori Shahane do justice to their role of offering her criticism, encouragement and support.

Kangana revels in her role as Praful, and successfully delivers a first rate performance. Even though there are a few slip-ups, she manages to conceal them with her almost immaculate act. As a terrific actor that she is, Kangana can easily make you believe that she is actually experiencing whatever her character undergoes. I'm talking about the physical part. It looks real when she is being hit against the door by Mike (her senior) on demanding her lost money, or when she is attacked on her inability to pay off the debt. And that holds true for the psychological part too. She is actually impacted by her addiction to gambling. Since Kangana does her job as an actor convincingly well, she doesn’t have to fake it. All those who feel actor’s ability to surprise the viewers is the most crucial requirement for a film’s success won’t find Simran disappointing. Sequences featuring her rapid changes in mood which include uncontrollable laughter, irritability and unexpected angry outbursts make it difficult for anyone to predict Kangana’s reactions. As a true actor, she not only knows the extensiveness of human possibility, but also the profundity of her skills. She isn’t guarded while exhibiting her vulnerability. From unpleasant to nasty and petty thoughts – she puts all aspects on display to show she is just like anyone of us. Her rawness, smartness and sense of humour makes Simran surprising and fresh.

Simran is undoubtedly entertaining, but it is more of a presentation of the acting prowess of the incredible genre-crossing actor Kangana Ranaut.