Home » News » Movies » Sonam Kapoor Says She is Going to Be a 'Yes Mom' as She Reacts to Anushka Sharma's Question, See Post
1-MIN READ

Sonam Kapoor Says She is Going to Be a 'Yes Mom' as She Reacts to Anushka Sharma's Question, See Post

Anushka Sharma shared a glimpse of her upcoming project where she can be seen dancing to a song that says 'Yes ka time aa gaya.'

Mom-to-be Sonam Kapoor revealed on Instagram what kind of mom she is going to be, and it is ‘Yes Mom.’ Confused? Well, Anushka Sharma shared a video on her Instagram handle asking what kind of mom someone wants to be. The Pari actress shared a video from one of her upcoming projects where she can be seen dancing to a song that says ‘Yes ka time aa gaya.’ Sharing that, she wrote, “I’m curious to know, how many times in a day do parents end up saying NO? From screen time to meal options, to chemicals in toys…the list is endless. Are you a YES parent or a NO parent?’

Sonam shared this on her Instagram Story section and Sharing this story, Sonam Kapoor wrote, ‘I think I am going to be a YES mom’. 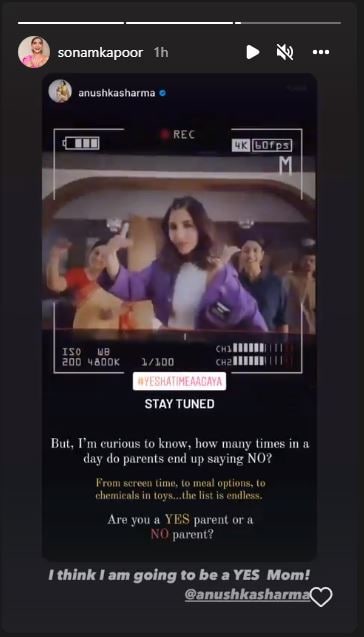 Sonam Kapoor and her husband Anand Ahuja will be welcoming their first child this year. In March, they announced this on social media through a photoshoot with an adorable note that the actress penned for her unborn child. Sharing the photos, she wrote, “Four hands. To raise you the very best we can. Two hearts. That will beat in unison with yours, every step of the way. One family. Who will shower you with love and support. We can’t wait to welcome you. ❤️❤️❤️ #everydayphenomenal #comingthisfall2022.”

Meanwhile, on the work front, Anushka is prepping for her upcoming flick Chakda Xpress. The movie is inspired by the life and times of former Indian cricket captain Jhulan Goswami. The movie traces the glorious journey of one of the fastest female pacers in the history of world cricket as she moves up the ladder despite the countless hindrances posed by misogynistic politics to fulfil her only dream: to play cricket.