Enola Holmes, Crackdown and Utopia are some of the new titles on OTT that you should check out this week.

Releasing in the middle of the week, Millie Bobby Brown's film Enola Holmes is making the right noise for its fast paced storytelling and political overtones. On the surface, it seems like the adventures of a teenage girl, sister of a very famous detective, but has more depth to it than is evident. With a bunch of famous faces as its primary cast members, the film makes for a delightful watch.

Director Apoorva Lakhia, known for some big screen crime dramas, is bringing his expertise to the OTT world with his debut series Crackdown. The espionage thriller is a no-nonsense drama that keeps its focus on the main narrative and offers up twists in plots when you are least expecting them. Perfect for a weekend binge watch session.

Here are more titles that you could add to your watchlist this week.

Stranger Things star Millie Bobby Brown features as the smart sister of the already famous Sherlock Holmes who displays some sleuthing skills of her own. The film is based on the Enola Holmes Mysteries by Nancy Springer, a series of young adult fiction books. Besides the very popular protagonist, the film has a bunch of other famous actors – Henry Cavill playing Sherlock Holmes, Sam Claflin as Mycroft and Helena Bonham Carter as their mother. The fast paced narrative focuses entirely on Enola, who, while searching for her missing mother, uses her sleuthing skills to help a runaway lord whose vote could change the fate of the Reform Bill. Set in 1884, the film refers to the suffragette movement and has been garnering praise for its strong theme of women supporting each other as their fight for gender equality. Millie Bobby Brown and her sister Paige Brown have also produced the movie.

The cult conspiracy drama has been given a flashy US revamp, starring John Cusack as a cult-of-personality CEO. It is John’s first television series, making his digital debut with the much anticipated thriller. Adapted from the 2013 British series of the same name, the 8-episode series has Cusack as the protagonist trying to save the world from impending doom. Re-imagined by Gone Girl and Sharp Object’s creator Gillian Flynn, the plot of revolves around a group of young adults who meet online, get a hold of a cult underground graphic novel, and soon realize that everything in the book Utopia is real including man-made diseases and bio-warfare.

above all, dr. christie does his work. #UtopiaTV

Shootout at Lokhandwala director Apoorva Lakhia has made his digital debut with this espionage thriller series about a Directorate of Operations (DO), a covert wing of the investigation agency RAW, which doesn’t mid bending the rules and is ready to accept collateral damage if that gets the job done. This elite squad carries out anti-terrorist operations in Delhi, Kathmandu and Mumbai. Cast members include Saqib Saleem, Shriya Pilgaonkar, Iqbal Khan, Waluscha D’Souza, Rajesh Tailang and Ankur Bhatia. The show boasts of totally unpredictable plot twists alongwith convincing performances delivered by the actors. This could very well be worth checking out.

If you are looking for a light-hearted and family-friendly series, check out this one. Pariwar has been directed by Sagar Ballary, who made Bheja Fry in 2007, on the theme of uniting a disgruntled family using the ruse of a patriarch about to kick the bucket. Members of the Pariwar squabble over property, but are united when they spot a common enemy – a theatre actor who has been promised a part of their land by their father. This family drama has a bunch of talented actors – Gajraj Rao, Ranvir Shorey, Abhishek Banerjee and Vijay Raaz, among others. The show is based in Prayagraj, aka Allahabad, and seeped in local flavour, which adds to the humour.

Traffic, an American crime drama explores the illegal drug trade from several perspectives: users, enforcers, politicians, and traffickers. Their stories are edited together throughout the film, although some of the characters do not meet each other. The film stars an international ensemble cast, including Don Cheadle, Benicio Del Toro, Michael Douglas, Erika Christensen, Luis Guzmán, Dennis Quaid, Catherine Zeta-Jones, Jacob Vargas, Tomas Milian, Topher Grace, James Brolin, Steven Bauer, and Benjamin Bratt. It features both English and Spanish-language dialogue' 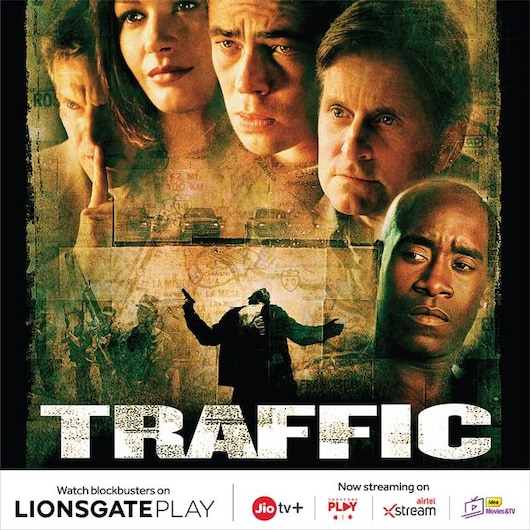 We will be back with more suggestions from new content on streaming services next week.