Streaming Now: Sacred Games Gets Bigger in Season 2, It's Game Over for Taapsee Fans

Besides Sacred Games 2, more thriller content like Mindhunter Season 2, Game Over and Posham Pa will keep you hooked.

Season 2 of the biggest Indian show on Netflix, Sacred Games, has dropped this week. For those of us unfortunate souls who couldn't do the midnight binge on Independence Day, it is time to seize the weekend! Trying to stay away from spoiler-filled social media so far has surely been a task.

Game Over was a small movie and chances are that you missed it when it released in theatres in June this year. Fret not, because this psychological thriller is dropping on Netflix this week. It received positive response from critics and is surely worth a dekko.

Here are the other watch-worthy titles you should check out this week. 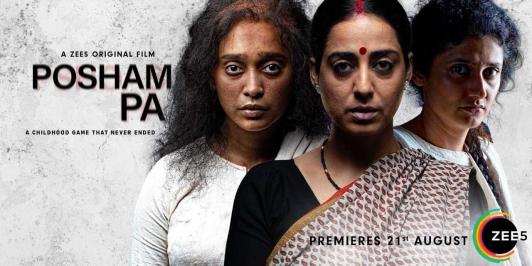 Posham Pa is a psychological thriller starring actresses Mahie Gill, Sayani Gupta and Ragini Khanna. It is directed by national award-winning filmmaker Suman Mukhopadhyay, written by Nimisha Misra. Posham Pa has been inspired by true events, researched by senior journalist Praful Shah. The story revolves around a psychologically disturbed mother who coerced her daughters into a life of crime. The daughters are now facing death penalty for their violent crimes and describing their life story to two documentarians essayed by Imaad Shah and Shivani Raghuvanshi. Like the first season, Sacred Games 2 has a total of eight episodes. Season 2 picks up with Sartaj Singh (Saif Ali Khan) right where we left off, as the Mumbai cop tries to thwart a potential nuclear attack that he uncovered at the end of last season, after being put on the trail by the gangster Ganesh Gaitonde (Nawazuddin Siddiqui). With a new co-director in Neeraj Ghaywan, Anurag Kashyap has returned to the fore with more bloodthirsty gangsters, more alert cops and a whole bunch of new players with deep entrenched fangs in the Indian government. With the release of Sacred Games Season 2, Netflix made sure that we were hooked and now with Mindhunter Season 2, they are feeding our desire of intense thrillers even further. David Fincher's serial killer drama has premiered on Netflix with nine episodes this year. The first season premiered in October 2017. The second season starts soon after the events of the first. Helmed by the director of Zodiac and Seven, Mindhunter marks one of the odder under-the-radar offerings for the streaming service. Shot simultaneously in both Tamil and Telugu languages, the film stars Taapsee Pannu as a single young woman who is also a talented game designer. She's a wheelchair-bound person trying to defend her home from a mysterious intruder. The film received positive reviews from the critics, garnering praise for Taapsee's performance and Ashwin Saravanan's direction.