Streaming Now: Watch Out For The Priyanka Chopra-produced Firebrand on Netflix

With a fierce female character in the lead, Firebrand is at the forefront of this week's new titles streaming on platforms like Netflix and Hotstar.

Two legal dramas, both with strong female characters in the centre, are the highlights of the fresh content streaming on OTT platforms this week. One is an Indian production from actress Priyanka Chopra’s production house, while the other is a new American series premiering this week. Oscar-winning animated film The Red Turtle will also be available on Netflix, as will the cult hit sitcom It’s Always Sunny In Philadelphia.

Firebrand is produced by Priyanka Chopra and Dr Madhu Chopra’s Purple Pebble Pictures. True to its name, the Marathi drama traces the life of a feisty family lawyer (Usha Jadhav) who fights the good fight for women in court. Jadhav’s character herself is seen dealing with post-traumatic stress disorder after surviving a sexual assault. Directed by Aruna Raje, the film “revolves around trials and tribulations of contemporary modern-day relationships”. The cast also includes Sachin Khedekar, Rajeshwari Sachdev and Girish Kulkarni. Another legal drama with a fierce and fearless female lawyer in the centre is Proven Innocent, a new American TV series created by David Elliot. Rachelle Lefevre stars as Madeline Scott, leading a team that reopens investigations, putting their own lives in danger to exonerate the innocent that were 'proven' guilty. The show also stars Russell Hornsby, Nikki M. James, Vincent Kartheiser, Riley Smith, Kelsey Grammer and Clare O'Connor. The 2017 Oscar winner in the Best Animated Feature category is coming to Netflix this week. The fantasy drama film is co-written and directed by Dutch animator Michaël Dudok de Wit and produced by Toshio Suzuki from Japan. It tells the story of a man who becomes shipwrecked on a deserted island and meets a giant red female turtle. Interestingly, the film has no dialogue.

It's Always Sunny in Philadelphia (Hotstar)

This American sitcom, which has developed a cult following, follows a group of five fictional misfit friends whose behaviour could be considered unethical by today's standards. Together they run the Irish bar Paddy's Pub in South Philadelphia. They have no sense of shame when attempting to get what they want and often engage in activities that others would find humiliating, disgusting, or shocking. The critically acclaimed show is often compared in style to Seinfeld - particularly due to the self-centered nature of its main characters. 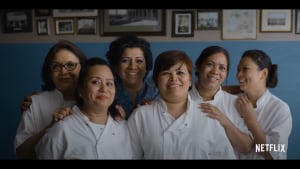 In this Emmy-nominated show, each chef's discipline and culinary talent is explored while he or she prepares an awe-inspiring creation. The new season has some renowned chefs from around the world sharing their deeply personal stories, inspirations, and unique styles. One of the stories is of an Indian-origin woman, who wants to make her mother proud as a daughter who was not welcome at birth.