Actress Anushka Sharma, who is expecting her first child with husband Virat Kohli, celebrated Royal Challengers Bangalore’s win over Sunrisers Hyderabad in the ongoing IPL 2020 by putting out a story on Instagram.

In the picture uploaded in the story, RCB captain Virat Kohli can be seen celebrating a wicket with Yuzvendra Chahal and Aaron Finch. Posting the story, she wrote, “Winning start.” 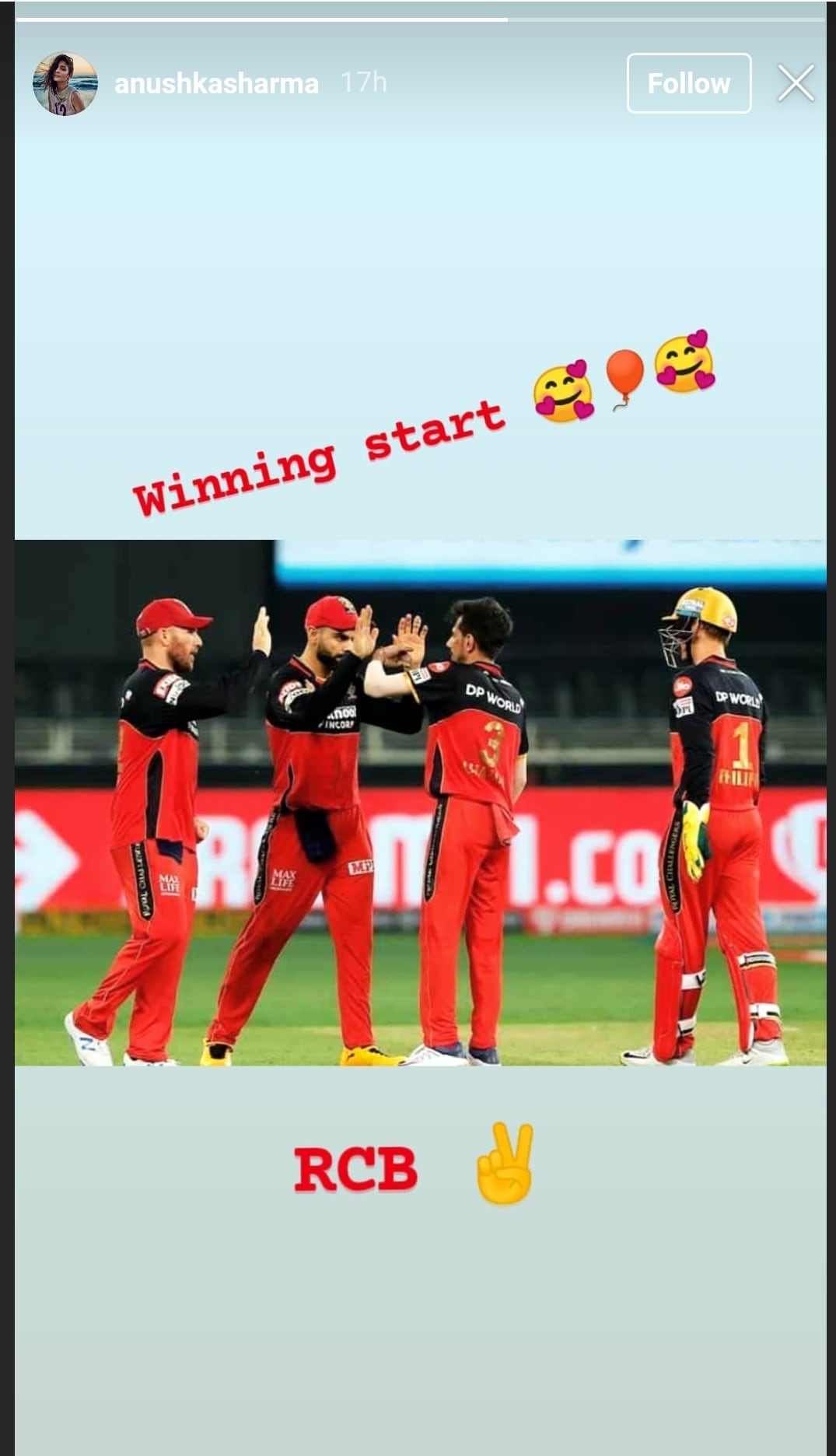 Royal Challengers Bangalore on Monday defeated Sunrisers Hyderabad by 10 runs. The Kohli-led team put up 163 runs in 20 overs on the scoreboard. RCB openers Aaron Finch and Devdutt Padikkal gave a good start to their side with the Australian batsman scoring 29 off 27 balls and the young southpaw making 56 off 42 balls. Then, AB de Villiars helped RCB reach the total of 160 plus.

Off to a great start. Well done lads. We march on 💪💪 #PlayBold @royalchallengersbangalore

As the score was not too challenging, so the RCB bowlers had a big responsibility on their shoulders. They lived up to the expectation and turned the game in RCB’s favour. Chahal took three wickets, while Shivam Dube and Navdeep Saini picked two wickets each.

Anushka and Kohli made the announcement about the pregnancy last month. They took to Instagram to inform their followers and friends that they are expecting a baby. The couple posted a picture in which they can be seen smiling. The caption of the picture read, “And then, we were three! Arriving Jan 2021.”

The actress on the occasion of World Gratitude Day on Monday shared a picture of herself wherein she can be seen standing in a swimming pool in a black swimming costume. Her baby bump is also visible in the photo. In the caption, she wrote some positive quotes.

“Acknowledging the good that you already have in your life is the foundation for all abundance” – Eckhart Tolle Gratitude to all those who showed me kindness and made me believe in goodness in this world , opening my heart enough to practice the same with the hope to pay it forward 💜 Because … ” After all , we are all just walking each other home ” – Ram Dass #worldgratitudeday 💫

Anushka seems to be enjoying this phase of pregnancy as she had earlier too uploaded a picture of herself standing on a beach with a hand on baby bump and a smile on the face.

Nothing is more real & humbling than experiencing creation of life in you . When this is not in your control then really what is ?

Sharing the photo, she wrote, “Nothing is more real & humbling than experiencing creation of life in you.”