A throwback picture of Ranbir and Riddhima Kapoor as children posing with mom Neetu is doing the rounds on social media. Take a look.

A throwback picture of actress Neetu Kapoor with children Riddhima and Ranbir has surfaced on the internet. In the snap, baby Ranbir can be seen leaning on his mother while Riddhima is standing on the side.

Meanwhile, Riddhima had shared a photo in her Instagram stories in which she can be seen wearing the same shoes as her mom. Captioning the twinning photo she said, “@neetu54 shoe twinning (sic)." 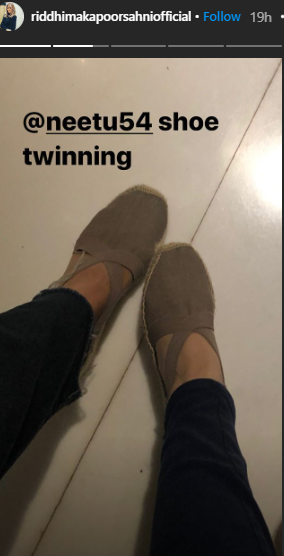 In the subsequent story, Riddhima has shared a selfie with her brother and mother. In the happy snap, Riddhima can be seen wearing a black and white outfit, while Ranbir is sporting a denim shirt. Their mother, Neetu is dressed in a red top which has paired with a golden colour neck piece. After Riddhima's father, legendary actor Rishi Kapoor’s death, she has been staying in Mumbai with her mother. Riddhima has also got a pet dog for her which they have named as Doodle Kapoor. Recently, Neetu shared an adorable image on the photo-sharing platform. In the picture, the veteran actress can be seen cuddling her cute pooch.

View this post on Instagram
Can’t thank @riddhimakapoorsahniofficial enough for this cute button “Doodle “ also @vardaan_gupta__ for sending A post shared by neetu Kapoor. Fightingfyt (@neetu54) on Jun 17, 2020 at 9:54am PDT