Tiger Shroff Asks Netizens 'Could I Go Higher' as He Jumps Over a Tall Mat; See Video

Tiger Shroff took to his Instagram stories section to share a clip of him attempting a high jump and asked the netizens whether he can nail even a higher jump.

When it comes to fitness, Tiger Shroff’s social media handles are filled with posts that would motivate anyone to work out. One of the most active and fittest actors in tinsel town, Tiger has set the bar high with his workout routine. Recently, the actor took to his Instagram stories section to share a clip of him attempting a high jump, and along with the video, he asked netizens whether he can nail even a higher jump.

In the video, he can be seen in a yellow tank top and trousers, attempting a jump over a tall gymnastic mat. As the caption, he wrote, “Not the tallest guy but I can jump over myself on a good day". He added Instagram’s question sticker feature, and asked, “could I go higher?" 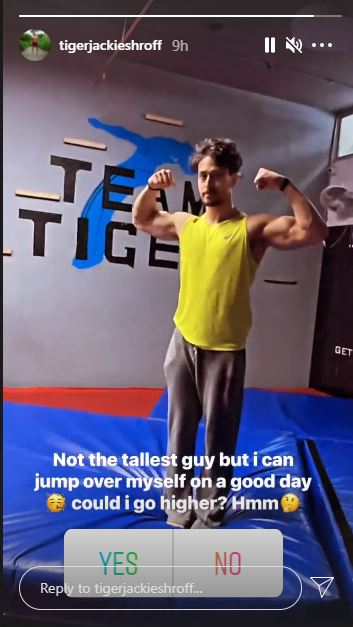 The Heropanti actor recently shared another video in which he was seen lifting 140-kilo weights on barbells and performing squats. He said he was inspired by Olympic silver medalist Mirabai Chanu. He wrote in the caption, “40 kgs and counting…So so inspired to get stronger and go beyond my limits thanks to #mirabaichanu what a performance! Go team India (sic)."

Meanwhile, on the work front, Tiger is currently shooting for the sequel of his debut film Heropanti. Heropanti 2 is directed by Ahmed Khan and has Tara Sutaria starring opposite Tiger Shroff.