Tovino Thomas is one of the most famous actors in the Malayalam film industry. His popularity has skyrocketed recently with the release of ‘Minnal Murali’.

The rising star of Malayalam cinema, Tovino Thomas, turned 33 on Friday. The actor was recently seen in Minnal Murali, a one-of-a-kind superhero film directed by Basil Joseph. The movie was released last month on streaming platform Netflix and instantly became a hit among his fans. Tovino has time and again showcased his talent in acting with movies like Forensic, Kurup, Kala, and Kalki. Considering his ever-increasing fan base across the country, the actor received several wishes from his fellow actors and fans on social media today. Unni Mukandan, who also works in the Malayalam cinema, shared his birthday wish for Tovino via Instagram story. The actor, who starred in movies like Bhramam, shared Tovino’s poster from Minnal Murali and wrote, ‘Happy birthday Minnal, Tovino Thomas.’ 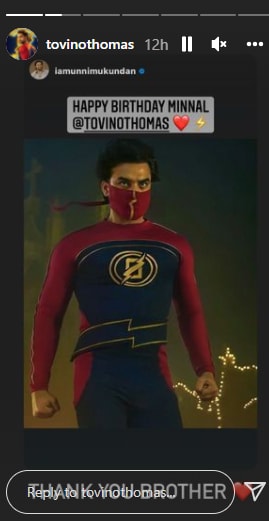 Actor and producer Kunchacko Boban also wished Tovino via his Instagram story. Boban shared a picture of Tovino where he can be seen wearing a dark green sweatshirt while playing a guitar. Along with the picture, Boban wrote, ‘Happy birthday Minnal Bwoy.’

Fans have also been expressing their love for the actor on social media. One of the fans of the actor wrote on Twitter, ‘Happy birthday our dearest Minnal Murali aka Tovino Thomas wishing you all the success ahead.’

Another fan tweeted, ‘Here is wishing a fabulous birthday to our own superhero Tovino Thomas.’

On Thursday, Tovino wrapped the shooting for his next film Vaashi. The actor shared pictures with the cast and crew of the film on Twitter and Instagram. Sharing the images on Twitter, Tovino wrote, ‘And it’s a wrap at Vaashi! Super happy to have joined hands with buddy Vishnu Raghav in his first venture as a director. I wish the world for you brother! And thanks to the amazing co-star Keerthy Suresh and the cast and crew for making Vaashi most memorable.’

And it’s a wrap at Vaashi !
Super happy to have joined hands with buddy #vishnuraghav in his first venture as director. I wish the world for you brother ! And thanks to the amazing Co-star @KeerthyOfficial and the cast and crew for making #Vaashi most memorable 😊 pic.twitter.com/UqBD34x4vF

Tovino mentioned on Instagram that Vaashi portrays something that is ‘super relevant’ and he expects it to reach out to the audience soon.