Home » News » Movies » Urfi Javed Lashes Out At Hindustani Bhau, Says 'I Am Concerned About My Safety'
2-MIN READ

Urfi Javed Lashes Out At Hindustani Bhau, Says 'I Am Concerned About My Safety'

Urfi Javed hits back at Hindustani Bhau for attacking her over her outfits. (Photos: Instagram)

Uorfi Javed also talked about how social media trolling or threats have impacted her mental health. Read on to know what she has to say.

Uorfi Javed is known for her love for her bizarre or bold outfits. Each time the actress is spotted in public or drops pictures on social media; her outfit grabs everyone’s attention. On Sunday, the Bigg Boss OTT fame took to her Instagram stories and penned down a long note, lashing out at Hindustani Bhau. She reminded him about him being imprisoned in the past and claimed how the YouTuber wanted to connect with her in the past.

“Ohhh!Or aap gaali dete ho wo to India ka Riyaz hai, apka gaaliyo ne kitne logo ko sudhara hai.. Now that you’ve openly threatened me, you know I can put you behind the bars but wait haven’t you been there like a million times already? Ye toh kitna achha msg hai youth k liye jail jana, apne se aadhi umar ki ladki ko openly threaten karna. Also remember you told my photographer and Mohsin that you wanna talk to me a few months back that you wanna help me in Obed Afridi’s case you wanted publicity and I told you straight away no. I don’t want your help! Kapde toh ya hu mere same the! Also one thing f**k you,” Uorfi wrote. 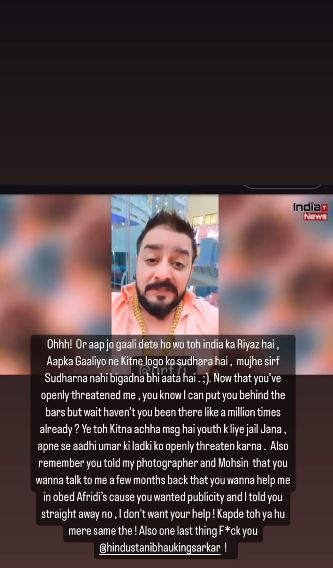 In another Instagram story, Uorfi talked about how social media trolling or threats have impacted her mental health. The actress mentioned that even though she is not scared but is concerned about her safety.

“These are literally the same people who wanted me to come meet them few weeks back. Be friends with them just because I denied their friendship, their help cause I knew their intentions now they are coming at me. Guys trust me they ghan*a care what I wear, they only want publicity. Honestly everyone on the internet threatening to hit me, kill me fu***d me up mentally (no lie.) Imagine being in my posting everyday someone uploading a video against you, threatening to beat you up cause of what you put on your body. I have never said anything ill about anyone, harmed anyone," she added. This comes after Hindustani Bhau threatened Uorfi to stop wearing bold outfits, claiming it is against the Indian culture. Recently, Uorfi also hit back Anupamaa fame Sudhanshu Pandey after the latter reacted to one of her videos and called it ‘ghastly’. “The irony. Anupamaa is a show about woman empowerment where a woman is shattering all the ‘normals’ set by the society for women. Why don’t you watch your own show Sudhanshu? Might learn something,” she wrote on her Instagram stories.