Urfi Javed gets trolled for her new outfit made of bicycle chains.

Urfi Javed took to Instagram to post a video of her new outfit made of bicycle chains. The TV actress was trolled for her sartorial choice by netizens.

You can love her or hate her but you simply cannot ignore her. We are talking about none other than Urfi Javed. Each time the Bigg Boss OTT fame is spotted in public, she leaves everyone completely stunned with her choice of outfits. While Uorfi’s fans often hail her for being bold and creative, there are some who often troll her for her ‘weird and bizarre’ fashion choices. Once again, Urfi Javed is getting trolled, credit to her latest outfit.

In a video posted on her official Instagram handle, Urfi is seen getting rather creative as she wrapped around a bicycle chain around her body as plunging top and sexy mini skirt. Th video starts with Urfi riding a bicycle on a road, and soon she discovers that he cycle’s chain is broken. Next, we see the diva wrapped in chains and oozing oomph in the sexy attire.

In the caption to the video, Urfi revealed one of her friends gave the idea to make outfit from cycle chains. She wrote, “Cycle ki chain !! Even I could’ve never thought dress from this ! This wasn’t my idea tho , a friend just jokingly said isne toh cycle ki chain ki dress bana di - I was wait I never did that but may be I can "

However, soon after the video was shared on social media, several social media users reacted to it. A large number of people questioned Uorfi’s choice of outfit and trolled the actress. " had hai bhai ," one of the comments read. Another social media user wrote, “Kis bacche ki cycle ki chain hai “. Another person called her a “sabka chain chura lia".

Previously, Urfi Javed took to her Instagram stories and shared a picture revealing how she got badly bruised because of her recent sartorial choice.

“Maine ek aisi cheez ki dress banayi ke mujhe hi chot lag gayi ache se (I made a new dress from something that has left me wounded)," she wrote in the caption. Check out Urfi Javed’s story here: 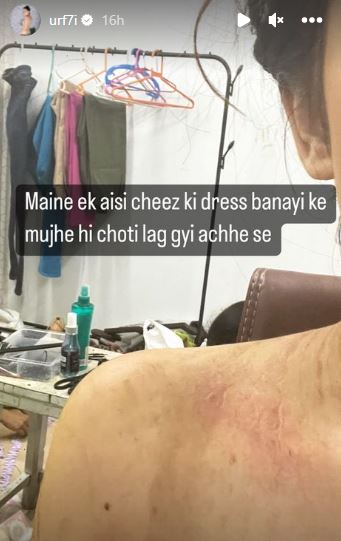