Vicky Kaushal's black-and-white photos on Instagram have attracted a volley of comments from women going ga-ga over his looks.

Vicky Kaushal is no stranger to female fans going ga-ga over his boy-next-door looks. One of the most popular new stars in Bollywood, the actor is bombarded with fans posting thirsty comments each time he posts a picture on social media. The Manmarziyaan star has worked his charm once again, posting shirtless photos this time, and the kinds of comments he's attracted is enough to make any man blush.

In the black-and-white photos on Instagram, the 31-year-old reveals very little of his torso. Vicky shared the photos with the cheeky caption - "#ootd" - despite there being no outfit.

Comedian Tanmay Bhat commented with lines from Kareena Kapoor's famous song, Raat Ka Nasha, from Asoka. But that was just the tip of the iceberg. Take a look at some of the comments female fans posted:

* Stop making people crave for you

* Shouldn't see these things in office

* You should be banned, this is way more than we can handle

* And the next thing I know is I'm pregnant 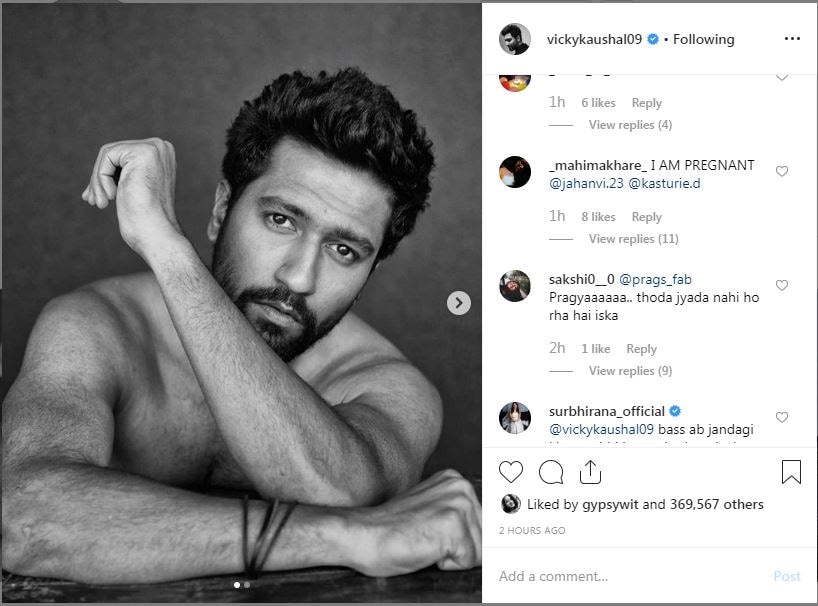 These photos come a day after the actor's latest magazine cover was unveiled on social media, in which he has posed with luxury cars and high-end bikes. On the cover of Exhibit magazine, he poses with a Mercedes Benz car, wearing a geometric patterned blazer alongwith some cool blue pants.

Read: Vicky Kaushal Throws Some Intense Looks as He Poses with Cool Cars and Bikes in Latest Mag Cover