The trailer, which has already earned over 7 lakh hits, opens with the preface, “In a land ruled by darkness… there is only one ray of hope.”

What has made the trailer the talk of the town? It’s really good to see Ilayathalapathi Vijay in a Disney-like environment in his latest movie. Vijay has comfortably dabbled in commercial cinema for a long time. The last time he experimented with a role was a decade ago.

In the 2005 film ‘Sachein’, he played the title role, roaming around as a college student and falling in love with the prettiest co-student Genelia D'Souza. For ten years now, the actor has consciously stayed away from anything that smells out of the ordinary. To see him in a new magic box put together by Chimbu Deven is a welcome relief.

The trailer, which has already earned over 7 lakh hits, opens with the preface, “In a land ruled by darkness… there is only one ray of hope.” This reminds me of the great dialogue from Quentin Tarantino’s ‘Pulp Fiction’ uttered by Samuel L Jackson “The path of the righteous man is beset on all sides by the iniquities of the selfish and the tyranny of evil men. Blessed is he who, in the name of charity and good will, shepherds the weak through the valley of darkness, for he is truly his brother's keeper and the finder of lost children. And I will strike down upon thee with great vengeance and furious anger those who attempt to poison and destroy my brothers. And you will know my name is the Lord when I lay my vengeance upon thee.” 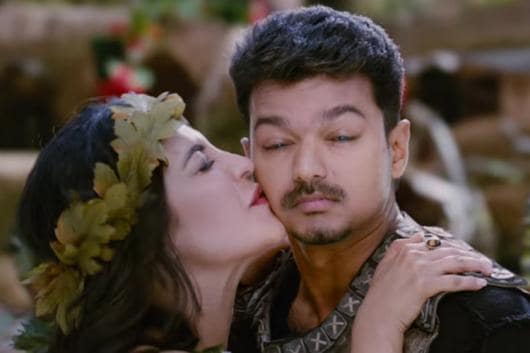 ‘Puli’ has definitely not received any blood from Tarantino’s film. One look at the trailer and you’ll know it’s a made-up world. For Shruti Haasan, this isn’t her first swim in the fantasy pool. Her 2011 Telugu film with Siddharth, ‘Anaganaga O Dheerudu’, was also a fantasy adventure. Sadly, the film turned out to be a turkey. Another opportunity has knocked on her door. I hope she has made good use of it. I’d be surprised to see a non-docile Hansika. From the beginning, she has essayed characters that are sort of bubble-frothy. I don’t think she’s going to surprise us here. 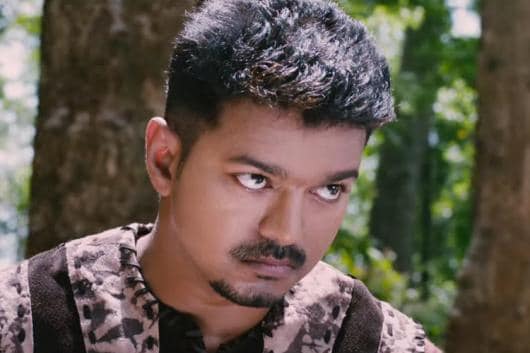 Sridevi has woken up from her slumber. Even if she hasn’t got the meatiest role, nobody would compete with her in the makeover department. Just look at her. She’s not Sri Devi anymore. She’s somebody else. Sudeep, too, is not far behind. So far, he has stayed mum in the trailers. Looks like he’s waiting to sprinkle some terrific performance.

Hey, by the way, what’s with Vijay’s blue eyes? They are significantly unworthy of his charm. And ‘Puli’ is no joke for the makers. It’s a big movie. Then why didn’t they give a thought to what would work as a punch line? Seriously, comparing dewdrop for love with tiger for enmity? That’s the best they’ve got?

The trailer is miles away from the hunky-dory station. But I’m going by what the trailer says… one ray of hope.