Saif Ali Khan and Hrithik Roshan's Vikram Vedha is a massy film that serves as a fun single-screen theatre experience. 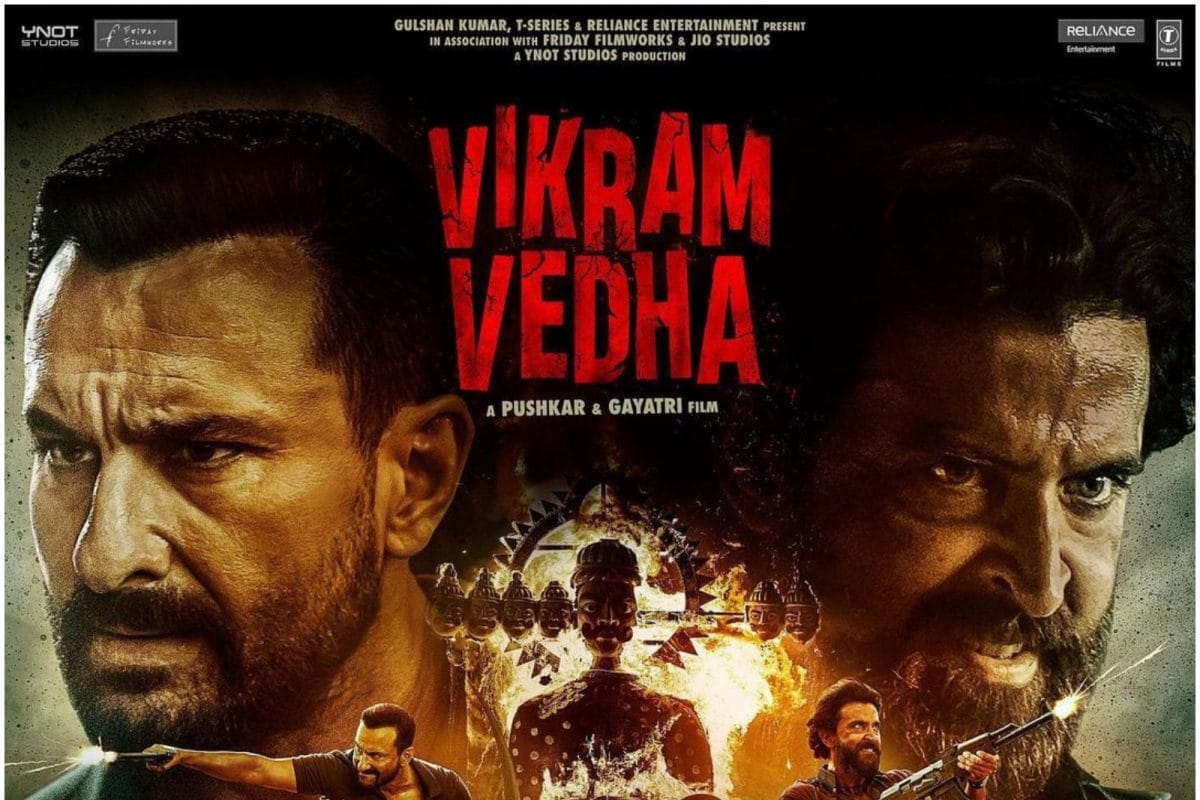 Back in 2000, the first time that Hrithik Roshan walked on the screen as Raj Chopra in Kaho Naa… Pyaar Hai, there was nothing less than fireworks in theatres. The actor won over the country with his charming smile and impressive acting. Those memories crossed my mind while I watched Hrithik walk in and out of scenes sporting the same charming smile but only gotten better with time in Vikram Vedha. A remake of the Tamil film by the same name, Hrithik is joined by the classy Saif Ali Khan, and together, they present a massy film that Bollywood has been longing for.

Before I dive into the review, I have to confess, I did not watch the original film. While I had the urge to watch it before the new Vikram Vedha was released, I chose not to because I wanted to experience the world director duo Pushkar–Gayathri build for viewers of Hindi cinema. Looking back, I think I am glad I chose not to give in to the urge.

Vikram Vedha is based on the concept of the folklore Vikram and Betaal. As the folklore goes, Vikram ventures into the deep dark forest to retract Betaal, a looming soul attached to a tree, to present him in front of a saint and help his kingdom. Vikram (Saif Ali Khan) in Pushkar and Gayathri’s world, is an encounter specialist who ventures into the deep dark world of Lucknow’s gangster world to drag out Vedha Betaal (Hrithik Roshan).

Much like the age-old tale, Vikram is intertwined in Vedha ‘Betaal’s’ stories, leaving him to choose between the right and wrong answers. If answered correctly, Betaal, or in this case Vedha, finds his way back to his tree and Vikram has to start the process of dragging him out yet again.

In the film though, questions are followed by a morally dividing tale which is narrated chapter-wise, all propelling the story further. In the process, Vedha slowly and steadily changes Vikram’s set-in-stone ideologies and shows him that everyone, including Vikram, is grey. The shift in morale takes the film in a new direction, even until the last twist.

While I am consciously refraining from revealing spoilers about the film, what I can tell you about Vikram Vedha is that it is a treat for the eyes, especially for Hrithik Roshan fans. Cinematographer PS Vinod helps Hrithik emerge as a massy hero yet again. Every frame celebrates Hrithik’s stardom. Pushkar, Gayathri and Vinod have added numerous slow-motion shots and wide-angle shots that project Hrithik as a larger-than-life man. While these are a visual treat during the first half, the slow-motion scenes go overboard in the second half.

The trio manages to balance out Hrithik with Saif. Although the film focuses a little more on Vedha and his tales, Vinod helps Pushkar and Gayathri make a flawed hero out of Saif as well. Two scenes that stood out for me with regard to Saif were the whole portion that establishes the crux of the film and the climax scene where he shares the frame with Hrithik.

The cinematography is elevated by powerful music by Sam CS. The score echoes in your ears long after the film ends. Besides the visual and audio experience, Vikram Vedha’s powerful weapon is a strong script. Written by Pushkar–Gayathri, the story doesn’t have a single dull moment. Pushkar and Gayathri ensure that every scene mentioned on the storyboard has a certain connection with the following scenes.

Although a great film experience, Vikram Vedha has its share of flaws. The film felt imbalanced when divided into two halves. The first half of the film features two chapters — one from Saif’s perspective and the other from Hrithik’s. The second half has too much going on. Not only do we get to see Vedha’s back story and his connection to Vikram, but it also features two subplots that form a crucial part in concluding the film. This leads to the second half becoming heavy. This could bother some people, especially those who’ve lost their patience to watch long films.

Another issue is Hrithik’s Awadhi accent. His accent is inconsistent and it becomes difficult to ignore. The green-eyed star also falls short while delivering heavy-weight dialogues, leaving a lesser-than-expected impact in some scenes. Saif on the other hand shines in every scene he’s handed. Steering away from his cop role in Sacred Games, Saif offers a fresh side to him and it is fun to watch him share scenes with Hrithik.

Bottomline: Despite its flaws, Vikram Vedha is a massy film that serves as a fun single-screen theatre experience. I’d suggest caving into Pushkar and Gayathri’s make-believe world and joining Vikram and Vedha’s cat and mouse chase.