Recently choreographer Terence Lewis was accused of inappropriately touching Nora Fatehi, but the actress defended him saying that it was a morphed video and she has always felt respected by Terence.

A clip from the show India’s Best Dancer is going viral on social media for all the wrong reasons. In the clip from the dance show, which has Nora Fatehi and Terence Lewis as judges, it can be seen that Terence is touching Nora inappropriately.

Since the clip surfaced on social media, many users are irked and are bashing Terence for the seemingly inappropriate act. Several Twitter users were furious at him and used derogatory terms for Terence.

Please name and shame this rascal. This is certainly some talent show and he's definitely some host. Who. https://t.co/AxfpxOsfUt

However, Nora has come to his defence, hinting that the clip which shows that Terence touched her in an improper manner has been morphed.

Terence posted a picture on Instagram where he can be seen carrying Nora in his arms. The photograph is from the dancing show India’s Best Dancer of the time when both the judges performed together. Nora and Terence are both dressed in traditional Indian attires.

A Zen Master and his disciples of monks were walking in the Himalayas back to their monastery. On their way to the monastery they had to cross the river Ganga flowing fully though less violently. There was an young beautiful maiden in distress, sitting close to the banks, whose village was just across the river. She was scared to cross the river by herself so she asked the elder monk to help her cross the river. "Sure" said the Zen Master and held her up in his arms. They crossed the river and he let her down gently as she went to her village after thanking the Master. The younger monk wasn't taking this all easily. He looked little worried. The monks came to their monastery after couple of hours of difficult walk in the hills, but the younger monk was still not settled. Sensing it the Guru asked him what the matter was. The young monk said "Master, we have sworn of not touching a woman, but you carried her in your arms, you tell us not to think of women but you touched her" complained the disciple. The Zen Master smiled n replied "I carried her across the river and left her on the other side. Are You Still Carrying Her ? " 🙏🏽 . . . Thank you @norafatehi for being the most elegant, dignified n classy guest judge & for your implicit trust in me! #zen #philosophy #pathofleastresistance #loveandkindness #indiasbestdancer @sonytvofficial #dance #norafatehi #terencelewis

The caption of his Instagram post is the story of a monk who carried a woman across a river in his arms. The caption says that the disciple of this monk gets disturbed with the idea of their master touching a woman — something that goes strictly against a monk’s pledge. Terence ended the post saying that replying to his disciples, the monk said that he carried the woman across the river and left her there. He asked them if they are still carrying her.

Replying to this interesting story, Nora said that in the time of video morphing and photoshop that is done to generate memes, she is glad that Terence has not let the negativity affect him and also remained poised and dignified.

She wrote, "Thank you Terrence! In todays time of social media video morphing and photoshop effects for meme purposes.. im glad you have not let it bother you and you have remained poised and dignified! This too shall pass you and geeta maam have been so respectful with me and have made me feel so loved and accepted as a judge on the show, its been a great life learning experience! Stay blessed." 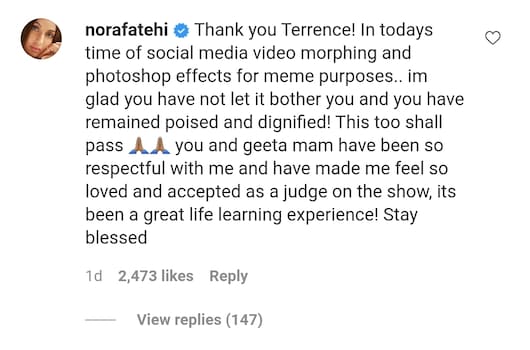 Nora added that she has always felt respected, loved and accepted by Terence and the other judge Geeta Kapoor. The Dilbar famed dancer Nora replaced Malaika Arora as a judge after the latter tested Covid-19 positive earlier this month.