Catch all the action from Day 11 of the Rio Olympics 2016 with our Live blog.

CONGRATS to @ButDeajahSaid and @bowie_tori who advance to the FINAL in the 200m! 🇺🇸 👟 pic.twitter.com/iYlV5uZKHc

The 1st #Athletics final of the evening is underway in the men's high jump, who will win it in this wide open field? pic.twitter.com/OA89hxidMO

Ruth Jebet #BRN picked up #Gold in the women's 3000m steeplechase final today, who will be medal winners tonight? pic.twitter.com/ooPbh7ZLTm

That's what you get for a smashing performance @Pvsindhu1! #SmashKartaJa #Rio2016 pic.twitter.com/HhuubgWYdX

The 1st #Athletics final of the evening is underway in the men's high jump, who will win it in this wide open field? pic.twitter.com/OA89hxidMO

Love is in the air ❤️ as triple jumper Will Claye makes fourth wedding proposal of Rio 2016💞https://t.co/Un21DWpxDL pic.twitter.com/kTq3ifOYfi

Sindhu plays the winner of this all Japanese QF between Okuhara in orange and Yamaguchi in blue pic.twitter.com/7074MfhdU3

18-18 now. Brilliant comeback from the Chinese.

It is no longer just Saina vs China pic.twitter.com/tBQMWmZuri

Sindhu extends her lead to 14-11. Crucial phase of the game now.

After winning the first game, Sindhu leading 3-2 in the second.

It's 19-18 for Sindhu now. Two points away from taking the first game.

PV Sindu wins two big points to make it 17-17 in the first game.

Sindhu makes another comeback and wins few crucial points. It's 13-13 in the first game now.

It has been neck and neck so far in the first game. Sindhu 8-11 WANG Yihan. Sindhu eyeing another comeback.

After trailing 0-3, PV Sindhu fights back to make it 5-5 against her Chinese opponent in the first game.

Court side Gopi eggs her on pic.twitter.com/6oarwe2bvh

Such a rush to bring #gold home for the first time #Rio2016 pic.twitter.com/Rl9c9sjnUE

The Olympic Champ is through to the semis pic.twitter.com/Lz5wl4v9oH

Badminton: PV Sindhu will be up in action vs WANG Yihan in Women's Singles Quarters shortly.

Sara Däbritz doubles #GER's lead in the Women's #Football semi-final over #CAN 2-0 pic.twitter.com/GZSLMVo5RS

#GER's Ludwig-Walkenhorst through to the final of the Women's #BeachVolleyball beating Larissa-Talita of #BRA 2-0 pic.twitter.com/PGgswBQ9Fc

Next up it's a @eurohockeyorg clash! #BEL vs #NED in 2nd semi-final! MASSIVE game! #Hockey at #Rio2016 pic.twitter.com/oVAUguMM94

The #ArtisticGymnastics floor exercise competition is moments away for the women. Drop everything and tune in! pic.twitter.com/tQjG4r32gN

The #SynchronisedSwimming duets champions will have medals around their necks after today's final. Starting now! pic.twitter.com/EQEwApc0mr

All locked up, scoreless at the break. Will there be a golden single goal to advance to the gold medal match? pic.twitter.com/TyD9RnBSjX

GOLF: Defending Olympic champions Germany knocked out of men's hockey 5-2 by Argentina in the semis.

GET SET FOR BOLT: Usain Bolt wins Heat with a time of 20.29 in the men's 200m. He qualified for the semifinals.

GET SET FOR BOLT Usain Bolt is on the track.

GOLD ALERT: Sandra Perkovic of Croatia wins the women's discus event with a throw of 69.21m.

Men'S 200m Heat 2: Bruno Hortelano of Spain pips Jamaica's Yohan Blake in the last couple of strides to finish in the first position.

LATEST IN THE NARSINGH YADAV DOPING CASE. READ BELOW:

Shock exit in the women's PV - Fabiana Murer has three X at her opening height 4.55 pic.twitter.com/dxAfNzlZKi

MEDAL ALERT: Christian Taylor of USA wins Men's Triple Jump Gold with an effort of 17.86. USA also won the silver with Will Claye while the bronze went to China's Bin Dong.

Hardeep Singh loses his Round of 16 match of 98-kg Greco Roman wrestling to Turkey's Cenk Ildem 1-2.

Greco Roman 98-kg Wrestling, Round of 16: One point for Hardeep at the start of round two. Score 2-1 now.

Greco Roman 98-kg Wrestling, Round of 16: A warning for Hardeep in that first round, and he loses it 2-0.

Hardeep in action now in the first round

6:40 pm Wrestling events on Day 11 have begun. India will be in action when Hardeep Singh takes on Cenk Ildem of Turkey in the Greco Roman 98-kg Round of 16 in 30 minutes from now.

What sportsmanship from Abbey D'Agostino and New Zealand's Nikki Hamblin, helping each other after 5000m heats fall. pic.twitter.com/71dYWd8FBc

#USA Steven Lopez competing at 5th #Olympics, 3 medals -only #Taekwondo athlete to do so. "I grow every time I step in the ring."

6:30 p.m. There are 12 men competing in the Triple Jump final. Christian Taylor of USA currently leading with a jump of 17.86 in his first attempt.

6 p.m. - Women's Doubles Badminton Semifinal: Misaki Matsumoto and Ayaka Takahashi of Japan are into the final with a 21-16, 21-15 win over Korea's Eun Kyung Jung and Chang Seun Shing.

This week's cover: The stars of a Red Hot American Summer! pic.twitter.com/slhs6sNbHc

5:45 p.m. - Women's Doubles Badminton Semifinal: The Japanese pair of Misaki-Ayaka is leading the Korean duo of Kyung-Seung 11-8 in the second game after winning the first 21-16.

Yesterday's #MarathonSwimming women's race was incredible, now it's the men's turn! They're off and swimming! 🏊🏊 pic.twitter.com/IyLdY7mwnw

5:35 p.m. As far as interest of the hosts is concerned, the home fans will be glued to women's football semi-finals in which Brazil will take on Sweden.

On Now: The women's doubles badminton semifinal between Japan and Korea.

Germany vs Argentina at 8:30 pm IST

5:05 p.m. The spotlight among international fixtures today will be on the Men's 200m Heat 9 at 9:15 pm IST, where Usain Bolt will bring the world to a standstill once again.

5 p.m. And you will surely love this victory dance by Mijain Lopez Nunez on the wrestling mat yesterday

Finish-line scenes don't get better than this. Shaunae Miller of the Bahamas (L) dived over the finish line to win the gold medal in the Women's 400m Final ahead of silver medalist Allyson Felix of the United States 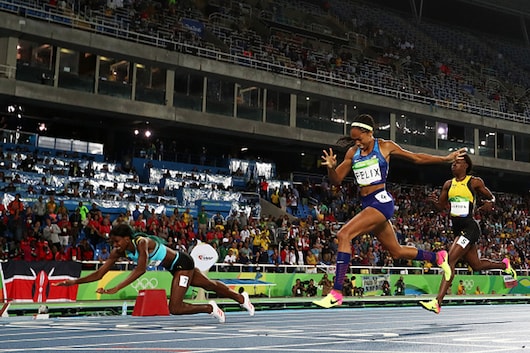 Her quarterfinal is the showpiece match of Day 11 for India, when the country will feature in only one other event. Hardeep Singh will wrestle in the Greco-Roman 98kg Round of 16 against Cenk Ildem of Turkey

Two-time World Championship bronze-medallist Sindhu advanced to the last eight of women's singles by notching up a dominating 21-13 21-15 win in 40 minutes over Chinese Taipei's Tai Tzu Ying yesterday which should serve as a good morale boost against the formidable Yihan.

The lanky player from Hyderabad and Kidambi Srikanth, who made it to the men's singles quarters, are the only two medal contenders left in the competition after the shock elimination of last Games bronze medallist and former world no. 1 Saina Nehwal two days ago.

PV Sindhu carries India's medal hope on day 11 of the Olympic Games here when she faces a daunting task against China's Wang Yihan, silver-medallist four years ago in London, in the quarterfinals.

Hello and welcome to the LIVE coverage from Day 11 of the Rio Olympics 2016.