Catch all the action from day fourteen of the Rio Olympics 2016 with our LIVE UPDATES.

Thank you all who joined us through Day 14 of the Rio Olympics. We will be back with you in about 9 hours from now. Good bye!

BREAKING: Usain Bolt leads Jamaica to 4x100m men's relay gold at Rio 2016 to take his personal tally to 9 gold medals at the Olympics. Bolt completes a world record of sweep of 100m, 200m and 4x100m relay golds at three successive Olympics since Beijing 2008.

Things we love about Olympic #BMX? Everything.

The women's pole vault is an amazing standard

India's women's 4X400m relay team will be in action shortly in heat 2.

India's Aditi Ashok had horrendous third round of eight-over 79 to drop 23 places to be tied 31st in the women's golf event.

Athletes who brought their country its first ever Olympic gold medal during #Rio2016 pic.twitter.com/qNBx9ebURq

Olympic #Gold is within grasp for #USA as the lead expands (11-4) against #ITA with 3 minutes to play. #WaterPolo pic.twitter.com/cORIZWdBAN

At the break: #USA 5-3 #ITA in a tight #Gold medal #WaterPolo match at the Olympic Aquatics Stadium #OlympicGames pic.twitter.com/ojbIMR3JOG

#ITA defeats #USA in men's #Volleyball semifinals. They will face #BRA or #RUS in final on Sunday. pic.twitter.com/aNFIPvjTHa

#ITA and #USA have taken the pool! The women's #Gold medal #WaterPolo match has begun! pic.twitter.com/gsdjiVNwu3

In other words, Aditi Ashok is struggling!

A fantastic match ! @caro_marin2 speed of movement and @Pvsindhu1 fighting qualities! Congratulations to both !

An olympic medal is the dream that keeps us athletes going every moment.The emotion of the medal cannot be explained pic.twitter.com/uoQZnFWdH7

I was there when an Indian won Silver in Badminton pic.twitter.com/rc9QS09dzg

This will be special - victory ceremony coming up pic.twitter.com/QnyxUJDLZH

We are grateful to Gopichand for the hard work and giving silver medal to country: Sindhu's father

Great fight back from @Pvsindhu1.. Right till the end.. The entire nation is Proud of you.. Heartbreaking but extremely proud of you

Have to admit Marin is a worthy winner. Class. Champion.

Badminton: Sindhu with couple of loose points. Down 10-13

Badminton: PV Sindhu is down 10-11 in the interval in the final game

Badminton: It's neck to neck here. 9-10 in favour of Spaniard

Badminton: Three consecutive points by Sindhu and the difference in now just 2 points. 7-9

Badminton: Couple of good points for Sindhu but she still trails 3-6

Badminton: PV Sindhu's body language not looking good at all. She is down 1-6 now

Badminton: Carolina Marin up 4-1 in the final game.

Come on India!!! This is the game that matters. Rooting for @Pvsindhu1 even more...

#GopichandPullela keep giving her your golden words!! You are a true star! Respects!! #PVSindhu #PVSINDHUFORGOLD

Badminton: Marin totally dominating the second game. She is up 14-7

Badminton: PV Sindhu is struggling in the second game. 5-12

Badminton: Carolina Marin is back with some style in the second game. She is up 11-2 against PV Sindhu.

Badminton: Carolina Marin up 6-1 against PV Sindhu. Indian needs to find her focus back

Badminton: PV Sindhu with slow start in the second game. Down 0-3

PV Sindhu is one game away from the gold medal. Come on!

Badminton: PV Sinhu wins first game 21-19. It has been an exceptional performance by the Indian

Badminton: It's 19-19. What a fantastic final it has been so far

Badminton: Superb rally and point for PV Sindhu. It's 16-17 now against the Indian

Badminton: It's getting tight here. Just one point in it now. 15-16

Badminton: Lots of unforced errors by both the players. PV Sindhu is down 13-16

Badminton: PV Sindhu down 11-15. She needs to hang in there

Hang in there @Pvsindhu1. Long way to go. Momentum will shift soon!! #badminton

Badminton: Three quick points for PV Sindhu. She is not going down without a fight here for sure. 9-12

Badminton: Carolina Marin is just at another level at the moment. She is up 9-5 against PV Sindhu

Badminton: PV Sindhu needs to up the ante fast. She is down 3-7 against World No.1

Badminton: Not looking good for PV Sindhu early on. Down 2-5 in the first game

Badminton: Both the players look pumped up. It's 2-2

Badminton: PV Sindhu walks into the court. History beckons for the Indian

Men's Race Walking: Sandeep Kumar maintains 50th position after 20km. He is 6:44 behind the leader

#PVSindhu Go for gold !! Be yourself & look within.At the cusp of greatness is when champions shine. @OGQ_India

Next on Aditi Ashok !

18.00: Bollywood actor Ranveer Singh said he is proud of ace shuttler P V Sindhu's performance at the Rio Olympics and hopes she will clinch the gold medal in the women's singles summit clash of the sports event.

I hope bosses are letting people go home early today. Or ensuring there are TVs at work. Be a sport!

Badminton: Lee Chong Wei levels the match at 1-1 with a 21-11 win over Lin Dan in the second game in the semi-finals

Men's Race Walking: Sandeep Kumar improves three ranks at the 10km mark. He is now 54th with a timing of 46:58. 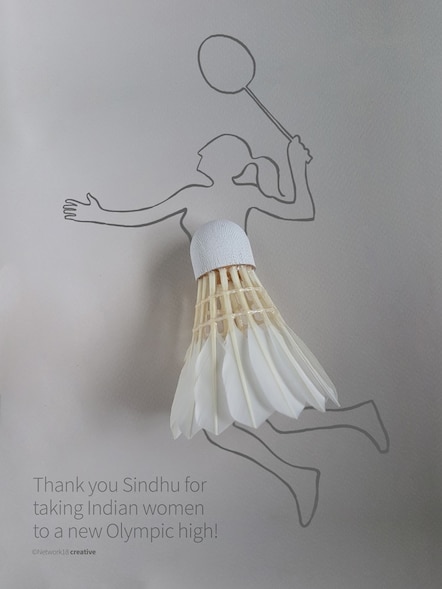