To resort to that old chestnut that he is a staunch feminist ally was disingenuous, writes Kaveree Bamzai. Photo: Twitter/@Actor_Siddharth

Or, he could take P.G. Wodehouse’s advice on how the right sort of people never want an apology and the wrong sort take mean advantage of it.

In a ranking of celebrity public apologies, actor Siddharth’s grovelling for his “subtle cock champion” description of Saina Nehwal wouldn’t rate terribly high. Either for the wit of the original tweet or for its retraction. We have seen ruder tweets and better apologies.

He called it a joke that didn’t land, saying that if it had to be explained, then it probably wasn’t very good to begin with (points for that). But to resort to that old chestnut that he is a staunch feminist ally was disingenuous. The mononymous actor is a habitual offender, but not so much against women as against the men who rule us. Sample this: ‘Need a compass urgently, what to do with this useless divider’ (December 14, 2021). And this: ‘Deepak Tyagi is the new Ajay Bisht. Orange is the new orange’ (December 23, 2021). Even in the tweet where he references Nehwal, she isn’t the real target. Nehwal’s tweet that set him off was about Prime Minister Narendra Modi’s security breach in Punjab.

The tweets where he does refer to women are so cryptic that they need many column inches to be explained, such as the one on October 2, 2021, saying ‘cheaters never prosper’. Yet the National Commission for Women has taken note of his tweet against Saina Nehwal, given its mention of a certain part of the male anatomy, and it is never a good idea to be on their radar. He has been booked on two counts: for publishing obscene material in electronic form, as per Section 67 of The Information Technology Act, and for words intended to insult the modesty of a woman, as per Section 509 of the IPC.

Perhaps Siddharth, who is clearly both educated and well-read, needs to seek advice from others who have tried to fight the cancel culture. He could begin with J.K. Rowling and learn how certain views are best kept to oneself especially if they involve communities who have been historically marginalised. Or perhaps he could check with singer-actor Justin Timberlake on how some apologies are so past their expiry date that they stink up the whole profile. Or better still he could take P.G. Wodehouse’s advice on how the right sort of people never want an apology and the wrong sort take mean advantage of it.

There are many online tutorials and TED talks on the art of the apology. Perhaps Siddharth could take a lesson from them. Or better still, like comedian Kapil Sharma who tagged Prime Minister Modi in a tweet where he asked angrily about acche din but also admitted to paying a Rs 5 lakh bribe, he could just blame it on the various spirits he had consumed. 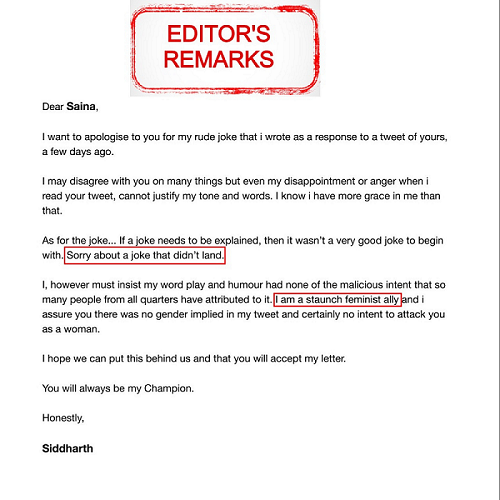 So what should Siddharth do if he doesn’t want to become the latest victim of what has come to be known as the cancel culture, where years of your life and career can be erased because of one offensive tweet/comment/act?

1. He could write a book about it, like Woody Allen, who has found himself ostracised by almost every notable Hollywood celebrity for allegedly molesting his own children, an allegation that has never been proved, but willingly adopted by many, including his former actors. The only problem is that the publishers might drop the book, as they did with Allen, who then had to go with a smaller publisher.

2. He could make an apology video like Karan Johar, who released a hostage video apologising for using a Pakistani actor in his film Ae Dil Hai Mushkil by almost tearfully flaunting his nationalistic credentials.

3. He could offer a counter apology like Ram Gopal Varma, who while apologising for doubting Kangana Ranaut’s “tall claim” on comparing herself with Hollywood greats (Meryl Streep, fyi) snarkily said he agreed now that no other actress in the world has ever had her versatility.

4. He could laugh about it. Like Shah Rukh Khan does, whether it is about his behaviour at Wankhede Stadium or when the recipient of his joke doesn’t understand it and asks him to shut up, as did actor Neil Nitin Mukesh at an award show.

5. He could stage a dramatic exit from movies. That would teach the haters, apart from driving them to tears.

The author is a senior journalist and former editor of India Today magazine. The views expressed in this article are those of the author and do not represent the stand of this publication.