Assam Elections: Why Stakes Are High for BJP in Bengali-speaking Barak Valley

In this election, the Congress-led Mahajot’s combined vote share, theoretically, can pose a strong challenge to the BJP-led NDA.

The electorate of Barak Valley and Central Assam are voting on Thursday in the second phase of the Assembly election in the state. Here, the ruling NDA government has a huge stake, primarily for two reasons. One, unlike upper Assam, this region has a significant Muslim population and the ‘Mahajot’ of the Congress, the All India United Democratic Front (AIUDF), the Bodoland People’s Front (BPF) and the Left parties is giving a close fight to the ruling BJP-led NDA. Second, the Barak Valley, one of the most beautiful places in Assam, is dominated by Bengali-speaking population (roughly 90 per cent), both Hindu and Muslim, that has been following the NRC-CAA issue very closely.

The Congress party which dominated the state and this region for decades has seen a gradual decline in its vote share. At the same time, the BJP has been getting stronger in this region, one election after the other (see chart 1). The AIUDF, a regional party with a strong presence in Barak Valley and Central Assam region, has been holding onto a significant chunk of votes, except in 2019 when the party did not contest the two parliamentary seats in the region following a tacit understanding with the Congress. In this election, the Congress-led Mahajot’s combined vote share, theoretically, can pose a strong challenge to the BJP-led NDA (see chart 2). 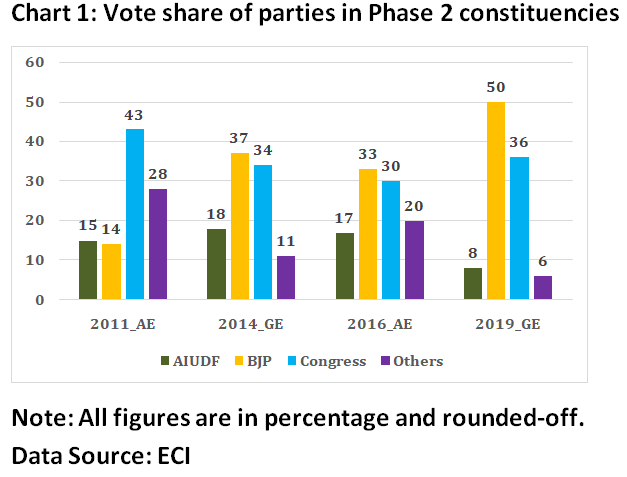 Except 2019 Lok Sabha elections, the combined vote share of the Mahajot in this region stands at more than 50 per cent. In 2019, the NDA got absolute majority in terms of vote share, with the alliance leading in 27 of the 39 Assembly constituencies (see chart 3), while UPA led in just 12 constituencies, including Kaliabor and Nagaon parliamentary constituencies, which were won by Gaurav Gogoi and Pradyut Bordoloi, respectively. While the vote share gap between the two major alliances was just 6 per cent, the NDA took a massive lead in terms of seats, because of the vote division between the AIUDF and the Congress in Barak Valley. Now that the two parties have joined hands, it would be interesting to see if they have managed to challenge the NDA’s dominance.

History and Politics of Barak Valley

This region, in the southern part of Assam, has three districts—Cachar, Hailakandi and Karimganj—where people speaking Bengali account for 90 per cent of the population. Together, they form the border districts of Assam, which have witnessed migration from neighbouring Bangladesh. When they settled in Assam remains a contested issue. This region has largely seen migration in three phases—first, in the late 19th century when this region was separated from the Bengal presidency. Second, when India was partitioned in 1947. Third, in 1971, when Bangladesh became an independent country. The Assam student movement in the late 1970s and early 1980s, which pushed the Assam Accord of 1985, had agreed to accept all migrants who had entered Assam prior to January 1966. Further, the government agreed to identify and deport those who entered Assam after March 24, 1971. However, the identification process of refugees took much longer and remains an unresolved issue to date.

The latest National Register of Citizens (NRC) 2019 for the state identified more than 19 lakh people who could not secure the registration in NRC, and among them most are Hindus and from the Barak Valley region. The announcement of the Citizenship (Amendment) Act was an attempt to secure the Bengali Hindu votes for the BJP, which has been supporting the party in this region (see chart 4 and chart 5). The BJP, which had just 17 per cent of the votes in 2011, increased its vote share three times to 51 per cent in 2019 Lok Sabha elections, while the Congress’ share fell from 48 per cent in 2011 to 26 per cent in 2019. The third major player in this region, Badruddin Ajmal’s AIUDF, has managed to hold on to its vote base. The Growing Dominance of BJP

Due to the significant number of Bengali-speaking Hindus in the Barak Valley, the BJP gained traction in the late 1990s when Atal Bihari Vajpayee-led NDA government was ruling at the Centre and the Asom Gana Parishad in the state. However, the BJP’s support base was way below the Congress’ because of strong local faces in the latter’s camp, namely Santosh Mohan Dev and Gautam Roy. The electoral politics of Barak Valley has undergone a massive change since 2014. The Congress has got weakened and the BJP has acquired the dominant space which the Congress was enjoying. Due to the significant Muslim population, especially in the constituencies in Hailakandi and Karimganj, the AIUDF is still holding onto a significant vote base.

In 2019 Lok Sabha elections, the BJP alone was leading in 13 of the 20 Assembly seats in Barak Valley. The BJP’s gain, in both 2016 and 2019 elections, was a result of the consolidation of the Hindu votes in its favour and the division of the Muslim votes between the Congress and the AIUDF.

In the 2016 Assembly election in Assam, the BJP-led alliance rode to power as people voted for change. In 2019, once again, people voted for Narendra Modi. This time, the BJP could be facing some discontent among its supporter base. For example, in Silchar, the BJP has denied ticket to the sitting MLA, who is now contesting as an Independent and may eat into the BJP’s vote share. Similarly, in Katlichera Assembly constituency, a young pan shop-owner I met expressed displeasure over the nominated BJP candidate. He was not alone as many other people I spoke to in the constituency felt the same. But will they vote a non-BJP candidate? After several minutes of conversation, the pan shop-owner said, “Do we have any other option? We are Hindu, who will we vote for, an AIUDF candidate?”

From the Mahajot, the AIUDF is contesting this seat. The AIUDF is perceived as a Muslim party and won the seat in 2016. This seat will not only have a direct contest between the BJP and the AIUDF but the voting is also expected to be polarized, almost naturally, where the Hindu voters are likely to give preference to the BJP despite their dislike for the candidate and the Muslim voters would possibly prefer the AIUDF.

The author is a researcher and election analyst. Views are personal.