Mohalla Classes Inadequate, Loss of Learning in Pandemic is Real. Our Study Proves It

India’s children, with the exception of a very small minority who have significant resources and support at home, have lived through a year of lost learning.

The schools of India, which have over 260 million students, have been shut since March 2020. In some states now, the schools are being reopened for higher classes, but on the whole, Indian schools have been shut for almost a year. During this period, two kinds of efforts have been made to continue with the education of children—online education and classes held in mohallas in the open. In brief, neither of these efforts has been adequate to compensate for the closed schools.

Online education is fundamentally ineffective. Not only because the vast majority of our children do not have resources to access online education, but also because the intrinsic nature of education and learning is such that it requires teachers and students to be in close proximity with real social interaction. This is not the place to go into the details of the inefficacy of online education.

However, the pandemic-driven enthusiasm for online education very quickly waned through last year, as the reality of its inefficacy hit home to all those involved with school education.

Realizing the importance of continuing educational engagement with children, while also recognizing the inefficacy of online classes, many state governments did a good job of trying to organize classes in the open, in the very neighbourhoods where children resided. Large numbers of government school teachers made this happen, with exemplary dedication. Such mohalla classes were not in any way increasing the risk of infection amongst those children, because the children were anyhow intermingling, given they were residing in the same neighbourhood.

Despite the best efforts of teachers and these state governments, given the significant operational difficulties, even in the best organized situations the mohalla classes did not amount to more that 4-6 hours a week, versus 6-8 hours of classes per day when the schools are open. It is also worth noting that such mohalla classes were initiated only around the end of the year. So, in effect, while such mohalla classes provided the much-needed engagement between the teachers and their students, from an educational perspective, they too were inadequate.

The result of all this, over the past year, is that India’s children, with the exception of a very small minority who have significant resources and support at home, have lived through a year of lost learning.

The loss of learning is of two kinds. First, what they should have learnt during this period, in 2020-21. Second, what they have forgotten from what they knew when the schools closed, since March 2020. The first kind of loss of learning is very obvious. If a child is currently in Class IV and has not attended any classes for the entire year, she has not achieved the learning goal for Class IV.

ALSO READ| A Year into the Pandemic, Does India Consider Running Schools an Essential Activity?

The second kind of loss of learning, let us call it academic regression, is not as obvious but once we pay attention to it, it is unsurprising. In essence, for example, that same Class IV child, not having gone to classes for the entire year, has actually lost touch with whatever she had learnt in Class III. And therefore, she has forgotten much of that learning. This phenomenon of ‘academic regression’ is much researched in the context of similar forgetting of learning during summer vacations, often called “summer slide”.

To assess the extent and kind of academic regression amongst our children, we conducted a research study across 44 districts of the country. Rigorous assessment was done of a sample of 16,067 children, with the help of over 2,000 teachers and 400 of our own team members, to evaluate what they had forgotten from what they knew in March 2020. The conclusions of the study are unsurprisingly alarming.

The details of the key conclusions of the study are in these graphics. 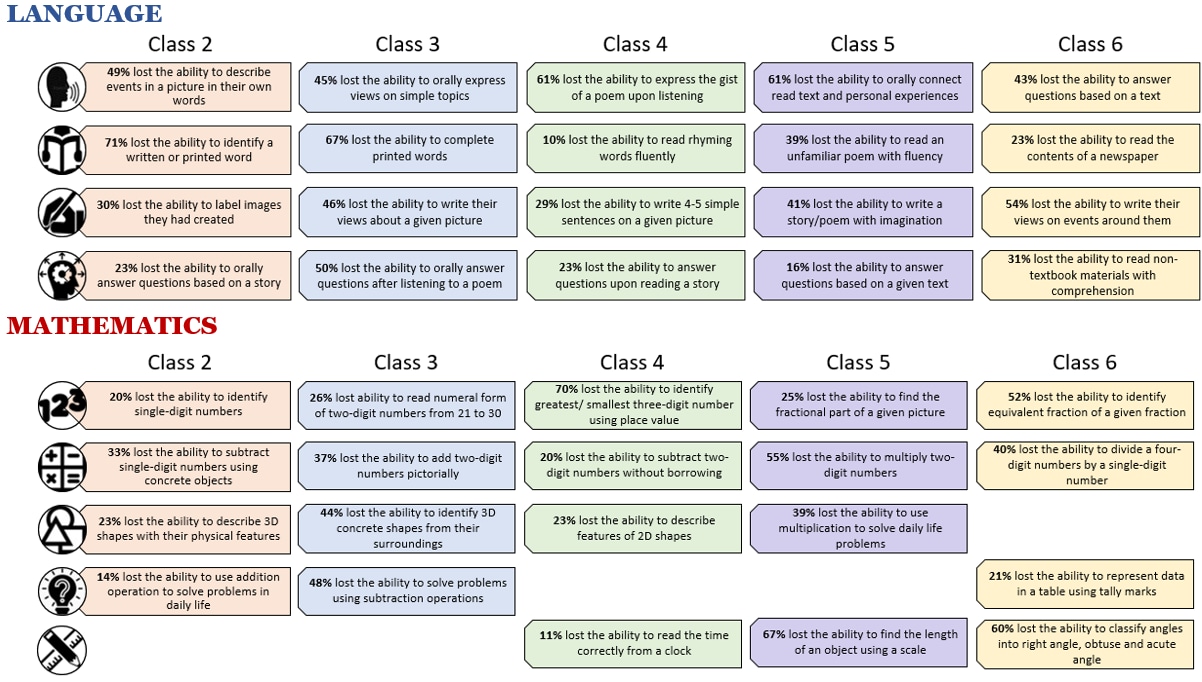 It is absolutely essential that we have a nationwide systematic response to this loss of learning—including the alarming academic regression. To start with, this will require recognizing and accepting this massive challenge. Since this problem has been created by an unprecedented pandemic and is not because of the omission or commission of any state government, there should not be any defensiveness in this regard. Hearteningly, some states are confronting this issue head-on and openly.

To address this serious issue, teachers will have to be given enough time to compensate for the loss of learning. This will require extending the current session well into 2021, not having summer breaks, and reconfiguring the syllabus in a way that some of the less-important content is dropped, while some of it is pushed out to the next year. Without adequate extra time, it is unrealistic to expect teachers and students to be able to deal with this challenge. Even with this extra time, teachers and students will require relevant support—for example, training and tools for the teachers to quickly assess the levels of academic regression student-by-student.

If we do not address the learning loss of our 260 million children that has happened during this year, the deficit will only accumulate. Also, this would affect disadvantaged children disproportionately more, widening and hardening the already existing inequities of our society. The challenge that the country faces requires nothing short of a massive nationwide mission.