Challenge to Nitish’s Popularity, No One to Play Spoiler: Why Bihar is an Open Game in This Election

The Bihar elections are an open game which could go in anybody’s favour and the contest would be held seat by seat, district by district and region by region.

While Lalu Prasad Yadav, patriarch of Rashtriya Janta Dal (RJD) is still in Jail, HAM-S chief and Dalit leader Jitan Ram Manjhi has joined NDA again. The RLSP no longer has cordial relations in mahagathbandhan and the Nitish Kumar-BJP alliance is in full force. And yet, the upcoming assembly elections in Bihar will not be an easy battle for anyone. This analysis is not based on the outcome of 2015 elections where mahagathbandhan had swept the election. It is based on the analysis of 2010 assembly poll results in which the BJP-JDU combine swept the polls with winning 206 out of the total 243 seats. 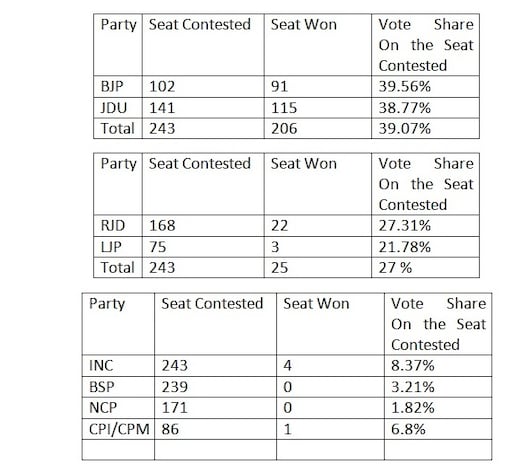 A close study of the above figures reveals that Had the Congress not contested on all seats and was part of alliance of RJD LJP like 2004 Lok Sabha or 2005 assembly elections, the BJP-JDU combine would not have secured this big a sweep by winning 85 per cent seats. Even the CPI/CPM, whose vote share could never go to a combine which the BJP had, would have the capacity to alter result in many of 86 seats where they polled around 7 per cent votes. The NCP also played spoiler and secured 1.82 per cent votes in 171 seats it contested.

On a conservative assumption that all votes secured by any party would not necessarily get transferred to any combine, a substantial share of these votes around 8 per cent could very well have been transferred to the RJD-led combine. In that scenario, the BJP-JDU combine would certainly not have won 206 seats. The results of some of the seats also confirmed the said logic.

This was the result in 2010 when the charm of Nitish Kumar was on the peak and so was the dislike for Lalu Yadav. Now, with 15 long years of anti-incumbency, Nitish himself is not so popular and cannot be considered as a vote catcher as before. His reputation with minorities and core socialist voters has also gone down. The BJP has realised this aspect and that is why it is seeking an equal share of seats in the alliance. In the past, the JDU contested on 141 seats and BJP had only 102.

Given that this time RJD/INC/JMM/CPI/CPM are likely to contest in alliance which would compensate for the loss of LJP not being there. The RLSP is likely to remain a part of mahagathbandhan whereas the LJP’s continuation with NDA is no longer certain. The Bihar elections are an open game which could go in anybody’s favour and the contest would be held seat by seat, district by district and region by region.