If any leader, after Mahatma Gandhi, has been able to implement political voluntarism on the ground successfully, it would be Prime Minister Narendra Modi.

The desire of the present generation to free India from evils of corruption, filth, poverty, terrorism, casteism and communalism and set it onto the path of development seems analogous to a time when the nation was reeling under foreign rule.

The desire to free the country was felt in every Indian’s heart. During that time, Mahatma Gandhi mobilised people’s power to strengthen the fight for freedom. If any leader, after Mahatma Gandhi, has been able to implement political voluntarism on the ground successfully, it would be Prime Minister Narendra Modi.

He has made Jan Bhagidari or people’s participation a mainstay of governance. He has been at the forefront of tapping the latent force of mass participation. From Swachh Bharat Abhiyan to ‘Give it Up’, people have come forward in large numbers to support the noble initiatives, in the interest of the nation.

Though Narendra Modi has implemented the participatory model of governance since his tenure as the Chief Minister of Gujarat, it was at the time of general elections of 2014, that his experiments were actually put to test for the nation to see. During the 2014 elections, a vast number of youngsters, driven by the passion to do something for the country, contributed to the Modi campaign in a big way. The innumerable scams of the UPA government were tumbling down dime a dozen and there was a greater urgency to rid the nation of policy paralysis that had seeped in governance.

Narendra Modi, who has always been known to use technology as an integral campaign tool, deployed it in a manner that could not only be helpful in reaching out to a wider number of voters in the shortest time possible but also to channelise the growing unrest among the youth. The stakes of that campaign were indeed quite high, and therefore, there was greater enthusiasm among the young crusaders to exercise their right to vote in a way that puts the nation back onto the growth path. 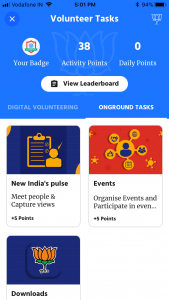 It was a unique campaign with respect to the huge volunteer base that associated with the Modi campaign organically, owing to the power of technology. For the first time in India after independence, political volunteerism had come to define the main discourse in the election. Communication was dispersed, democratic and dynamic. It did not limit to a few anchors, intellectuals or news channels.

Since then, political communication has completely transformed. The BJP, especially, under PM Modi has been pioneering the use of digital means to garner wider support from all over the country.

In the last four years, more and more people have gravitated towards the party, from different walks of life, than ever before. It has allowed people to voice their opinion freely and frankly through various digital platforms. Continuing that trend, the BJP launched a “Volunteer” module on the NaMo app to reach out a cross-section of people who want to contribute in the building of a New India and in a way, be instrumental in making history. The new module takes a very innovative approach to engage people in the process of nation building. It sets out a list of tasks that the volunteer can perform to gain points. The name of the volunteer, with the highest points would feature on the ‘Leaderboard’. These tasks are broadly divided into two sections: Digital Volunteering and Onground Tasks. The former contains a bank of information, shared by the volunteers themselves, that can be read, shared and discussed by others on various digital platforms including Twitter, Facebook and even Whatsapp. The latter requires the volunteers to step out and contribute through conducting surveys, organising events around various national causes and so on.

The new module attempts to fortify individual endeavours into collective action with an aim to create history. If you want to be a part of the making of a New India, you can start by downloading the NaMo app and take part in the activities lined up on the panel. The app provides a concrete direction to the multitude of aspirations, ideas, skills and interests held by citizens and gives them a proper channel to express and share. The updated version of NaMo app is also equipped with the ‘Donation’ and ‘Merchandise’ modules. While the former exhorts to show support through donations, the other encourages to stand up for what one believes in.

For the last four years, the entire nation is joined in fulfilling the vision of New India. People are optimistic but also have a tinge of restlessness to make things happen. Under the Modi government, constant efforts are being made to tap this growing urge to widen the scope of government initiative by making them people driven rather than government driven. The flame for nation-building now burns within every Indian and the new platform is providing a concrete channel to ensure that it happens.

(Author is advisor to Prasar Bharti and a senior journalist. Views are personal)