Happy Republic Day. The Padma awards for 2018 are out.

Illustrious Ilayaraja, the maverick music composer, gets the second highest award of Padma Vibhushan. The versatile cricketer, MS Dhoni, gets an award a notch lower, the Padma Bhushan. Unlike in the past, the awards list contains names of people not commonly known. There is actually none from the storehouses of retired VIPs of Lutyen’s Delhi. An effort was certainly made to recognize ordinary Indians doing extraordinary service in various fields.

The ethereal pips the real. The field of spiritualism, the ancient Indian mood mantra, is represented by five awardees; six if you throw in the practice of Yoga. In contrast, the gate-keeper of material or technological progress – the field of science and engineering – is to be satisfied with four nominations. The stress on physicality aspect of development is underscored by six sportsmen winning the awards. The panacea for all ills – the field of medicine – gets seven awards. All fields of medicine – Indian traditional to modern Western and palliative are represented.

But we Indians are political animals. That field alone excites us, sufficiently enough to stretch the outer limits of statistical probabilities to come up with a presumed political analysis of the awards. Such an exercise, undertaken by yours truly, throws up the following — for want of a better word — coincidences:

Current emphasis of the BJP is on the following states:

The following states go to polls in 2019: 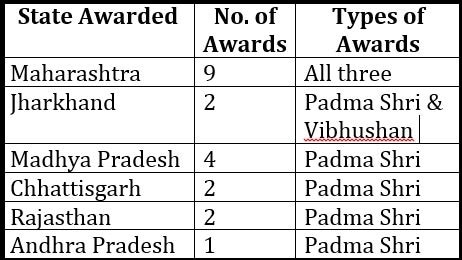 State where election dates have been announced:

The BJP was happy with the election result in these states: 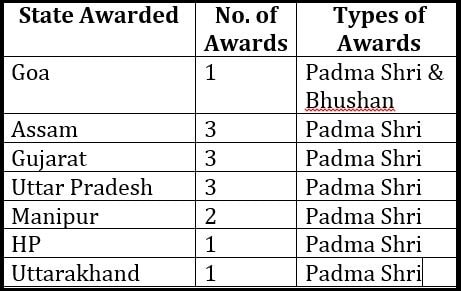 One Padma Shri awardee was from J&K, always a special case considering the sensitivity of the state.

Interestingly, the 2018 awards saw the presence of many foreigners. The fields of expertise of the winners may be anything; it is the nature of the relationship with India that gets underlined. Here is the full list: The big two – Russia and USA – are naturally there at the top. Oil, jobs, remittances and Haj --- sufficient reasons for good ties with Saudi Arabia, apart from current agreements on terrorism – remember Pakistan? Its fight with radical terrorism and its critical link to peace in Afghanistan where India desires an active role make Tajikistan a dear ally.

Then there’s China. It is not on the list, but its presence looms large. India is friends with Japan – thick at that – much to China’s discomfiture. India is actively countering – in diplomatic yields – China’s overtures to neighbouring Nepal. The last 10 countries are members of ASEAN: their heads of state stayed back after the cooperation summit meeting in New Delhi on January 25 to be the chief guests at the Republic Day parade. While the awards are commemorative of their presence, it has not gone without notice that most of them have maritime disputes with China. The focus on maritime cooperation at the ASEAN summit and the stress on freedom of navigation – with quiet reference to the South China Sea – in the Delhi Declaration of the ASEAN-India Cooperation Summit are self-explanatory.