As much as we hate to see graphic images on cigarette covers, morbid PSAs, and annoying disclaimers during movies, they have been drilling the harmful effects of tobacco use into the psyche of Indians for years.

Although not as memorable as 'SMOKING KILLS' or 'SMOKING CAUSES CANCER' this new catchphrase will now be displayed on cigarette packets from September 1, 2018. A report says that a toll-free helpline will be set up to "create awareness among tobacco users, and give them access to counseling services to affect their behavior"

This helpline or quit-line (as it is being referred to) happens to be a new addition to The Ministry of Health and Family Welfare's enthusiastic decade-long campaign to curb tobacco consumption in India.

As much as we hate to see graphic images on cigarette covers, morbid PSAs, and annoying disclaimers during movies, they have been drilling the harmful effects of tobacco use into the psyche of Indians for years. Therefore, please make peace with those not-so-subtle warnings if you haven't already. Those unimaginative PSAs in which a child is affected by her father's smoking habit or the one in which everyone in public is coughing their lungs out are here to stay. The scary images that appeared on cigarette packs about a decade ago will continue to grow bigger in size and no one can smoke in a film with a disclaimer reminding you that 'dhumrapan sehat ke liye hanikarak hai'.

As much as I hate to watch these things, it is hard to not see the point that the government is trying to drive home. None of these adverts, reminders or images are supposed to be aesthetically pleasing, they are in fact made intentionally gruesome so as to dissuade consumers of tobacco from using it. They are meant to be informative.

However, with above 90 percent of the adult population already aware of the harmfulness of tobacco products, is an information campaign the most effective policy to reduce tobacco usage? 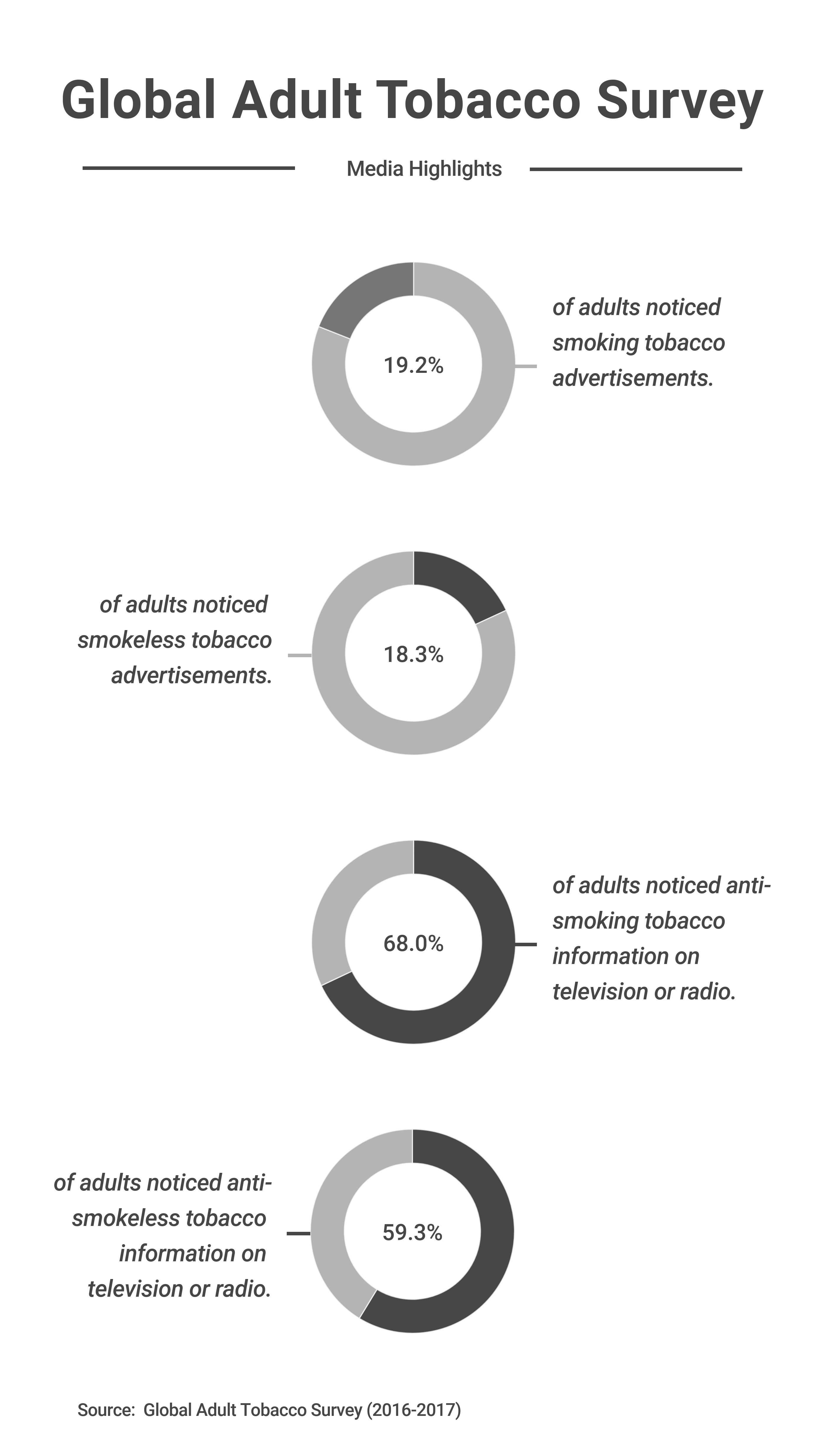 Most smokers are aware of the harmful effects of tobacco usage. However, this information isn't enough to motivate smokers and tobacco users to quit consumption of tobacco.

The fundamental issue here is that quitting is primarily a self-control problem. As the 2017 Nobel laureate Richard Thaler and his co-author Cass R Sunstein tell us in their wildly popular book 'Nudge' our 'planner' self decides to quit while our 'doer' self fails to follow through the plan.

Smokers and tobacco users often show addictive patterns of behavior and it is not that they do not want to quit smoking but in many cases, despite repeated tries, they fail. The habit of smoking or tobacco consumption often becomes so internalized in people that they do not even register the pictorial warnings on tobacco and cigarette covers.

However, the important thing to notice here is that the survey measures intent as opposed to actual outcome. At any given point, the intent is hardly a good proxy for actual outcome. No one has ever doubted a smoker's intention to quit. All the 'planning and thinking' smokers do are often well-documented rants on social media platforms or stuffs that new year resolutions are made up of. Mark Twain has once said, "Quitting smoking is easy. I have done it a thousand times". However, 'the intent to quit' doesn't mean much.

The only tangible outcome that the GATS 2 shows us is that the average monthly expenditure on bidis have more than doubled and on cigarettes have more than tripled from Global Adult Tobacco Survey 1(2009-2010) to GATS 2 (2016-2017). This is a significant increase even after adjusting for inflation and tobacco taxes in India.

Will behavioral nudges will be helpful?

Information about the harmful effects of smoking alone will not motivate smokers to quit. What smokers would also need are programs and policies designed on behavioral nudges. Since the problem of quitting is mostly associated with commitment and motivations to quit, if the stakes involved in motivating smokers were higher chances are they would be more likely to quit the habit.

One good example of a behavioral nudge is an experiment designed by Dean Karlan, Xavier Gine, and Jonathan Zinman. They designed and tested a voluntary commitment device to help smokers quit smoking.

The social experiment called CARES (Committed Action To Reduce And End Smoking) offered smokers a savings account in which they deposit funds for six months, after which they took a urine test for nicotine and cotinine. If they passed the test, their money was returned; otherwise, their money was forfeited to charity.

The study was conducted as a randomized control trial (RCT) where 640 randomly chosen smokers were offered a CARES account, while another 600 more smokers were monitored as a control group. It was found that those participants who were offered CARES saving accounts were 45 percent more likely to quit smoking than the control group.

It shows that when people have something at stake, be it money or reputation, chances are they would follow through with their plans of quitting. With more social experiments such as these more smokers can be incentivized to quit.

From GATS-1 to GAT 2 the prevalence of tobacco use has reduced by six percentage points, which means that the number of tobacco users have reduced by 81 lakhs. While this is good news, it still doesn't take away from the fact that almost a million of people die every year because of diseases and problems related to tobacco use.

Today as we celebrate World Health Day, let's hope that our government does not solely rely on an information campaign to curb tobacco consumption and incorporate more social experiments that give behavioral nudges to smokers and tobacco users and help them to quit tobacco for good.