Of the long and misogynistic association of fruits and females.

A video of an alleged Sunni preacher in Turkey has gone viral on social media, and many are now debating his words. The man in the video, holding two apples - one skinned and one unskinned - seems to be saying, "A peeled apple attracts germs. Women should cover themselves like an apple".

Though the source, location and date of the video is unconfirmed, Turkish authors like Edip Yüksel have confirmed on Twitter that the man is possibly a Sunni preacher in Recep Tayyip Erdoğan's Turkey. Australian Islamic reformer and commentator Mohamad Tawhidi who is famous on Twitter as the "Imam of Peace" also shared the video.

Islamic Extremist from Erdogan’s Turkey: "A peeled apple attracts germs. Women should cover themselves like an apple" pic.twitter.com/DMqV6MV7jW 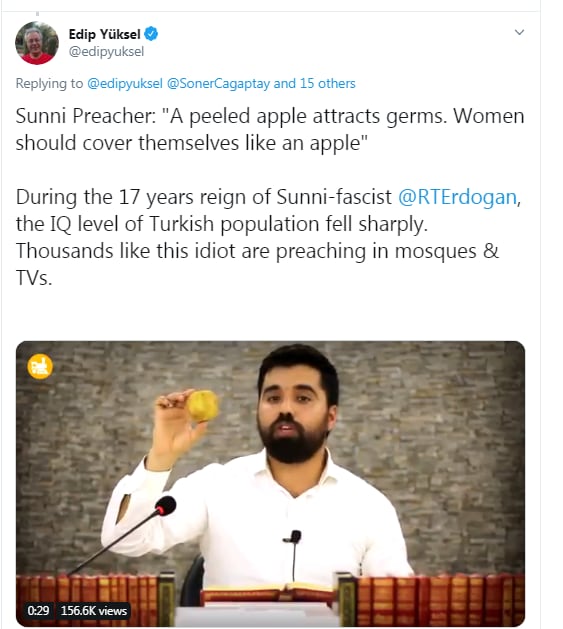 While preachers may have a way of speaking in riddles, the pointed "teaching" in this particular sermon about apples and women is clear as day - Women, like apples, are only consumable when not under attack by germs. When do germs attack both apples and women? When apples are unskinned or women unclothed (or not fully clothed, for the sake of accuracy). Much like the apple, the preacher thinks women too have no agency or will of their own. Much like germs, the preacher thinks men too have no sense of boundaries or laws. Just a layer of apple peel or clothing stands between apple/women and germs/men. Apart from being an awful lot like the go-to line of a victim-shamer convinced that incidence of sexual assault is inversely proportional to the length of a woman's skirt, such objectification of women is not entirely new. A popular anecdote about women in Islam identifies them with candy bars. Just like a man wouldn't pick a wrapper-less candy bar from a dirty floor, he would not pick an uncovered woman to be his wife or girlfriend. The meme version of the story often pops up on social media feeds.

/pol/ discusses the importance of the Hijaab in Islam. from r/4chan

And it's not entirely the misguided Turkish preachers' fault to liken women to perishable fruit. A cursory look at the words in use to describe, address and refer to women or womanly qualities, surprisingly, are mostly fruit names.

Think about women's bodies. Even today, "pear-shaped" is one of the most used terms to describe body-types with narrow shoulder and heavier bottoms. Those who are "round" in the middle with skinny arms and legs (yes, that's how specific body types for women are) are called, you guessed it, apples. A new "body-shape guide" recently described Kim Kardashian as a "double cherry".

In the west, endearments for women often include food metaphors. Words like "pumpkin", "sugar", "honey" have been is (mis)use for ages to address women. Women's breasts have been referred to as oranges, melons or lemons, depending on size. Women with red lips have been called "cherry-lipped". A "peachy" bum is one that is curvaceous and can bear a number of children.

Not just women. Patriarchal, English-speaking men and women have often used the word "fruit" to target non-binary men who did not fit into their idea of masculinity.

So fruits = female or non-manly male. This kind of linguistic degradation of women was pointed out by feminist scholar Muriel Schulz's in her 1975 article "The Semantic Derogation of Women". In another essay, Caitlin Hines termed it the "women as dessert" metaphor. The idea here is not just that women are like objects but that they are like sweet, delectable, perishable objects whose special traits (smiling, compliant, docile, pure) need to be guarded and developed for optimum results, ie, to make her a tasty fruit.

So when a Turkish preacher goes on to call immodest women potential bad apples, no one is surprised. It is nothing but another adventurous fruit discredited by patriarchy.