Home » News » Opinion » Will Women Come to the Rescue of Mamata in Bengal Like They Did for Nitish in Bihar?
4-MIN READ

Will Women Come to the Rescue of Mamata in Bengal Like They Did for Nitish in Bihar?

Data from the past few elections in West Bengal suggests that increased poll participation by women in the state favours the Trinamool Congress.

West Bengal is all set for a high-stakes assembly election, the likes of which have not been seen in recent times. Mamata Banerjee, the lone woman chief minister in India right now, is facing a tough challenge on her turf from a surging Bharatiya Janata Party. Her party, the Trinamool Congress, has been bombarded with some tough questions by rivals about alleged corruption at the local level by cadres. But, at the same time, her supporters point to a slew of women-centric welfare schemes like Sabooj Sathi, Kanyashree, etc, meant for the betterment of ‘Aadhi Abadi’, or half of the population.

The Bihar assembly elections last year showed unprecedented participation by women in the last two of the three phases. This was significant and many commentators have argued that women, due to some women-centric schemes launched by the Nitish Kumar government, saved it from losing the polls. So will Didi will get the same benefit or not? Data from the past few elections in West Bengal suggests that increased poll participation by women in the state favours the TMC.

Women voters in elections: Trends in Bihar and West Bengal

The turnout of women voters has been steadily growing across states in the past three decades. The ‘Second Democratic Upsurge’ theory by Prof Yogendra Yadav has already mentioned this. It is interesting to see that states like Tamil Nadu, West Bengal, etc, where there was political mobilisation more than identity politics, had seen a massive jump in the turnout of women voters in the 1980s itself. In both states, women’s participation crossed the 70 per cent mark at the beginning of the 1980s. However, states like Bihar, Uttar Pradesh, etc, have seen a rise in women’s turnout since the 1990s, but have still not reached even two-thirds of the women electorate.

If we look at the decadal trends in Bihar and West Bengal, it’s clearly visible that both the states have seen a significant increase in women’s turnout. However, Bihar is still very far behind Bengal. In the last decade, women’s turnout in Bihar was 58 per cent while in West Bengal it was 84 per cent. 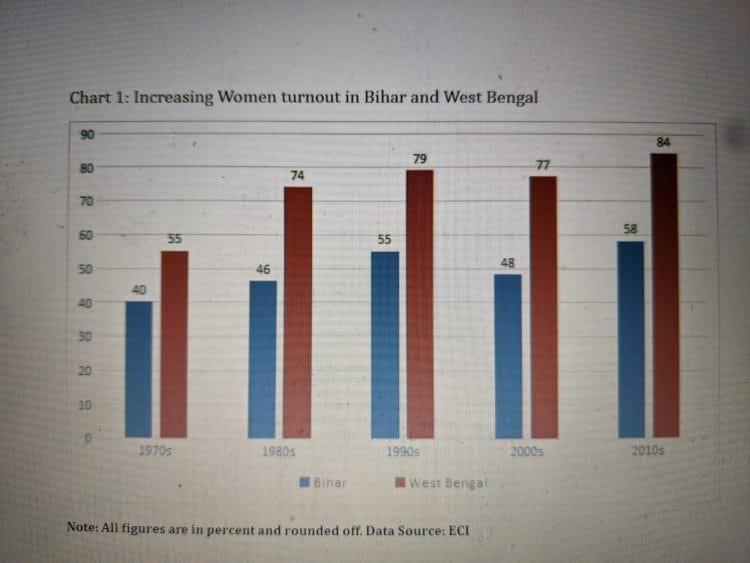 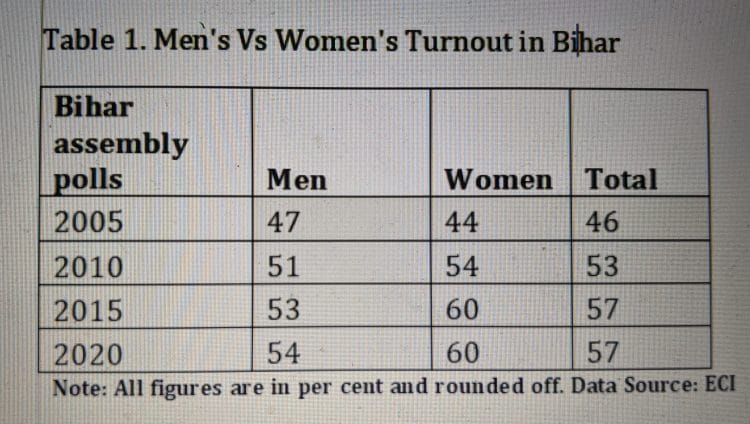 As mentioned above, women’s turnout in West Bengal has already crossed a significant point in the 1980s. However, in the past few elections, it has crossed the 80 per cent mark and has maintained it in the previous three assembly elections (see table 2 below).

In 2011, when Mamata Banerjee led the TMC to power, women’s participation surpassed the men’s turnout. Even in the 2016 assembly elections, this trend continued.

Many claim that the support of women for Mamata Banerjee is due to the implementation of women-centric welfare schemes by the incumbent government. However, past post-poll data collected by Lokniti-CSDS suggests that the support for the Trinamool Congress has been continuously growing since 2006 in each and every assembly and parliamentary election. 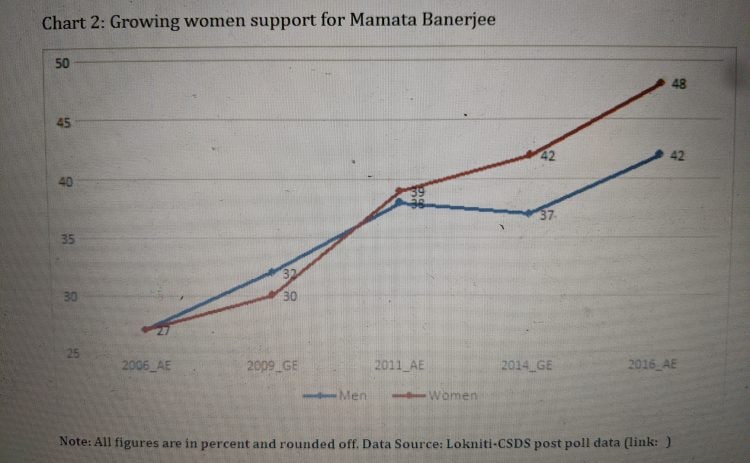 In the 2016 assembly election, 48 per cent women voted for the TMC in the state. This number was six percentage points higher than the men’s. It is important to note that the Trinamool got 45 per cent votes in all, which is three percentage points less than what it got from women supporters.

The TMC this time has given tickets to 50 women candidates, which is more a sixth (17 per cent) of the total seats. This number is the highest ever for any ruling party in any assembly election, especially in a large state. Women voters in West Bengal constitute about half (49 per cent) of the total electorate. Only three states, Tamil Nadu, Kerala and Andhra Pradesh, have more than 50 per cent women voters.

In the 2019 Lok Sabha elections, the women’s turnout was 82 per cent in West Bengal. While the electoral participation of women in elections in West Bengal remains high, the question is will women once again support Mamata in large numbers as they have done in the past, and will that support save the TMC government as it happened with the NDA in Bihar?

The author is a researcher and election analyst. Views expressed are personal.