On July 24, Leichombam had posted a picture of MP Sanajaoba Leishemba and Union Home Minister Amit Shah on Facebook under the caption - ‘Minai macha’ (‘Son of a Servant’).

Karishma Hasnat
A case of sedition has been registered against political activist and convenor of Peoples Resurgence and Justice Alliance (PRJA) Erendro Leichombam over his ‘objectionable remarks’ on social media against newly elected Rajya Sabha MP from Manipur Leishemba Sanajaoba.

The case has been registered at the Porompat police station in Imphal (East). Leichombam has been booked under sections 153 (wantonly giving provocation with intent to cause riot), 124(A) (sedition) and 505 (statements conducing to public mischief) of the Indian Penal Code, said Jogeshchandra Haobijam, Superintendent of Police, Imphal East district.

On July 24, Leichombam had posted a picture of MP Sanajaoba Leishemba and Union Home Minister Amit Shah on Facebook under the caption - ‘Minai macha’ (‘Son of a Servant’). 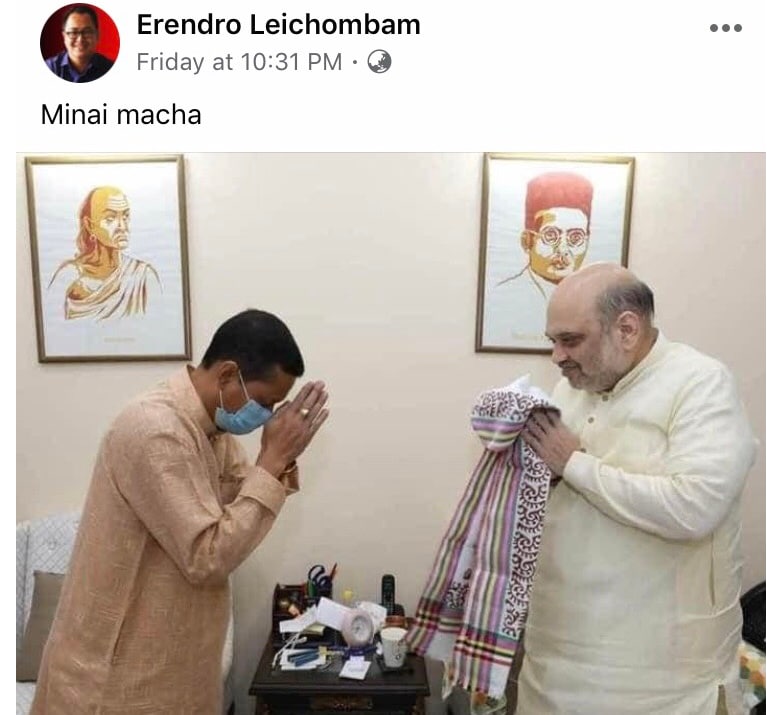 In the image, Leishemba, who is also the titular king of Manipur, is seen bowing before Shah with folded hands in a gesture of gratitude.

“How does calling someone ‘servant’ fall under sedition? They are now going through all of my previous posts for legal justifications. I am afraid they will do the same to me - what they had done with Manipur TV journalist Kishore Chandra Wangkhem. He was in jail for almost a year,” said Leichombam.

He was first arrested in November last year and released in six days only to be sent to prison under NSA two days later. He was released in April last year after completing a one-year jail term.

A day after Leichombam’s Facebook post “went viral”, a team from Manipur Police landed at the activist’s residence in Thangmeiband, Imphal West, on Sunday midnight.

“They came to our house and asked for Erendro. They also said it would be good if my brother takes down the post,” said Leichombam’s younger brother Sikendra.

Reacting to news of Imphal Police registering a case against him, Leichombam once again took to Facebook late Tuesday evening to write, “You can imprison my body, but how will you imprison my mind?”

In a subsequent post, he said, “MK Gandhi, Tilak, Arundhati Roy & Hijam Irabot. Today, I proudly join them. Sedition 124(a) is a colonial law. Biren Singhji is a puppet of Hindutva colonialism.” 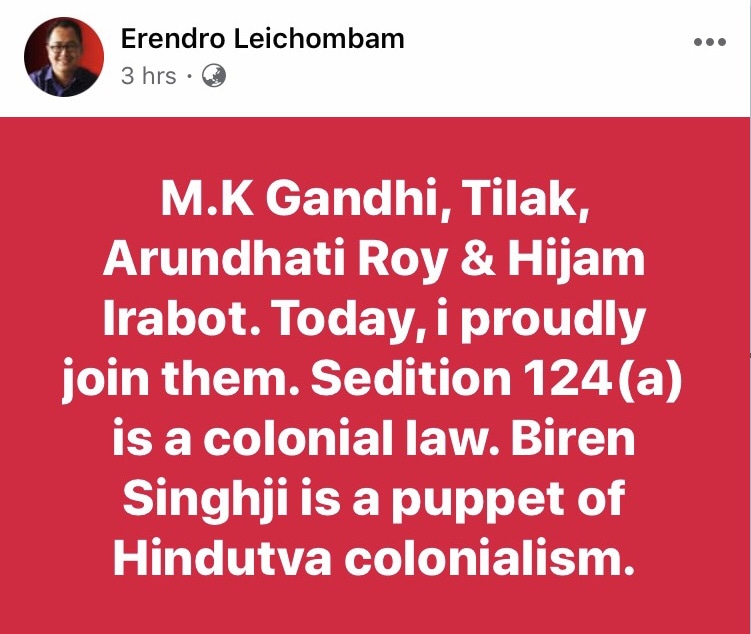 Leichombam, a Harvard postgraduate in economic policy, has an impressive fan following in social media.

He had unsuccessfully contested the Manipur Assembly elections in 2017. PRJA was formed the same year with Irom Sharmila Chanu being the mascot of the regional party.

In 2018, Leichombam was arrested for refusing to take down a video containing inflammatory speeches from his Facebook profile -- he had questioned the Manipur Police for not arresting those who created the hate video and circulated it on social media.

The young activist was then booked under relevant sections of the IPC and IT Act for criminal intimidation and allegedly promoting enmity between different groups.

“They have tried to arrest me on uncountable occasions. They arrested me once. But this time, it’s sedition,” said Leichombam.

In February 2019, a student leader from Manipur, Veewon Thokchom, was arrested in Delhi on sedition charges and later brought to Imphal.

The 24-year-old activist was booked for raising voice against the Centre’s intent to implement Citizenship (Amendment) Bill - a move that had witnessed massive protests across the northeast.

The Citizenship (Amendment) Act, 2019 (CAA) was later passed by Parliament on December 11, 2019. The CAA amended the Citizenship Act of 1955, thus, paving way for persecuted non-Muslim minorities from Pakistan, Bangladesh and Afghanistan to avail Indian citizenship.
Tags