Allies Give BJP's Pro-CAA Rally in Chennai a Miss, AIADMK Vows to Protest against NRC if Needed

At the BJP rally in Chennai on Tuesday. (News18)

For the BJP, the rally didn’t turn out to be the way it would have wanted with two of its key allies, namely the ruling AIADMK and PMK, staying away from the event.

Chennai: The state unit of the Bharatiya Janata Party (BJP) held a rally in support of the Citizenship Amendment Act at exactly the same venue where the Dravida Munnetra Kazhagam (DMK) had staged a massive protest march along with its allies in December last year against the same law.

However, for the BJP, the rally didn’t turn out to be the way it would have wanted with two of its key allies, namely the ruling All India Anna Dravida Munnetra Kazhagam (AIADMK) and Paattali Makkal Katchi (PMK), staying away from the event.

Though party functionaries said the event was a solely BJP-organised one, a hoarding put up on the dias stated the event is being held by the BJP and its alliance partners. 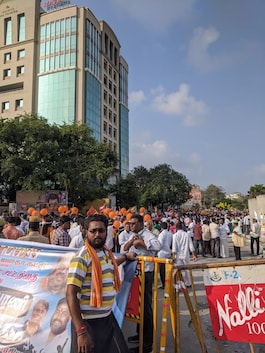 (At Tuesday's BJP rally in favour of the CAA in Chennai)

"This is a BJP rally organised to convey to the public that the amended Citizenship Act will not have any bearings on the minorities. Therefore, the AIADMK is not a part of it,” said Narayanan Tirupathi, state BJP spokesperson.

However, a top BJP source said the party leadership had continued to urge members of the Edappadi Palanisamy government and PMK MP Anbumani Ramadoss to attend the rally till late last night, but with no luck. Hence, they were forced to call it a BJP rally. However, two fringe outfits took part in the event.

Meanwhile, the ruling AIADMK is facing the heat from several corners for its support to the controversial Act that seeks to give citizenship on the basis of religion.

On Tuesday, when DMK MLAs hit out at the government over the issue at the Assembly, state minister RB Udaykumar said, “No Muslim in India will get affected because of CAA and there is no order for implementing the National Register of Citizens (NRC) in any state other than Assam. Even if there is an order to implement it and even if one Muslim gets affected because of it, AIADMK will raise its voice against it.”

Even the PMK, in its general council meet held on December 30, passed a resolution opposing the NRC, adding that it would 'create unwanted fear' among minorities.