PM Narendra Modi during his address to the nation on Tuesday. (PTI)

As the festival season sets in and the West Bengal assembly elections just a few months away - the race to gain political mileage in the state gains momentum with the Trinamool Congress (TMC) and Bharatiya Janata Party (BJP) working hard to outdo each other.

Dressed in traditional Bengali attire, Prime Minister Narendra Modi on Thursday became the premier since Independence to deliver a part of his virtual speech in 'Bangla' addressing the people of West Bengal on the occasion of Durga Puja.

This is also the first time - under the banner of 'Bengal BJP Parivar' - that workers, leaders and MPs dressed in 'dhuti-panjabi' and 'sarees' had organised Durga Puja pandals across the state.

While the main Puja event for senior state BJP party leaders was held at Eastern Zonal Cultural Centre (EZCC) in Kolkata's Salt Lake area, all pandals across the state organised by the Bengal BJP Parivar were connected with PM Modi's speech. 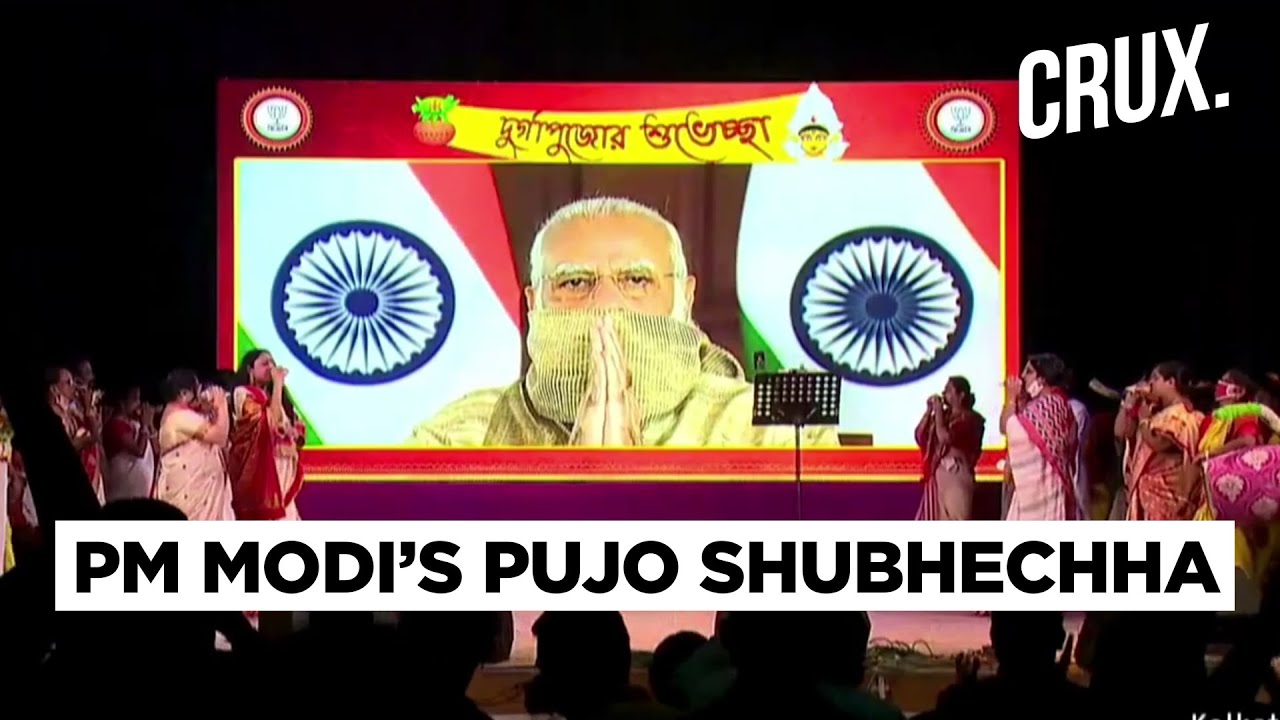 He said, “The power of maa Durga and devotion of the people of Bengal is making me feel like I am present in the auspicious land of Bengal. We're all celebrating Durga Puja this year amidst the COVID pandemic. Everyone has shown immense control and commitment to the entire arrangements while also ensuring that the flavour remains the same.”

The Prime Minister paid tribute to iconic figures of the state saying, “The people of Bengal have always been intellectual and made the country proud and I have the utmost faith that they will continue to lead India to a brighter future. On this auspicious day of Mahashashthi, I pay my respects to this pious land of Bengal. I also pay my respects to Lokenath Baba, Rabindranath Thakur, Ishwar Chandra Vidyasagar, Netaji Subhas Chandra Bose, Rani Rashmoni and many other Bengalis who make us proud."

He also spoke about how the Swadeshi movement gained moment in the state and led to the slogan of "Aatmanirbhar Jeevan". “It was Bengal, from where the Swadeshi Movement gathered steam before India’s Independence. It was Bengal, from where Gurudeb Rabindranath Tagore and Bamkin Chandra Chattopadhyay gave the slogan of ‘Aatmanirbhar Kisan’ and ‘Aatmanirbhar Jeevan’. Therefore, I believe that in this 21st century – the pledge for ‘Aatmanirbhar Bharat’ will get its strength from Bengal itself. I pray that every year we celebrate Durga Puja in this manner with joy and happiness among people. The sweetness in the Bengali language is such that I couldn’t resist myself from speaking this beautiful language among the people of Bengal. I thank the pious land and the people of Bengal and May Maa Durga bring joy and happiness to everyone,” he said.

While wishing the people PM Modi also highlighted the various schemes of the government, “We are continuously working for the fast development of the state of West Bengal. Under Pradhan Mantri Awas Yojana, houses have been constructed for around 30 lakh poor people. More than 90 lakh free gas connections were given under Pradhan Mantri Ujjwala Yojana and four crore bank account of women were opened under Jan Dhan Yojna in Bengal and we have connected four lakh houses with clean piped water under Jal Jeevan Mission in this state.”

Though Modi finished his speech in nearly 23 minutes, his speech has left an indelible mark in Bengal’s politics as no other Prime Minister has done this before.

Commenting on PM Modi’s speech, TMC MP Saugata Roy said, “There is a general feeling that BJP is anti-Bengali and therefore to project themselves as the ‘Bangaliana’ face of Bengal, they put forward Narendra Modi. You can imagine the level of desperation to win Bengal polls - that the party was forced to put forward the Prime Minister itself to deliver part of his speech in Bengali. They have realised that peace-loving people in Bengal do not like their way of divisive politics and therefore they have chosen Durga Puja to play politics.”

Calling the speech on schemes 'recycled' and a publicity stunt, Roy said, “The second part of his speech about various schemes was recycled and a publicity stunt ahead of the polls. Nowadays people don’t like it if some beat his or her own drum. He did nothing for Bengal and now they became restless to capture Bengal,” he added.

As the festival season sets in and the West Bengal assembly elections just a few months away - the race to gain political mileage in the state gains momentum with the Trinamool Congress (TMC) and Bharatiya Janata Party (BJP) working hard to outdo each other.

Be it Eid, Rakshabandhan, Ganesh Chaturthi or Durga Puja — leaders of both the parties are silently trying to gain control of the puja committees/organisers as these religious platforms work best as turf wars ahead of the state and municipal elections.

Senior CPI (M) leader Amiya Patra said, “It is unfortunate that in the name of goddess Durga, Narendra Modi played politics today. Since 2014, (when BJP came to power) this is the seventh Durga Puja we are celebrating. But he never addressed the people the way he did today. Even in other big festivals, he was never seen addressing a particular community and a particular state through such big virtual arrangements.”

He further pointed, “Suddenly, what happened to him? What happened to BJP? Why are they so keen on utilising Durga Puja as a platform to woo the people in Bengal? People in Bengal are not fools as they know that this is nothing but BJP’s well thought political strategy considering the upcoming poll in the state.”

In 2014, when the BJP came to power at the Centre - party’s leadership aimed at filling up the opposition vacuum in Bengal and improving its nascent presence. Over the last few years, religious events like Ram Navami, Hanuman Jayanti, Janmashtami and Ganesh Chaturthi have become popular in the state that prides itself in its Durga Puja festivities.

Political expert Kapil Thakur, said, “As the presence of Mamata Banerjee-led TMC is more prominent with the Durga Puja committees considering the popularity of the festival in Bengal, the BJP decided to play it big this time by projecting Modi.”

Thakur feels that PM Modi’s virtual speech has its direct link with the upcoming 2021 Assembly polls as the saffron brigade is desperate to take control of the power of the corridors in Bengal.

“Struggling with Hindi tag, the BJP is trying to tap the emotion of Bengali people through Durga Puja. Nothing could be better to appease Bengali than the Durga Puja festivals. They are trying to project themselves as the bangaliyana face of Bengal. Durga Puja has its own emotions when it comes to Bengalis and therefore BJP has put forward its biggest leader Modi (at present) to wish people in Bengal. This shows how desperate they are to win the state elections,” Thakur said.

A look back on June 14, 2019 (a few days after the Lok Sabha poll results which saw the BJP’s deep inroads in Bengal by winning 18 seats), Mamata Banerjee for the first time played the Bengali card ‘prominently’ after her party suffered a setback.

Mamata had then said, those living in the state will have to learn to speak Bengali and will not "tolerate humiliation from outsiders." “Bengal will not tolerate conspiracy, humiliation and insult from outsiders. Bengal will show the path in future. When I go to Bihar, UP, Punjab, I speak in their language. There is nothing wrong with speaking in their language. If someone is living in Bengal, he/she should learn Bengali,” Mamata had told TMC workers at Kanchrapara in North 24 Parganas district (the place which is known as a strong bastion of BJP leader Arjun Singh and Mukul Roy after the MPs switched camp from the TMC).

This year too during ‘Shahid Diwas’ virtual rally, she intensified her attack on BJP and termed them as ‘outsiders’.

While hinting at Narendra Modi and Amit Shah, the TMC supremo had said, “We will not allow Gujarat to run Bengal. Bengal can take care of itself. We don’t need BJP outsiders to take care of Bengal. Those (BJP) who are insulting Bengal, will have to pay a heavy price for it. A handful of faceless people who don’t have any ideology are trying to terrorise the people across the country because they are in power at the Centre. They are trying to gag our voice through terror.”

This consistent effort by Mamata to keep her party’s ‘Bangaliana’ strategy against ‘outsider BJP’ didn’t go unnoticed among the political experts including Thakur and those in the BJP camp. The experts viewed the strategy as Mamata's efforts to open a new front (apart from non-Bengali Hindu and Muslim vote share) to polarize Bengali vote to some extent and derail BJP’s game plan ahead of upcoming polls in 2021.

Congress Rajya Sabha MP Pradip Bhattacharya attacked PM Modi for using Durga Puja as a platform to play their dirty politics. He said, “He did the same thing during the deputy chairman election of the Rajya Sabha. He made Harivansh Narayan Singh the deputy chairman considering the elections in Bihar. He keeps on doing such appeasement politics. Now when we have polls in Bengal, he decided to play the same trick through his virtual speech in Bangla.”

“People of Bengal have realised BJP's dirty politics which is based on religious lines and to suppress that - they want to play with the emotion of Bengalis through such virtual addresses. I found it very cheap on behalf of the BJP. They can go to any level to grab power. People in Bengal will not take his speech in good note because it came with an intention and not actual love,” he added.