Assembly Elections 2019 LIVE Updates: Prime Minister Narendra Modi today said Jammu and Kashmir were not mere pieces of land for his government but India’s crown and dared the opposition Congress to reverse the decision to scrap Article 370, which granted special status to the state. It’s a battle between PM Modi and Congress leader Rahul Gandhi as the star campaigners of the BJP and Congress will kick off campaigning in Maharashtra ahead of the October 21 elections in the state. While PM Modi will address two rallies in Jalgaon and Bhandara, Gandhi is set for three rallies — one in Latur and two in Mumbai.

The BJP, in alliance with Shiv Sena in the state, is confident of trumping the grand old party, which has been plagued by infighting and fractures due to conflict between Sonia Gandhi’s loyalists and Rahul Gandhi’s young turks.

Prime Minister Narendra Modi saysm, "Earlier, the affairs of water were looked after by different ministries and departments, all were scattered. One effect of this was that the water-related schemes used to take years to complete. Now all these departments have been brought under the Ministry of Water Power."

"Today, every policy, every strategy, is for the welfare of the nation from public welfare, nation-building through public campaign. Whether the poor's home and toilets are built, every household has an electricity connection, the poor get free treatment. Poor and common people are at the center of all these schemes," says PM Modi during his election rally.

"Today, every policy, every strategy, is for the welfare of the nation from public welfare, nation-building through public campaign. Whether the poor's home and toilets are built, every household has an electricity connection, the poor get free treatment. Poor and common people are at the center of all these schemes," says PM Modi during his election rally.

"Maharashtra has got a strong and young leadership in the form of Devendra Fadnavis.​ Fadnavis ji has led the entire Maharashtra, every citizen of Maharashtra with integrity and wholeness, worked for social harmony," says PM Modi at a campaign rally in Sakoli.

Defence Minister Rajnath Singh "politely" asks Pakistan's to change the way it thinks otherwise it would be divided into several pieces.

Defence Min Rajnath Singh in Haryana's Pataudi: Today with utter politeness, I want to give suggestion to Pakistan that they must change the way they think & the direction of their thinking, else Pak that was divided into two parts earlier, will now be divided into several parts. pic.twitter.com/BgZLznY8Ju Shiv Sena party chief Uddhav Thackeray at the Parbhani Assembly Constituency while at a campaign rally organized by Shiv Sena-BJP.

Here is a visual from the launch event of BJP's Haryana Election manifesto. 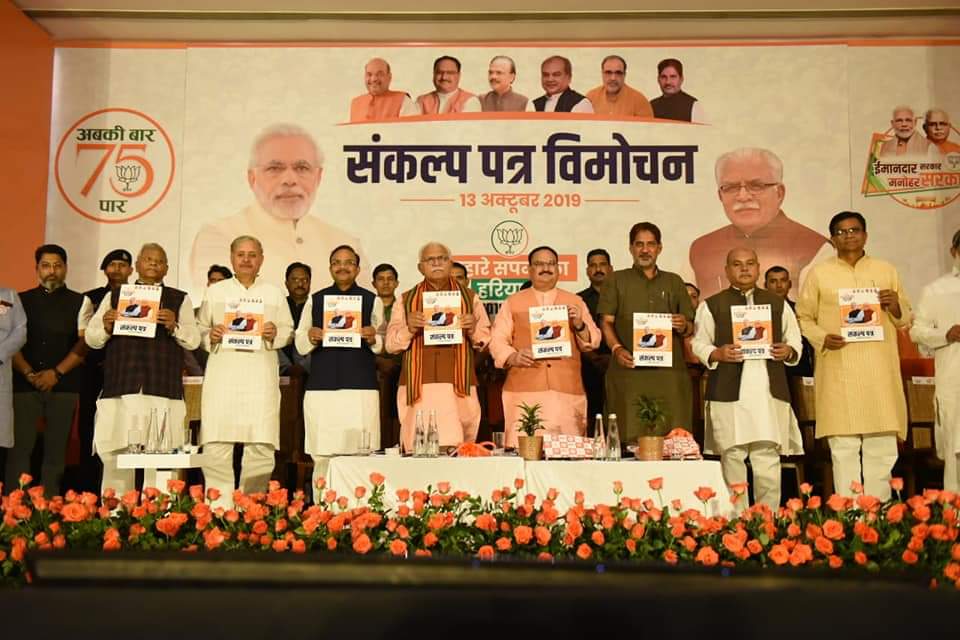 The BJP's Haryana manifesto calls for a risk free farming policy for the welfare of farmers.

In Maharashtra, loans worth nearly Rs 52 thousand crore were given to 4 lakh people under Mudra Yojana, 2.50 accounts were opened under Jan Dhan Yojana, electricity was provided in the houses of 15 lakh poor and 40 lakh poor women were given gas cylinders under Devendra Fadnavis' tenure, says Amit Shah in Kolhapur. "Rs 1.15 lakh crore were given to the state of Maharashtra by the Centre during the NCP-Congress Govt. Under PM Modi's regime, the state has been provided Rs 2,86,354 crore in the last five years," he added.

In the last five years, the Devendra Fadnavis government has brought Maharashtra to No. 1 in Foreign Direct Investment (FDI), No. 3 in education and among the top five states in farming and industry, says Amit Shah during Kolhapur campaign.

Union Home Minister Amit Shah in Kolhapur, Maharashtra: This is the first election to be held after the abrogation of Article 370.When Congress & Nationalist Congress Party (NCP) leaders come here for campaign, do ask them about their stand on Article 370. pic.twitter.com/pJJWm3J52J

Amit Shah, campaigning for the Maharashtra Assemble elections in Kolhapur says, "When the Congress and NCP Govts were in power here, an irrigation scheme worth Rs 70,000 crore was announced. Not a single farmer received water, and all the money was looted by the corrupt leaders."

Amit Shah Speaks at Rally in Kolhapur | "The people of India & Maharashtra gave more than 300 seats to PM Modi, and in the first session of the Parliament, he abrogated Article 370 from J&K on August 5 and mainstreamed Kashmir within the Indian Union," says Union Home Minister Amit Shah at an election rally in Maharashtra's Kolhapur.

PM Modi says that farmers are being pushed to become exporters, too. "Now we are seriously trying to turn farmers into exporters as well. Food processing industries will play an important role in this. The economic situation of this entire region is going to change rapidly," he said.

"We are working with full capacity to fulfill the dreams of every poor person in Maharashtra and the country by 2022," says PM Narendra Modi. He further pledges to connect every house in the entire country including Maharashtra with water. "Three and a half lakh crore rupees will be spent on the Water Life Mission to fulfill this resolution," he adds.

PM Modi takes a jibe at NCP chief Sharad Pawar saying,"I was shocked to see a video in which a prominent leader who has been on TV and newspapers for years got angry and hit a man with his elbow who was sitting next to him stage and while he was being garlanded he tried to put his head in the garland. Just think that the people who hits his own party member for trying to take a photo just think what will he do with general public."

"When we hear about the change in the lives of the poor women here, we are satisfied. Today about 10 lakh sisters of Maharashtra are taking care of their family in their pucca house due to our government housing scheme," says PM Modi at the Jalgaon rally.

Taking a swipe at the Congress-NCP alliance, Narendra Modi says, "Tired allies can be a support for each other, but cannot be a means to fulfill the dreams of Maharashtra and the aspirations of the youth here."

PM Narendra Modi says at his Jalgaon rally, "Opposition here is shocked and disturbed by our work of last 5 years. Our opponents today also believe that the leadership of the BJP-Shiv Sena alliance is both working and energetic."

"Today I challenge the opponents that if you have the courage, then in your election manifesto, in this election and also in the upcoming elections, declare that we will bring Article 370 back. We will change the decision of 5 August," says Prime Minister Narendra Modi.

PM Modi Challenges Opposition | "From the land of Chhatrapati Shivaji, I challenge the opposition to make their stand clear and announce if they support the decision taken by the government to remove Article 35 A and Article 370.

"We are constantly working to return Jammu and Kashmir to a full state of normalcy and it will not take us more than 4 months to make it possible," says Narendra Modi. He adds that political parties and their leaders are speaking the same language as our neighboring country. "There seems to be great co ordination between them," he says.

Prime Minister Narendra Modi says, "Today, New India is determined not to be bound by unnecessary bonds of the past. Today, the new India is strengthening its own present, is also deciding its own future. For some time now we have been constantly challenging the challenges."

The fissures in the party have been deepening with several of its leaders, including Nirupam and Ashok Tanwar, raising issues with the distribution of tickets for the Maharashtra and Haryana polls respectively.

"Congress' hierarchy structure is extremely faulty and will cause the party more problems in the future," Nirupam pointed out and added, "On October 24 we will lose our deposit. That will be our fate after elections."

A miffed Nirupam, who had announced that he would not campaign for the party in the Assembly polls scheduled for October 21, said the leadership was "sidelining" him though he had served as Mumbai unit president for four years.

Nirupam, who was removed as Mumbai Congress president ahead of the Lok Sabha polls, said his views had not been considered during ticket distribution for the Assembly polls.

It’s not all smooth sailing for the BJP too. Keeping up with its blow hot, blow cold relationship with the Sena in the state, the two parties will be facing each other in the Kankavli seat. Though the allies had finalised a seat-sharing pact for the polls, the Sena was upset with the BJP fielding Nitesh Rane, son of former Maharashtra chief minister Narayan Rane, from the seat and hence decided to put up its own candidate.

In other election-related news, Union Home Minister and BJP chief Amit Shah will also campaign in Maharashtra. He will hold rallies in Kolhapur, Satara, Pune and Aurangabad.

Earlier, Union Defence Minister Rajnath Singh said if India had the Rafale aircraft during the Balakot strike, it would not have to cross the border and would have eliminated terror camps from within India. Addressing a rally in Karnal, Singh also slammed the Congress for mocking the 'Shastra Puja' he conducted when he went to France to receive the first Rafale aircraft, saying such statements "only strengthen Pakistan".