»»»Bikram Majithia to Contest Against Sidhu in Amritsar East

Bikram Majithia to Contest Against Sidhu in Amritsar East

The Congress party has so far announced 109 candidates of the total 117 assembly seats in Punjab.

Samajwadi Party leader Mohammad Azam Khan on Wednesday filed his nomination for Rampur Sadar seat from inside Sitapur jail. The Returning Officer from Rampur visited the jail to get his nomination papers after an order was issued by Additional Chief Judicial Magistrate Rampur Court, Jailor RS Yadav told media.

Ahead of the Uttar Pradesh elections, senior Bharatiya Janata Party (BJP) leader and Union home minister Amit Shah on Wednesday exhorted Jat community leaders to support the saffron party as the two were engaged in fighting the same enemy, the Mughals. READ MORE

Bikram Singh Majithia, a former minister, is the brother-in-law of Sukhbir Badal. Taking to Twitter, Majithia expressed gratitude to Akali Dal chief Sukhbir Badal. Tagging Sidhu, he added that “Akalis have a brave history of fighting to safeguard the rights of Punjabis and protecting them from the anti-Punjab elements like @sherryontopp.” READ MORE

The ECI decision to defer the polling date in Punjab by six days to facilitate the celebration of Guru Ravidas Jayanti by his devotees on February 16 shows how crucial are Dalit votes for various political parties in the state. Punjab was originally scheduled to go to polls on February 14, but the poll panel, on representation from various political parties, deferred the voting day to February 20 to ensure that Guru Ravidas’ devotees do not miss voting due to their largescale travel from Punjab to Varanasi and back to celebrate the seer’s birth anniversary.

"Our door is always open for him": BJP MP Parvesh Verma after a meeting of HM Amit Shah with Jat leaders from UP

#WATCH | “We wanted to welcome (RLD chief) Jayant Chaudhary in our home (BJP) but he has chosen the wrong path. People of Jat community will speak to him. Our door is always open for him,” says BJP MP Parvesh Verma after a meeting of HM Amit Shah with Jat leaders from UP pic.twitter.com/2g57XfVMVt 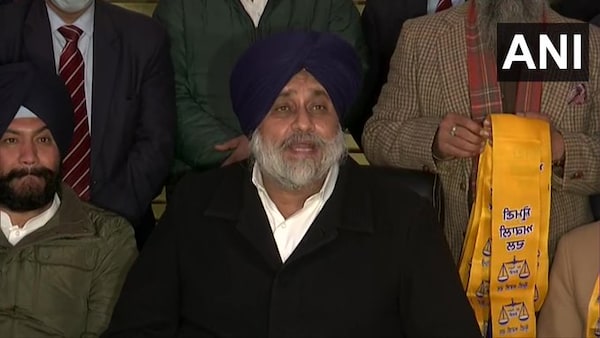 Bharat Ratna, Reservation for Jats Among Other Demands Raised by Jat Leaders from UP in Meeting With Amit Shah

“We have demanded Bharat Ratna for (former PM) Chaudhary Charan Singh, reservation for Jats & proportionate representation in Central &UP Govts. The HM has responded positively,” an attendee says pic.twitter.com/H1KnjZHqcE

The BJP on Wednesday announced its second and final list of six candidates for the February 14 Goa Assembly elections. It included Assembly Speaker Rajesh Patnekar who would contest from his current constituency of Bicholim. But Siddhesh Naik, the son of Union minister Shripad Naik who was reportedly seeking ticket from Cumbharjua, did not find place in the list. Jainita, former state minister and sitting MLA Pandurang Madkaikar’s wife, would contest on BJP ticket from the constituency.

READ: With Muslim candidates cornering a significant share of seats in the Samajwadi Party-Rashtriya Lok Dal alliance, the BJP is reaching out to Jat voters by saying the SP has cheated their community in western Uttar Pradesh.

Uttarakhand Congress working president Ranjit Rawat has expressed displeasure of the candidature of former CM Harish Rawat from Nainital’s Ramnagar, a seat from where he was hopeful of getting the party ticket. In a purported video that surfaced on social media, Ranjit Rawat is seen questioning the party’s move while demanding that Harish Rawat’s candidature be withdrawn. “Will you let someone else (Harish Rawat) reap the harvest of a barren land which you made fertile,” he is seen asking party workers in the video.

With the Samajwadi Party nominating old hand Pawan Pandey on the Ayodhya seat, all eyes are on the BJP which is yet to name its candidate for the high-profile constituency after buzz on Chief Minister Yogi Adityanath stopped with the party fielding him from the Gorakhpur Urban seat. The BSP and Congress are also yet to come out with the names of their candidates but people here see the poll as a direct fight between the SP and the BJP.

It took Roopali Dixit just three minutes to convince the Samajwadi Party chief to give her the ticket to fight the assembly elections from Fatehabad. Or so she says. Her pitch to the SP included the mention of the grudge she held against the BJP candidate over a video clip in which he allegedly insulted her father — who is in jail for murder and the Thakur community. READ MORE

Congress candidate from Budaun Sadar Rajni Singh Baaghi on Wednesday carried with her an idol of Laddu Gopal’ as she filed her nomination papers for the upcoming Assembly polls. He is my ‘saarthi’ (charioteer) and he will ensure my victory, the 33-year-old candidate said. Impressed by Priyanka Gandhi Vadra’s ‘Ladki Hoon Lad Sakti Hoon’ campaign, Singh paid a visit to the Congress general secretary and was soon confirmed as the party candidate from Budaun Sadar.

READ | Ahead of Rahul Gandhi's Punjab Visit, Local Leaders Hope for Redux of a 2017 Moment & Clarity on CM Face

Congress leaders have publicly maintained that the party will go into the Punjab polls with a “collective” leadership but Thursday’s visit by Rahul Gandhi has had “anxious” state leaders hoping that he could provide some clarity on who leads them into the hustings. READ MORE

Punjab polls | If we form govt, will give free hand to Punjab Police…will form a drug task force for a (drug) addiction-free Punjab which will have no political interference: Bhagwant Mann, AAP CM candidate for Punjab pic.twitter.com/pY3D0VpJwy

RECAP | In This UP Polls, Gorakhpur Gets Chance to Send a CM to State Assembly

Yogi Adityanath’s entry into the Uttar Pradesh poll scene from Gorakhpur Urban has created a big buzz among the constituency’s electorate which now has a chance of sending a chief minister to the state assembly. The BJP’s decision to field Adityanath from this assembly segment has also attracted Azad Samaj Party supremo and Bhim Army founder Chandrasekhar Azad alias ”Ravana” and Dr Kafeel Khan, whose name surfaced in the 2017 BRD Medical college tragedy, to contest from the seat. READ MORE

Goa TMC General Secretary Adv Yatish Naik resigns from the party “Seeing the manner in which the Party is functioning, I find no good reason to continue being a member of the party. I feel humiliated, tired & dejected for having been made to go through all this,” his letter reads.

RECAP | I'm Very Much a BJP Worker, Says Party MP and Daughter of UP Minister Who Joined SP

Budaun’s BJP MP Sanghamitra Maurya, whose father and UP minister Swami Prasad Maurya recently defected to Samajwadi Party, on Tuesday asserted that she was a very much BJP worker, expressing her loyalty to Prime Minister Narendra Modi. Reaching here for the first time after her father quit the BJP, she took part in the filing of nomination papers by her partymen for the assembly polls. READ MORE

READ | Ahead of Rahul Gandhi's Punjab Visit, Local Leaders Hope for Redux of a 2017 Moment & Clarity on CM Face

Opposition BJP on Tuesday slammed the West Bengal government’s decision to launch the neighbourhood learning center project claiming that it will compromise the security of the students and the teachers alike. Party state spokesman Samik Bhattacharya told the media that the state government instead of ensuring that classes resume immediately in the educational institutions, is resorting to gimmicks like launching the neighbourhood learning project which will not benefit the vast majority of primary and pre-primary students.

The Congress on Tuesday targeted the BJP over a purported video clip of Union minister Sanjeev Baliyan making derogatory remarks against Brahmins. Congress spokesperson Supriya Shrinate alleged that the remarks made in the clip, which has gone viral, show the anti-Brahmin, anti-Dalit mindset of the BJP. She also alleged that BJP leaders have made such casteist remarks against Dalits and Other Backward Classes (OBCs) in the past. “The Uttar Pradesh government, the central government and the BJP leadership should apologise for the shameful remarks made by the union minister,” she said.

The BJP on Tuesday declared names of eight more candidates including two women — Gudiya Katheriya from Auraiya and Poonam Sankhwar from Rasulabad in Kanpur Dehat. The party declared Sanjeev Kumar Diwakar from Jalesar constituency and Veerendra Verma from Marhara seat in Etah district. It has named Mamtesh Shakya from Patiyali and Hari Om Verma from Amanpur (both in Kasganj district). The party has decided to field Priyaranjan Ashu Diwakar from Kishani seat in Mainpuri district.