Samajwadi Party chief Akhilesh Yadav embarked on his ‘Samajwadi Vijay Yatra’ in Varanasi tonight, after Prime Minister Narendra Modi ended his mega road show in his parliamentary constituency earlier in the evening. While pictures of PM Modi sipping on steaming tea at a roadside stall went viral, Yadav said the historic night at Kashi would give birth to a “new dawn of political consciousness”. He tweeted in Hindi: “This historic journey of the night of Kashi… will lead to a new ‘Subah-e-Banaras’ of political consciousness…” 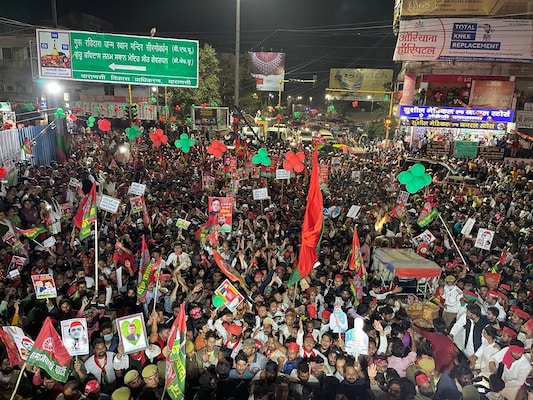 Prime Minister Narendra Modi enjoyed a cup of steaming tea at a roadside stall in his parliamentary constituency of Varanasi. He ended his mega road show at Banaras Hindu University, where he garlanded the statue of Pandit Madan Mohan Malviya. The PM was campaigning for the seventh and final phase of the Uttar Pradesh assembly elections on March 7. (Prime Minister Narendra Modi has a cup of tea at a roadside stall in Varanasi. Image: News18)

Senior Congress leader Rahul Gandhi today accused Prime Minister Narendra Modi of seeking votes on the basis of “lies”, and said he now does not talk about his poll promises of doubling farmers’ income and generating jobs. “Hindu religious books nowhere say to speak lies,” Gandhi told an election rally in Varanasi after offering prayers at Kashi Vishwanath temple, during which he was also joined by his sister Priyanka Gandhi Vadra. Rahul alleged that Modi now doesn’t speak on his earlier poll promises of doubling farmers’ income and generating jobs for youths, whereas there is “no mismatch” in the words and deeds of the Congress. He cited the example of fulfilling poll promises of writing off farmers’ loans by the Congress government in Chhattisgarh and also procurement of paddy at minimum support price of Rs 2,500 per quintal. PTI

#WATCH | PM Modi tries his hand at 'damru' at Kashi Vishwanath Temple in Varanasi, post his roadshow ahead of the last phase of #UttarPradeshElections2022 pic.twitter.com/N7HaEtlETx

After drawing a massive crowd during the road show at his parliamentary constituency of Varanasi, Prime Minister Narendra Modi offered prayers at Kashi Vishwanath Temple today. Political heavyweights are all campaigning hard for the seventh and final phase of the Uttar Pradesh assembly elections on March 7.

PM Narendra Modi offers prayers at Kashi Vishwanath Temple in Varanasi, post his roadshow ahead of the 7th phase of #UttarPradeshElections2022 pic.twitter.com/2az7Ypn3u7

As the seven-phase Uttar Pradesh elections enters its final leg, the 54 remaining assembly constituencies across nine districts of Varanasi, Mirzapur and Azamgarh divisions are likely to face a fierce contest between the ruling Bharatiya Janata Party (BJP) and its arch rival Samajwadi Party (SP). While the BJP hopes to continue its dominance, the SP aspires to not only defend its stronghold of Azamgarh, but also expand its influence across the region. For both the BJP and the SP, a lot will however depend upon how their allies perform in this phase and the larger mood of the most backward communities. The constituencies that go to polls are Atraulia, Gopalpur, Sagadi, Mubarakpur, Azamgarh, Nizamabad, Phulpur-Powai, Deedarganj, Lalganj (SC), Mehnagar (SC), Madhuban, Ghosi, Muhammadabad-Gohna (SC),Mau, Badlapur, Shahganj, Ghazipur, Jangipur, Zahurabad, Mohammedabad, Zamania, Mughalsarai, Sakaldiha, Saidaraja, Chakia (SC), Pindra, Ajgara (SC), Shivpur, Rohaniya, Varanasi North, Varanasi South, Varanasi Cantonment, Sevapuri, Bhadohi, Gyanpur, Aurai (SC), Chanbe (SC), Mirzapur, Majhawan, Chunar, Madihan, Ghorawal, Robertsganj, Obra (ST) and Duddhi (ST). Of these, 11 seats are reserved for scheduled castes and 2 for scheduled tribes. READ MORE

At a political rally in Jaunpur today, Uttar Pradesh chief minister Yogi Adityanath said elecricity was also politicised before 2017, indicating a time before the BJP-led government came to power in the state. “Earlier electricity was also politicised. Before 2017, did you get electricity? Now, it’s available, and there are no cuts. Earlier, it would not come, and now it doesn’t go because we believe in ‘Sabka saath, sabka vikas’,” Adityanath said. ANI

People turned out in huge numbers at Prime Minister Narendra Modi’s roadshow in his parliamentary constituency of Varanasi, ahead of the seventh and final phase of the Uttar Pradesh assembly elections. ANI (Prime Minister Narendra Modi during a road show in his parliamentary constituency of Varanasi. Image: News18)

Prime Minister Narendra Modi offered garland to the statue of Sardar Patel at Maldahiya Chowk in Varanasi, as he begins his roadshow#UPElections2022 pic.twitter.com/oPMym4TfRG

Everyone Can See What's Happening in Ukraine, We are Trying to Get Students Safely Back, Says PM

Addressing a public rally in Varanasi, Prime Minister Narendra Modi said, “Everyone is seeing what is happening in Ukraine. The Indian government is trying its best to get all the students back safely to India.” UP Polls: Modi to Hold Roadshow in Varanasi

As the fiercely fought poll battle reaches the prime minister’s constituency, competing parties have been putting in their best to win over the assembly seats here and a perception war before the 2024 general elections. City BJP president Vidyasagar Rai told .

Battle for UP: Mamata Accuses BJP of Attacking Her in Varanasi

West Bengal Chief Minister and Trinamool Congress chief, Mamata Banerjee, on Thursday accused the BJP workers in Uttar Pradesh of attacking her car with sticks while she was going to take part in a Ganga aarti in Varanasi.

“Yesterday when I was going to Ghat from airport, I saw some BJP workers – who have nothing else except hooliganism in their brains – stopping my vehicle. They hit my car with sticks and told me to go back. Then I realised that they’re gone,” she declared.

Prime Minister Narendra Modi Thursday said the BJP’s victory in Uttar Pradesh assembly polls is necessary to ensure that the state’s journey on the path of development does not stop. Taking a jibe at the opposition, he said that dynasts who only try to fill their ‘tijori’ (vault) can never fulfill the dreams of the poor. Addressing an election meeting in Jaunpur, he claimed that voting in the state so far has confirmed the victory of the BJP alliance.

Battle for UP: 28% Criminal Candidates in Polls' Final Phase

The seventh and final phase of Assembly elections in Uttar Pradesh has 28 per cent criminal candidates. According to an analysis report released by the Association for Democratic Reforms (ADR), out of 607 candidates in the final phase, 170 candidates have declared criminal cases against themselves in their affidavits.

Of these, 131 candidates have serious criminal cases against them.

The Samajwadi Party is again leading the list of criminal candidates with 26 out of 45 candidates having a criminal background. The BJP has 26 such candidates out of a total of 47 and the BSP has 20 out of 52.

A turnout of 53.90 per cent was registered in the sixth and second-last phase of the Uttar Pradesh Assembly polls on Thursday, involving 57 constituencies in 10 districts, the Election Commission said in its latest update. It also said that the voter turnout figure was approximate trend as the data from some polling stations takes time to reach it.

RECAP | If Akhilesh's Alliance Wins UP, Modi Govt Can Be Toppled in 2024: Mamata

Campaigning for the Samajwadi Party in Uttar Pradesh assembly polls, West Bengal Chief Minister Mamata Banerjee on Thursday said if Akhilesh Yadav’s alliance wins the state elections, then the Narendra Modi government can also be toppled in 2024. The Trinamool Congress supremo, who described herself as a “fighter”, also alleged she was attacked by BJP workers on Wednesday after she arrived for campaigning in Varanasi, PM Modi’s parliamentary constituency, in support of the SP.

“I was coming from the airport yesterday and going to the (Dashashwamedh) ghat. Midway, some BJP workers, who have nothing in their brain except violence, stopped my vehicle. They hit my car, pushed me and told me to go back,” Banerjee claimed. “It was then that I thought, they are going out (of power). They are completely gone, their defeat is imminent,” the Trinamool Congress (TMC) chief said.

Everyone Can See What's Happening in Ukraine, We are Trying to Get Students Safely Back, Says PM

Battle for UP: Mamata Accuses BJP of Attacking Her in Varanasi

Battle for UP: 28% Criminal Candidates in Polls' Final Phase

On Friday, PM Modi will take out his mega roadshow in Varanasi, while Rahul Gandhi will go for Kashi Darshan and then address a public meeting in Pindra. Meanwhile, Akhilesh Yadav’s roadshow is scheduled in the evening on the same route.

Prime Minister Narendra Modi Thursday alleged the Opposition is trying to divide society for votes at a time when India needs to be strong to deal with “serious challenges” the world faces. The possible reference to the war in Ukraine came during a poll meeting during which Modi also said the BJP’s victory in the ongoing Uttar Pradesh election is necessary to ensure the state’s journey on the path of development does not stop.

“The time is coming up with serious challenges for the whole world. So your vote is making India strong to deal with these challenges. On one hand, there are those who are busy dividing society for votes even at such times, while on the other side there are BJP and our allies who are devoting themselves wholeheartedly in the development of the country,” he said.

Taking a jibe at the opposition, he said that dynasts who only try to fill their ‘tijori’ (vault) can never fulfill the dreams of the poor. He claimed that voting in the state so far has confirmed the victory of the BJP alliance.