BJP Working President JP Nadda and Union Minister Kiren Rijiju pose for a photograph with the wrestler Babita Phogat and her father Mahavir Singh Phogat after they joined the Bharatiya Janata Party at BJP headquarters, in New Delhi. (Image: PTI)

BJP national general secretary Arun Singh said the party's central election committee has repeated 38 MLAs and dropped seven of them for the polls to the 90-member assembly.

While Dutt will contest from Baroda, Phogat will fight polls from Dadri and Singh from Pehowa. In the same list, Haryana chief minister Manohar Lal Khattar has been picked to fight elections from Karnal once again. Khattar had won from Karnal seat in 2014.

Haryana BJP president Subhash Barala will contest from Tohana, Captain Abhimanyu from Narnod and Om Prakash Dhankar from Badli, Singh said. Former Union minister and Jat leader Birender Singh's MLA wife will contest from Uchana Kalan, a seat she had won in 2014. The candidates include nine women and two Muslims.

BJP national general secretary Arun Singh said the party's central election committee has repeated 38 MLAs and dropped seven of them for the polls to the 90-member assembly.

The announcement comes a day after BJP held the Central Election Committee meeting to finalise its candidates for the assembly elections in Haryana and Maharashtra.

The party's top brass, including Prime Minister Narendra Modi, its chief Amit Shah and working president J P Nadda, deliberated for several hours with other CEC members and leaders from the two states to finalise names of candidates.

Manohar Lal Khattar and Devendra Fadnavis, the chief ministers of Haryana and Maharashtra respectively, remain the face of the BJP in the polls with the party confident of retaining power riding on the back of Modi's popularity, "public support" to the Centre's decision to abrogate special status to Jammu and Kashmir and the achievements of its state governments. 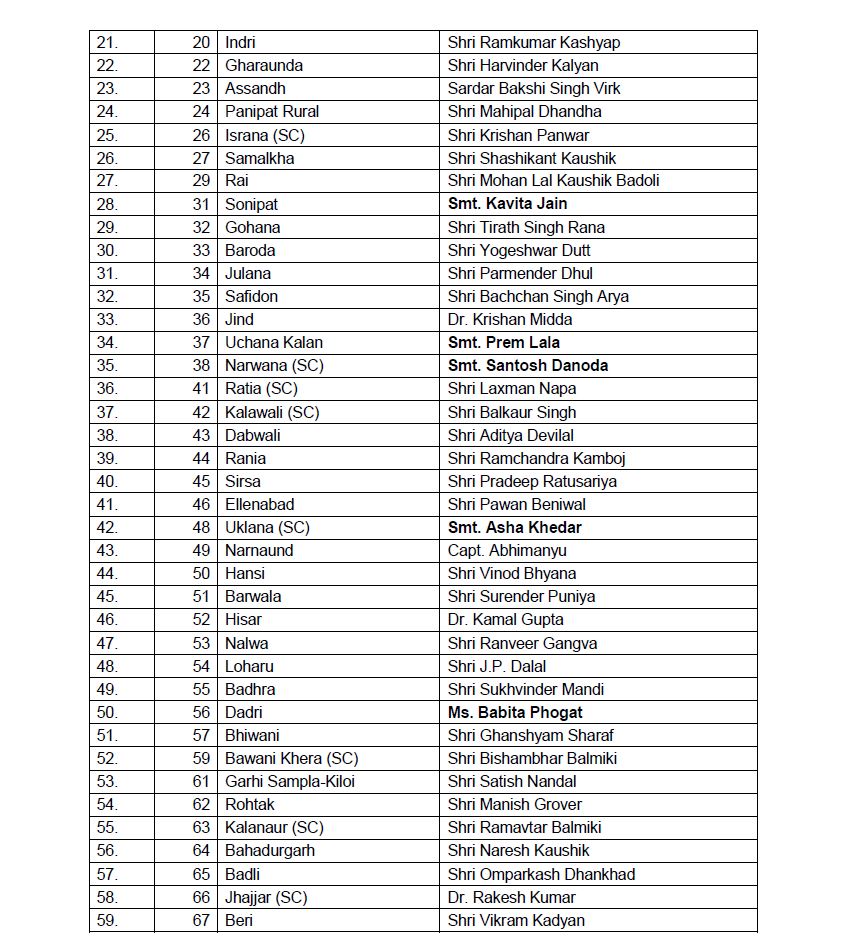