Home» News»Politics»Bihar Election 2020 LIVE Updates: Only Someone Who Has Done Good in the Past Can Do Good in the Future, Says Nadda

Bihar Election 2020 LIVE Updates: Only Someone Who Has Done Good in the Past Can Do Good in the Future, Says Nadda

Bihar Assembly Election 2020 LIVE Updates: BJP president JP Nadda is addressing an election rally in Begusarai, listing the achievements of the Nitish Kumar-led NDA government in Bihar. The Shiv Sena, meanwhile, has termed the Munger firing incident as an “attack on Hindutva” and questioned the alleged silence of the Bihar Governor and BJP leaders on it. “If such an incident were to happen in Maharashtra, West Bengal or Rajasthan, governors and BJP leaders would have demanded President’s Rule,” Shiv Sena leader Sanjay Raut said.

Bihar yesterday recorded 55.69 per cent turnout in voting for first phase of elections, with nearly 2.15 crore eligible voters exercising their franchise. According to the Election Commission, as compared to the corresponding assembly segments which went to poll in the 2015 state elections and the 2019 Lok Sabha polls, the turnout this time was higher. Why Did Tejashwi Remove Parents' Faces From Poster: Nadda | I want to tell Tejashwi Yadav that both his parents have been the Chief Ministers here, why did he remove their faces from his poster. If the face is removed, why are they not asking for forgiveness from the people of Bihar?: JP Nadda at Begusarai.

Begusarai itself is a land of political consciousness. Talking about Bihar, Jayaprakash worked to give an alternative government in independent India. The earth which has given direction to the country, it is in the direction of giving direction to Bihar. All of you unite and win the NDA candidates: Nadda.

Our Achievements Our Strength: Nadda | BJP National President J P Nadda addresses a public rally in Begusarai, Bihar. "You'll believe the one who has done something good in the past, then only that person will do good in future. We can proudly state our achievements in front of public, that's our strength," he said. Congress delegation led by Randeep Surjewala met Bihar Governor Phagu Chauhan over Munger lathi-charge and firing incident. "We demanded immediate suspension of CM Nitish Kumar and Dy CM Sushil Modi. Compensation of Rs 50 lakhs must be given to family of man who was killed," said Surjewala. MoS Home Nityanand Rai hits out at Opposition on politics over Bihar polls and protests against French President Emmanuel Macron, asking Congress leader Rahul Gandhi to apologise. World is fighting against terrorism but Congress and NCP wants the nation to fall behind, says Rai. He also hit out at the Oppn over politics on Munger firing incident. 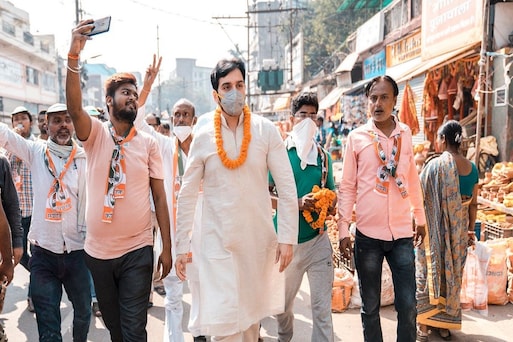 Not much has been known so far about his children's political aptitude, though it is common knowledge that unlike twin brother Kush, Luv did evince interest in acting but failed to make it big

LJP chief Chirag Paswan thanks the people of Bhagalpur and asks them to vote for party candidate, Rajesh Verma, to initiate for #Bihar1stBihari1st. (Image: Twitter/iChiragPaswan) WATCH | LJP chief Chirag Paswan addresses the public during an election rally in Gopalpur and requests all to vote for party candidate Suresh Bhagat.

Continously Working for Development: CM | Have been continuously working for the development of Bihar. We have worked to provide employment to the youth, assured participation of women and a steady increase in the standard of living of the people of Bihar, says Chief Minister Nitish Kumar.

Swift Action by Bihar Govt: HAM Chief on Munger Incident | It won't be right to comment on Munger firing incident before the findings of the probe are out. But Bihar govt has taken swift action into the incident and is doing what is required: Hindustani Awam Morcha (HAM) chief Jitan Ram Manjhi. On Munger firing incident, DIG Manu Maharaj says situation is now normal and the police is monitoring the situation closely.

"Situation normal now, our force is deployed & we are monitoring continuously. We'll find those who caused arson and action will be taken. What caused the man's death (on Oct 26) is subject of probe, won't comment on it," says DIG Manu Maharaj on arson in Munger yesterday #Bihar https://t.co/hQicA6zArM pic.twitter.com/xFgbZMq86I

Modi Govt Gave Special Priority to Bihar by Doubling Funds Compared to UPA: Anurag Thakur | The Modi government has given special priority to Bihar by giving double funds and assistance compared to the UPA's tenure reflecting commitment towards transforming the state, Union minister Anurag Singh Thakur has said. To accelerate growth of the state, the Modi government, during 2014-2019, provided Bihar double the amount totalling Rs 1,09,642 crore as compared to Rs 50,008 crore during the UPA 2009-14 through grants-in-aid, he said. This is an increase of 119 per cent over the amount of funds given by the United Progressive Alliance (UPA) to Bihar, Thakur said as part of the election campaign in the poll-bound state.

Neeraj Yadav wrote the story of development of Barari in 2015 - 2020, no other MLA in the history of the constituency. Now the time has come that Yadav should be given the command of Barari to carry forward the wind of development that he has shed: RJD.

Raut Questions BJP's Silence Over Munger Incident | Munger firing incident is an attack on Hindutva. If such an incident were to happen in Maharashtra, West Bengal or Rajasthan, governors and BJP leaders would have demanded President's rule. So, why is Bihar governor and BJP leaders not raising questions?: Shiv Sena leader Sanjay Raut Politics is unfortunate, however, strictest punishment must be given to the perpetrators, says BJP MP Sanjay Jaiswal on Munger firing incident.

BJP MP Sanjay Jaiswal hits out at RJD over demand of security for Tejashwi Yadav, says those who have Anant Singh and Shahabuddin in their party need not worry about security.

WATCH | As far as the question of population is concerned, that is decided only after the census and that decision is not in our hands. We would like that reservation should be proportionate to caste population, there is no second opinion about it: Bihar CM Nitish Kumar during his election rally yesterday.

As far as the question of population is concerned, that is decided only after the census & that decision is not in our hands. We would like that reservation should be proportionate to caste population, there is no second opinion about it: Bihar CM Nitish Kumar Voting in the three-phase election for Bihar's 243-member Assembly will be held on October 28, November 3 and November 7. The results will be announced on November 10.

Proper Security Deployment for Tejashwi: RJD | There is a of lack of security arrangements being provided to Tejashwi Yadav in his rallies and the Election Commission should ensure proper security deployment for him: Rashtriya Janata Dal (RJD). He also said that the Grand Alliance is now setting agenda for Bihar's development as its promise of sanctioning 10 lakh government jobs at the first cabinet meeting after coming to power.

READ | Bihar Assembly Elections 2020 Phase 2: How to Get Voter ID by Name, EPIC Number in Voters' List at nvsp.in As voting for the second phase is scheduled on November 3, electorates must be wondering how they can search their voter ID. For that, they just need to go to National Voters’ Service Portal (NVSP) at…

CM Ruined Present, Future of 2 Generations: Tejashwi | CM Nitish Nitish knows that he has ruined the present and future of two generations with the collapse of education, health, industry during his 15 years of rule in Bihar, so he never speaks about unemployment, jobs, factories, investment and migration. Should he not speak on these issues?, says RJD chief Tejashwi Yadav.

In the 2015 assembly elections, the turnout was 54.94 per cent in the corresponding constituencies. In the 2019 Lok Sabha polls — with the same assembly seats mapped to parliamentary seats — the turnout was 53.54 per cent. “So, the turnout in phase one is higher than both Assembly and Lok Sabha elections,” a spokesperson said on Thursday while issuing the final figures for the first of the three-phase polls.

The next phase of polling will be held on November 3 and the final phase is on November 7. A total of 71 assembly constituencies of Bihar spread across 16 districts went to polls on Wednesday in the first phase amid tight security and with COVID-19 guidelines in place. Of the nearly 2.15 crore electors eligible to exercise the franchise, 1.12 crore are male, 1.01 crore female and 599 are categorised as third gender, according to data provided by the Election Commission.