Bihar Election 2020 Hightlights: RJD leader Tejashwi Yadav today attacked the BJP on the issue of inflation, saying farmers were being destroyed, youth were unemployed and starvation was on the rise. "Inflation is the biggest issue. BJP people used to wear a garland of onions. Now it's about to touch Rs 100/kg. There's unemployment, starvation is rising, small traders are destroyed, poverty is rising. GDP is falling, we're going through an economic crisis. Those who were speaking about onion when it touched Rs 50-60/kg are now silent when it has crossed Rs 80/kg. Farmers are being destroyed, youth is unemployed, Bihar is poor and people are migrating for education, jobs & medical help. Starvation is on a rise," he said. The campaigning for phase 1 of the high-decibel Bihar elections draws to a close today ahead of the voting on October 28.

Without taking Lalu Yadav’s name, Bihar Chief Minister and Janata Dal (United) president Nitish Kumar alleged on Monday that his party was forced to part ways with the Rashtriya Janata Dal (RJD), with which it had formed government in 2015, because the RJD patriarch did not just refuse to come clean on corruption allegations but also “resumed his old ways”. Read more Calling for a Nitish-free government in Bihar, Paswan appealed to voters to choose the BJP in seats where the LJP has not put up candidates.

NCP Takes on Both NDA, Mahagathbandhan in Bihar | With the objective to gain political ground in Bihar, the Nationalist Congress Party (NCP) has announced it will contest the Bihar Assembly elections independently against the NDA and the Mahagathbandhan on 145 seats with majority of them belonging to Seemanchal area. The party has also roped in Bhojpuri actor Sudip Pandey as its star campaigner. Seemanchal includes West Champran, East Champaran, Araria, Madhubani, Purnia and Supaul which are considered flood-affected districts due to which large number of people migrate from here.

Update | Tejashwi Yadav has now recieved a notice from the Election Commission for flouting rules related to the publication of criminal cases ahead of elections in the state.

BSP president Mayawati on Monday warned voters in Bihar to guard against "conspiracies" of rival parties as she sought support for her party's alliance in the polls. Voting for 243 assembly seats in Bihar will be held on October 28, November 3 and November 7. In a tweet, the former UP chief minister said, "Preparations for the first phase of the Bihar assembly elections begins today with the end of the election campaign. Therefore, there is an appeal to everyone that they should take care against all kind of conspiracies and tactics of opponents and cast their votes and make the BSP and RLSP coalition successful.

Update | The Bharatiya Janata Party (BJP) on Monday once again attacked the RJD - the main party of the 'Mahagatbandhan' for getting into an alliance with the CPI-ML. BJP president JP Nadda led the charge against RJD-CPIML alliance while addressing a rally in Bihar's Purnia."The RJD, a party of chaos, has now reached an agreement with the CPI-ML. The CPI-ML had killed swayamsevaks, Ram devotees. Along with these destructive people, the party of chaos has met which is now joined by the Congress," alleged Nadda. Lok Janshakti Party is contesting on 138 seats and the party had earlier said that it will field candidates against Nitish Kumar’s JD(U).

'Way His Film Flopped, Chirag Will Also Flop in Politics' | JD(U) leader Sanjay Jha said on Monday - "The way his film flopped, Chirag Paswan will also flop in politics. He starred with Kangana, now see where she has reached. Similarly, Sushant made his mark in Bollywood without any background. Chirag is a 'Jamura' dancing to someone else tunes."

Caste Politics in Bihar | With just two days remaining for voting in the first phase of the Assembly polls, the contest is panning out between the backward and forward castes in Bihar for the opposition Mahagathbandhan and the ruling NDA respectively. Such a vote polarisation, deliberately effected through statements of the leaders of the two groupings, seems to be turning into an advantageous situation for the Mahagathbandhan.

During a rally of Prime Minister Narendra Modi in Sasaram on October 23, he said that 10 per cent reservation will be given to the upper castes belonging to the economically weaker section.

Tejashwi Yadav, the CM face of the Mahagathbandhan, during a rally in Sasaram district on Monday said that poor people fearlessly walked in front of Babu Sahab (Rajput) and other upper caste people of Bihar when his father Lalu Prasad Yadav was the Chief Minister.

With Just a Smartphone and Selfie Stick, These Young Bihar Journalists are Reporting the Unseen & Unheard While the mainstream media has failed to raise the local issues, an initiative by a young journalist has brought the region back to news in the digital space.

Previously | Taking serious exception to the BJP's poll promise in Bihar of providing free Covid vaccine if the party is voted to power, the Congress in Karnataka termed the saffron party as "Opportunist BJP" while the Karnataka BJP countered it by asking the Congress to "remove hate Modi glasses" and know the difference between governance and poll promise.

Holding Bihar Chief Minister Nitish Kumar responsible for not developing religious tourism in his 15-year-rule in the state, LJP chief and MP Chirag Paswan on Sunday asserted that he will develop various places associated with sufi saints in the state to improve revenue collections. LJP will implement its Bihar 1st, Bihari 1st vision document after coming to power which talks of promoting religious tourism in the state, he said in a series of tweets. Read more.

Political parties across Bihar have stepped up poll campaigning as only three days are left for voting in the first phase of Bihar Assembly Elections 2020. As per the final leg of the CVoter Opinion Poll, nearly 29.5 per cent of state's population have shown their interest in bringing incumbent Chief Minister and JD(U) president Nitish Kumar back to power. Read more Addressing an election rally here, Nadda said, "Some people indulge in conspiracies during elections. They want to make a dent in the NDA. On one hand, they criticise Chief Minister Nitish Kumar but…

Nadda Indirectly Attacks Chirag Paswan | BJP chief J P Nadda Monday said some people are trying to make a dent in the NDA alliance during the ongoing polls in Bihar and &quot;we should remain cautious against them&quot;, in remarks seen as an oblique attack on LJP president Chirag Paswan. Addressing an election rally here, Nadda said, &quot;Some people indulge in conspiracies during elections. They want to make a dent in the NDA. On one hand, they criticise Chief Minister Nitish Kumar but on the other they praise Prime Minister Narendra Modi.&quot; Though he did not name him, Naddas remarks is seen as a repudiation of Chirag Paswans political salvos against the chief minister but praise of Modi. Bihar Election 2020: Among the prominent parties while RJD is contesting on 42 of the 71 seats in the first phase, JD(U) candidates are in 41 constituencies, BJP (29), Congress (21) and LJP nominees…

Of the 7.18 crore voters in Bihar, nearly 3.66 crore voters are below the age of 39. In other words, half of Bihar's electorate is young voters. This figure includes 78 lakh youths who will cast their ballots for the first time. Given the differences of caste, gender, religion and finance among them, could there still be some resonance among this potential constituency as it goes to the polling booths over the next two weeks? Read more

The town of Kishanganj on the northern verge of Bihar falls near the River Mahananda. A collective of few districts, including Kishanganj, is located in Seemanchal area, one of the least developed areas in the state. With a low literacy rate and underinvestment in infrastructure, the area remains in news mostly for two reasons: floods and Muslim politics, owing to the high representation of Muslims in the region. Read more.

CPI(ML) the X-Factor in Bihar as RJD-Congress Move Away from Politics of Identity to Politics of Subsidy? A revisit of the composition of the grand alliance and the list of the candidates fielded by it, gives credence to Tejashwi Yadav’s claim of his politics not just being about M(Muslim) and Y(Yadav)…

Lok Sabha MP and AIMIM chief Asaduddin Owaisi Sunday slammed Bihar's ruling JD(U) and opposition RJD over the issues of amendments in the citizenship act and the NRC as he addressed a poll rally here. While the Centre has said it will implement both the measures, the RJD has remained "silent" and BJP ally JD(U) has given "misleading" statements, Owaisi said. Read more. Many agree with the view that the 10 lakh government jobs that Tejashwi Yadav promised may be undeliverable, but nobody argues with the fact that he has single-handedly brought the poll campaign…

"Why give another chance to a CM who didn't provide employment & failed to eradicate poverty. When migrants got stuck, where was his chopper? Then Nitish Ji said, stay where you are," says Tejashwi pic.twitter.com/U9MQsXOuZc

Hitting out at the centre on the rising prices of vegetables, RJD leader Tejashwi Yadav on Monday held up a garland of onions saying that the farmers are being destroyed in the country. The attack over rising price came two days before the state goes for polls to 71 seats in the first phase of assembly elections. Read more.

From Free Vaccine to First Signature, These 5 Statements Sum Up the Bihar Campaign So Far 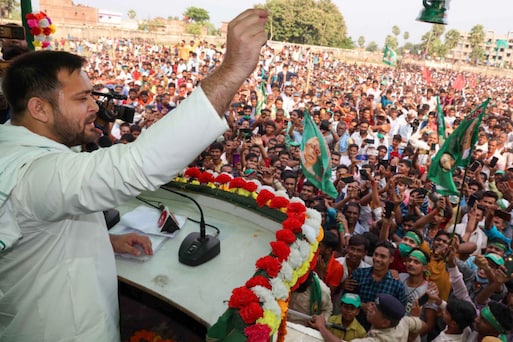 Campaigning for the first assembly election post lockdown was marked by high-voltage rhetoric. From Chirag Paswan hoping for a "#Nitish-free government' to Modi warning voters against those who made…

Bihar, which has 243 assembly seats, will go to polls in three phases - October 28, November 3 and November 7. The counting of votes will be held on November 10. olding Bihar Chief Minister Nitish Kumar responsible for not developing religious tourism in his 15-year-rule in the state, LJP chief and MP Chirag Paswan on Sunday asserted that he will develop various places associated with sufi saints in the state to improve revenue collections. LJP will implement its Bihar 1st, Bihari 1st vision document after coming to power which talks of promoting religious tourism in the state, he said in a series of tweets.

A grand temple dedicated to Goddess Sita will be built in Sitamarhi, the district in which she is believed to have been born in, he said. Bihar would not have been facing the problem of revenue shortage had Kumar promoted religious tourism in Bihar, he said in a tweet.

Apart from Goddess Sita, Bihar is associated with several sufi saints and religious leaders like Lord Buddha, Lord Mahavir and Sikh guru Guru Gobind Singh and places associated them will be connected through a special circuit by the LJP, he said. The promotion of religious tourism will help the state in increasing its revenue, he added.

Paswan, who stumped for his party candidates at Karagahar and Chenari in Rohtas district on Sunday, said the next government in the state will be a "Nitishmukt" (Nitish Kumar free) government as voting for it would mean pushing Bihar to backwardness. Paswan, who has been professing his support to Prime Minsietr Narendra Modi and the BJP while opposing JD(U), said Kumar should be thankful to the saffron party for giving full page advertisement in newspapers in his favour.