By snatching one more state from the Congress, BJP tightened its grip over the country’s politics and now controls 19 out of the 29 states.

New Delhi: The Bharatiya Janata Party staved off a strong challenge from Rahul Gandhi-led Congress to win the Gujarat Assembly elections for the sixth time in a row and trounced its rival in Himachal Pradesh for a sweeping victory.

The lower than expected margin of victory in Gujarat, however, meant that the euphoria in the BJP camp was tempered on Monday. It took 99 seats in the 182-member assembly, failing to cross the psychological barrier of 100, and down from the 115 it had won last time. The tally also fell far short of its own lofty target of 150 seats. In Himachal, the BJP coasted to a comfortable win, getting 44 out of the 68 assembly seats.

By snatching one more state from the Congress, BJP tightened its grip over the country’s politics and now controls 19 out of the 29 states.

Prime Minister Narendra Modi hailed the victory in Gujarat, where it has been in power for 22 continuous years as “unprecedented”, noting that retaining office was once considered a huge achievement in the country.

He said it was a verdict for ‘vikas’ (development) and showed that people of the country are ready for reforms like the GST. He also accused the Congress of promoting casteism in the elections, and said there were "many hidden forces at work" to bring the BJP down.

Gujarat is a prestigious trophy for the BJP given that both Modi and BJP chief Amit Shah hail from the state. The two leaders led a high-octane campaign to counter Gandhi, who grew in influence with his own brand of “soft Hindutva” and clever barbs to target the BJP on issues like GST, corruption and development. The elections became a virtual trailer for the next Lok Sabha elections, which are to be held in 2019. The results showed that Modi still rules the ballot box, but it also made Gandhi, who recently became Congress president, a serious challenger as he appeared more confident in taking on the BJP bigwigs.

Shah pointed out that though the BJP lost 16 seats, its vote share rose by a little over 1 per cent to 49.1 per cent compared to five years ago. He blamed the Congress for its lower seat tally and said he did not know the Congress would practice such dirty politics when he set the target of 150 seats.

The Congress, which had 61 seats in 2012, also improved its vote share, which touched 41.4 per cent - a two per cent increase. It was helped by the three young turks - Hardik Patel, Alpesh Thakor and Jignesh Mewani. Combined with its alliance partners, the Congress had a vote share of over 42 per cent. 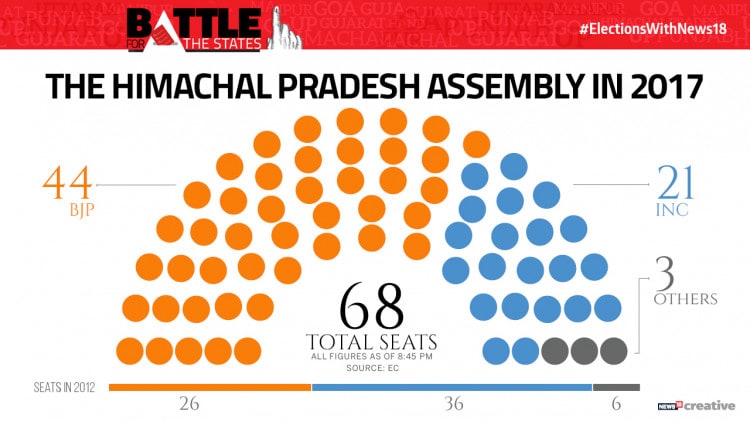 Regaining power in Himachal Pradesh, the BJP was slightly short of a two-thirds majority in the 68-member house. With a 10 per cent jump in vote share that touched 48.7 per cent, it garnered 44 seats. It had won 26 seats in 2012.

The Congress bagged 21 seats, down from the 36 seats earlier. Its vote share declined by 1 percentage point to 41.8 per cent.

But the victory was not without disappointment for the BJP as Prem Kumar Dhumal, the party’s chief ministerial candidate in the hill state, lost to Congress Rajendar Rana in Sujanpur, after he changed his traditional constituency of Hamirpur. He was made the CM face only nine days before the polling.

Rahul Gandhi said his party "accepts the verdict of the people and congratulates the new governments in both states" in a tweet. He also thanked his party members for fighting "anger with dignity, decency and courage."

The BJPs dip this time was touted by the Congress as a reflection of Gandhi’s efforts during the campaign, when he appeared to have improved his reputation as a politician. "The Congress tally has gone up there, while the BJPs numbers have fallen. This is the start of Rahul Gandhi’s political story," senior Congress leader Kamal Nath told reporters outside Parliament.

The BJP, on the other hand, said what matters is the victory. “Jo jeeta wohi Sikandar (whoever wins is the king),” said Union minister Smriti Irani, when asked if the Congress gave her party a tough fight.