Bonding Over Blisters and Blues, Meet the Sisterhood of Rahul Gandhi's Travelling Bands

The women in Rahul Gandhi’s Bharat Jodo yatra have physically, emotionally and mentally committed to covering 3,570 km across 12 states in 150 days. The journey is arduous but their spirit and solidarity are unmatched

150 days, 3,500 kilometres and 12 states. As Rahul Gandhi’s Bharat Jodo yatra enters its third leg in Karnataka, the first BJP-ruled state on the Kanyakumari-to-Kashmir journey, News18 walks along to decode what is fuelling the Congress leader and scores of others on the arduous march. In this series, we speak to Rahul Gandhi’s fellow yatris and locals to gauge the mood, and analyse the political and electoral impact of the padyatra.

More than one-third of the 122 yatris marching along Congress leader Rahul Gandhi in his Bharat Jodo yatra are women. Physically, emotionally and mentally committed to covering 3,570 km, the women have left their families behind for 150 days for a bigger mission.

These 35 women, who will cover the entire stretch across 12 states, say they are not only making memories, but have found new friends along the way and unforgettable experiences they can take back home to narrate.

While their spirit is commendable, the yatra is not easy on women, but their enthusiasm remained as infectious after a day’s arduous journey as it did at dawn. News18 spoke to a few women yatris as the platoon entered its third leg in Karnataka. They say they feel empowered every single day as part of the Bharat Jodo yatra.

The women spend a good part of each day on the road and have been provided accommodation in mobile containers that travel along with the volunteers across states. It was tough at first with many of them not used to walking such long distances and waking up in the early hours of the morning. But as the days progressed, they not only fell into a routine, but began enjoying the spirit and support they received from each other.

“We need to wake up before 5:30 am as we share the accommodation with our sisters and we need to ensure that we are ready and don’t delay others. By 6am, we assemble and sing the national anthem. We also have a small prayer session and then we are off to an energized start,” says Ishita Sedha, who hails from Dehradun and is also national secretary of the Indian Youth Congress.

“Many of us had blisters on our feet. We had to walk the next day. But when we see the smiles on people’s faces, when women who are my mother’s age walk up to me and hold my hand or children just wave at us, we feel that we can go another extra mile. Just to see them happy,” the 32-year-old adds. It was tough at first for many women in the yatra, but they soon began enjoying the routine and each other’s company. (Rohini Swamy/News18)

Basic amenities like washrooms and resting facilities are available at every stop the yatris make to rest between locations. But the women need to be extra careful when it comes to personal hygiene. They do find it difficult to share bathroom facilities during pit stops, but make do with sanitizing liquids and tissues to maintain basic hygiene.

“We have to take care of ourselves. We are traveling as one family and we need to keep ourselves healthy till the end, no matter what,” adds Ishita.

PART 4 | Cherished by Gandhi-ji, This Khadi Village’s Future Hangs by a Thread. Can It Still Weave Magic for Rahul?

Recalling how she fell ill during the Kerala stretch of the yatra, Ishita says she retired for the day in the bus that was taking them between locations.

“While I sat and watched, we were stuck in a 5-km traffic jam. Despite that, people were pouring in, walking in the heat just to be part of this massive movement. I saw young men, women and the elderly come out enthusiastically and I said to myself, it would be very unfair if I just sat in the bus while they walked several kilometres in rain and shine just to support us.” To unwind at the end of a tiring day, the volunteers meet post-dinner for a briefing on the next day’s plan and then sit down to share some light moments. (Rohini Swamy/News18)

Ishita Sedha’s fellow yatra Nandini Hooda is an inspiration. Having been an international-level sportsperson, the 52-year-old has seen the tough life. But this time, she is on a mission.

“The cause that Rahul Gandhi has taken up to stitch back India as one nation, at a time when we’re facing social polarisation based on religion and caste is commendable. He is here to listen to the people, their issues, their needs, their problems and discuss solutions. The wealth of India is in its villages and Rahul Gandhi is traveling through these villages to listen to what people have to say,” says Nandini, who holds the post of secretary, All India Women’s Congress.

Nandini, who hails from Chandigarh, shares how motivated they all feel each day when they get ready to cover another 25 to 30 km and meet people. ‘The BJP’s stand on identifying people based on their dress, discriminating people based on their religion and food, none of that will work. Rahul Gandhi is addressing real issues of unemployment and price rise which hurt you and me.”

Both women say this passion is what will help them complete the Bharat Jodo yatra successfully.

So what are the issues dear to their heart that they hope to understand better through this yatra? Almost every woman in the yatra had a similar answer – to remove gender inequality, stop hate and violence, empower women and help bring in an environment where their children grow up to be strong, patriotic, and humane Indians.

BONDING ON THE GO

To unwind at the end of a tiring day, the volunteers meet post-dinner for a briefing on the next day’s plan and then sit down to share some light moments. Some days, they dance away their blues with young tribal artists who join along the way.

“We sing songs and tell stories. Since it’s Navratri, we have had two dandiya nights and we thoroughly enjoyed ourselves,” says Nandini.

Apart from those listed as “permanent” yatris for the entire walkathon, many young girls and women have been joining in for different stretches.

“Its serious business as we can also understand the real problems of people while spreading the message of unity and love,” says Sreekala, a young college student who joined the Karnataka leg of the campaign after she read about the success of the yatra in Tamil Nadu and Kerala.

“I was nervous at first when I saw a sea of people join Rahul Gandhi when he walked through the roads of Chamrajanagara. Then I met a few women yatris who warmly welcomed me and walked alongside me for a while. I was happy to have been a part of it, although it was for a brief while,” she says.

The women also share with each other the emotional strain of being away from families.

“When I saw Rahul Gandhi undertake this yatra to try and highlight the deterioration of the socio-economic and religious fibre of our country, I could not stay away. I could not stay at home and watch my country get to this state. As a citizen of the country, it becomes my responsibility to become part of this change,” says Jyoti Rautela from Uttarakhand. Jyoti Rautela from Uttarakhand says her family has been supportive of her decision to join the Bharat Jodo yatra. (Rohini Swamy/News18)

It is the greater good that keeps them all motivated, says Jyoti. “It is tough, especially was at the beginning. I would miss my family a lot and as a woman, it required more adjustment as we have more responsibilities. My husband and my family are very supportive and I am very determined that I should fight for this cause and that makes me stronger.”

Avani Bansal is a lawyer by profession and says she joined the yatra as she felt it to be an important cause. “We need to save the Constitution of India. That is why I joined this unparalleled movement… This is the first time a serious attempt is being made to see women not just as voters, but as a strong political voice. It is heartening to see how Rahul ji walks with women and the way they greet him, it’s very infectious. This is just the beginning,” she says during a break on Day 2 in Karnataka. 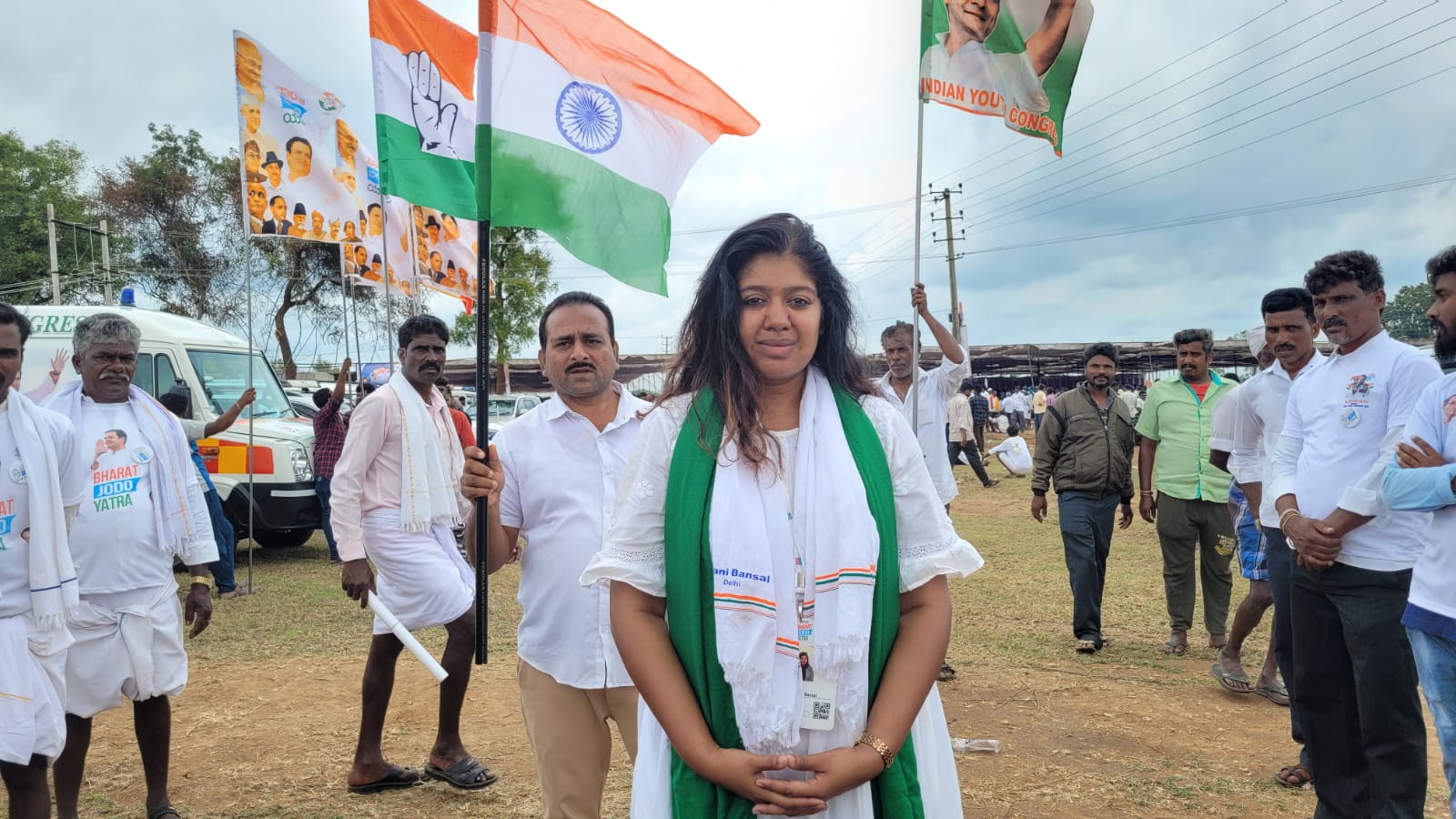 Avani Bansal is a lawyer by profession and says she joined the yatra as she felt it to be an important cause. (Rohini Swamy/News18)

Pratibha Raghuvanshi’s voice is hoarse from all the sloganeering. Hailing from Madhya Pradesh, she feels that she has been able to see for herself the unity in diversity that India stands for. “We don’t know the language, but we can see love and affection in their eyes. Their precious smiles are non-verbal communication with us. This is the India we know and want to save.”

Just like other yatris, Pratibha has picked up slogans in the local languages of the states they pass through.

“When we started in Kanyakumari, we would shout Vazhaga Vazhaga Vazhagave (hail or long live) and then we learnt Abhivadyangal, Abhivadyangal, Rahul Gandhi Abhivadyangal (Congratulations Rahul Gandhi) and now in Karnataka it is Jodisi Jodisi Bharatha Jodisi (Join, Join, Join India together). All of this boils down to one thing - humanity is our religion,” says Pratibha before she leaves to join Avani and Nandita on their “real walk of freedom”.