He said the mandate is also recognition of Prime Minister Narendra Modi's efforts to uplift the North East region.

Bypolls Results 2021 Updates: Assam Chief Minister Himanta Biswa Sarma Tuesday credited the power-packed perormance of NDA in the by-poll in the five Assembly seats in the state, whose results were declared during the day, to the development work by his government in the last five-and-half months and asserted that all poll promises will be fulfilled. Read More

Himachal Bypoll: What Worked for the Congress and What Didn't for the BJP

Asweep by the Congress in Himachal Pradesh bypoll just a year ahead of the state assembly elections could not have come at a worse time for Chief Minister Jai Ram Thakur who had hinged his party’s campaign to ‘clean and efficient governance’. READ MORE

The ruling Congress in Rajasthan on Tuesday won the bypolls to the Vallabhnagar and Dhariawad Assembly segments. The main opposition BJP not only lost the elections, its candidates stood third and fourth in the Dhariawad and Vallabhnagar segments, respectively. READ MORE

“BJP candidates never get cars, mics, or accommodation during the by-elections here. Police get the voting done, which is one-sided and not neutral. Earlier, too, we lost the by-elections but won the general elections at the same place,” says Dilip Ghosh on Bengal by-polls results.

We won all 5 seats with a huge margin. Today’s electoral victory in Assam isn’t an ordinary victory as in every seat we won by a margin higher than in general elections. People of North East have reposed their faith in leadership of PM Modi: Assam CM Himanta Biswa Sarma on bypolls.

Himachal Pradesh CM Jai Ram Thakur said he humbly accepts the verdict given by people in by-elections to one Lok Sabha seat & three Assembly constituencies. He said the results were not as per expectations. He said that BJP lost Mandi Parliamentary seat with a narrow margin: CMO

Himachal Pradesh CM Jai Ram Thakur said he humbly accepts the verdict given by people in by-elections to one Lok Sabha seat & three Assembly constituencies. He said the results were not as per expectations. He said that BJP lost Mandi Parliamentary seat with a narrow margin: CMO https://t.co/EdJZoJN64r pic.twitter.com/ct5jYO7pR7

The Shiv Sena on Tuesday rejoiced its first win outside Maharashtra after the party’s candidate Kalaben Delkar won a seat in the Dadra and Nagar Haveli bypolls.

“Let us go by the wishes of the people of Karnataka…They are looking towards change,” ANI reports Karnataka Congress President DK Shivakumar as saying, on Congress winning the Hangal Assembly seat.

BJP Leads in Huzurabad With 11,000 Votes

After 15th round, BJP is leading in Huzurabad with a margin of over 11,000 votes.

BJP, Congress Win One Seat Each in Karnataka By-polls

Congress wins all three Assembly seats in Himachal Pradesh that went to by-polls on October 30. 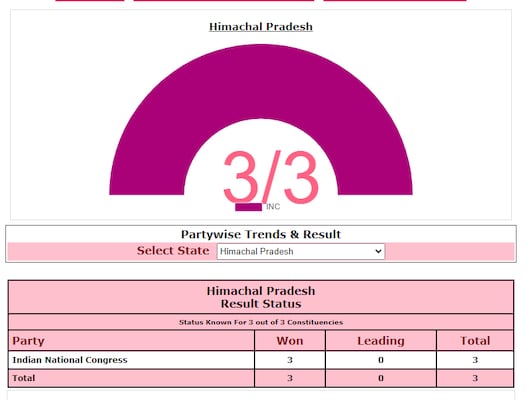 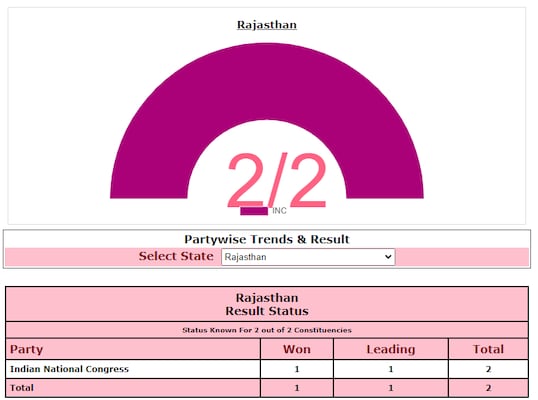 The BJP maintained its lead over the ruling Telangana Rashtra Samithi (TRS) in the by-elections to the Huzurabad Assembly seat on Tuesday. Eatala Rajender of the BJP was leading by 3,270 votes against his nearest rival G. Srinivas Yadav of the TRS at the end of the eighth round of counting.

BJP won the bypoll to Thowra and was leading along with its allies in four seats of Assam assembly on Tuesday afternoon, as per the Election Commission. BJP candidate Sushanta Borgohain, who switched over from the Congress, won the Thowra seat by a margin of 30,561 votes for a third term, the EC said.

TMC's Sovandeb Chattopadhyay Wins Khardah by a Margin of Over 94,000 Votes

TMC's Udayan Guha Leading by a Margin of Over 1.55 Lakh Votes

In Himachal, Congress Leads on 2 Seats; BJP in Advantage in MP

In Bengal's Shantipur, TMC Leads with a Huge Margin

BJP's Big Lead in Assam as Party Leads in 3 Seats, UPPL in 2 Seats

TMC’s Udayan Guha Leading by Around 30,000 Votes in Dinhata

He said the mandate is also recognition of Prime Minister Narendra Modi’s efforts to uplift the North East region.
He also hinted that two to three opposition MLAs might switch over to BJP and bypolls to the seats from where they were elected are likely to take place along with Majuli Assembly seat, which was vacated by Union Minister Sarbananda Sonowal.

“I humbly accept the love and blessings of the people of Assam. The winning margins have soared enormously as all the seats were bagged by over 25,000 vote margins. In some seats these are records,” Sarma said at a press conference here.

Not only in Assam, the NEDA (the regional wing of NDA of which Sarma is the convenor) has won all the seats in the by-poll in Meghalaya, Mizoram and Nagaland. “This is again a proof that people of the region support Modi in his developmental work in the region,” Sarma said.

“The mandate is testimony to the development work the NDA government in Assam is undertaking in the last five-and-half months since its election and a recognition of Prime Minister Narendra Modi’s endeavour to uplift the Northeast,” he said.

After the NDA victory in Assam all the alliance partners – BJP, AGP and UPPL will have to work with more vigour for the development of the state. “We cannot take rest, we cannot become complacent. We will have to work at a faster pace now. We will fulfill all the promises made during the campaign of the election,” he said.

With these victories in the bypoll, BJP’s strength in the 126-member Assam Assembly has increased to 62 and UPPL’s to seven. The other NDA ally AGP, which did not field any candidate this time, has nine MLAs.

Opposition Congress has 27, AIUDF has 15, BPF three and CPI(M) one MLA. There is an Independent too. Asked if more MLAs from the opposition in the state will join the saffron party, Sarma shot back saying said all of them would have done so if there were no political compulsions.

“The way our ministers and leaders worked will encourage many to join the BJP. I can only say that the people in two to three more constituencies want by-poll. I cannot say anything more than that … But we cannot continue to have by-poll regularly. Now by-poll will take place in Majuli,” he said.

Sarma said that he hoped to see during his lifetime BJP MLAs all the 126 seats of Assam Assembly. “That day will surely come,” he added. The Chief Minister also announced that the municipal elections in the state will be held during February 2022 if the COVID-19 situation did not worsen.

On the demographic change in the voting pattern during the October 30 by-poll, Sarma said BJP has got huge number of votes in Bhabanipur and Gossaigaon seats where there are considerable number of minority voters.

“During the campaign I had focussed on development only. I also said that eviction at Gorukhuti was just. The agriculture project there (for which the eviction was carried out) is the beginning of self reliance. In future we will work for all tribes and communities so that Assam is among the top five states in India,” he added.

Two perons were killed and several others, including nine policemen were injured in the violence during the eviction drive by the police at Gorukuthi in Darrang district in September. The chief minister asserted that eviction drives in the state will continue and clear encroached lands in places like Lumding Reserve Forest, Barchalla and Dhekiajuli, but through dialogues.

He claimed that the alleged encroachers are from places like Baghbar and Jania, where they already had land but lost them to some “zaminder” type landowners. “We are now thinking of starting land surveys in char-chapori (sandbar) areas and this will clear many doubts. Some handful of people have occupied hundreds of bighas of land and displaced poor people, who moved to other places and encroached lands,” Sarma said.

Harping on encroachment, he said the alleged illegal settlers in Lumding Reserve Forest had come for ginger farming in a huge tract inside it and were brought by three big traders.