‘Calling AMU Anti-national Is an Easy Option for Hindutva Forces’

AMU students during a protest outside the university gate (Photo courtesy: Facebook)

The teachers’ body passed a resolution in its emergent meeting condemning the sedition charges slapped on 14 of its students and requested the President of India, visitor of the university, to take note of the situation that is demoralising the campus.

AMU’s tryst with controversy under the current regime started in 2014 when the NDA government came to power at the Centre.

Soon after, BJP’s Aligarh MP Satish Gautam demanded celebration of Raja Mahender Pratap’s birth anniversary on the university campus and tried to appropriate the legacy of the ‘Jat King’ who contributed in the making of the university.

What followed were allegations of beef being served in the hostel mess. The issue was raked up by Aligarh mayor Shakuntala Bharti. 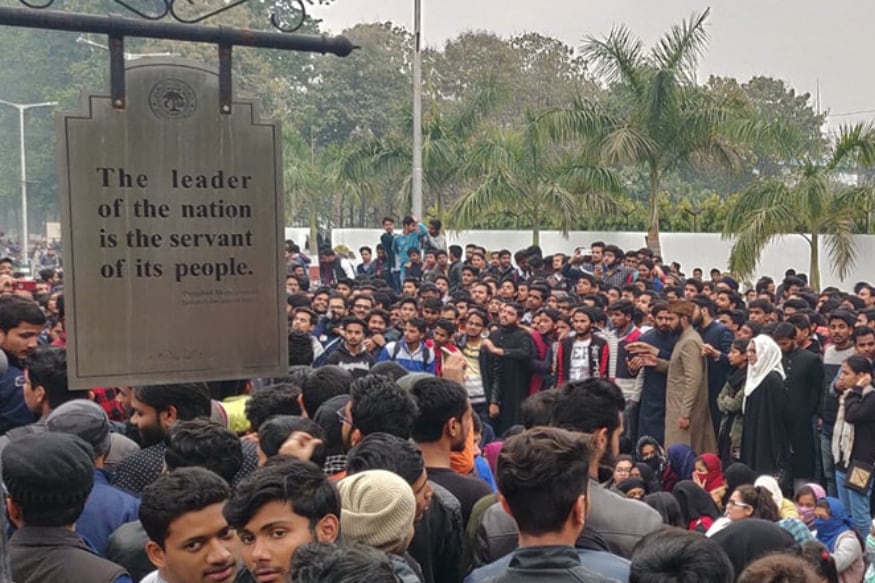 Another episode saw sedition charges being slapped on Kashmiri students studying in the university.

Lodi told News18.com, “Because of the Yogi Adityanath government, Hindu students are speaking against the attacks on them.” One of his demands is to have a “temple” in the varsity as it also has a mosque.

The teachers’ association secretary, Najmul Islam, said they were being pushed to the point where they have to issue certificates of patriotism and love for the country.

“Those who wanted to go to Pakistan have gone. Now there is no point in questioning our love for the country. We chose India. These things suddenly become important ahead of elections. Also, as they have not done any work on development, what could possibly be the poll plank? AMU, of course,” said Islam.

News18.com spoke to experts on how Aligarh Muslim University landed at the centre of controversy, particularly after 2014.

‘AMU was a natural target’

Ahead of elections, the university becomes a laboratory of polarising politics. “Whether attacking Aligarh Muslim University helps them or not, calling it anti-national is an easy option for saffron outfits,” says political science professor Asmer Beg.

Associate professor Hilal Ahmed, who works on political Islam, Muslim modernities, representation, and politics of symbols in South Asia with Centre for the Study of Developing Societies, says that it is a part of the BJP’s political strategy under Narendra Modi-Amit Shah leadership.

He said, “We must remember two aspects of aggressive Hindutva politics. First, intentional creation of an enemy to justify its radicalism. Second, anti-intellectualism. AMU is a natural target.”

What perhaps makes the university an easy target is its past. “It is often associated with the Pakistan Movement. The debate on its minority status in the post-colonial period was also used by the Hindutva forces to criticise minority rights in the name of Muslim appeasement. They now want to capitalise on that. In this sense, the recent development is an extension of the Jinnah portrait debates,” says Ahmed.

Regarding anti-intellectualism, the associate professor says, “Being an intellectual hub, AMU also becomes a direct target. Hindutva politics has created an impression in the last five years that all educational institutions, especially universities, are spoiling tax payers’ money. This argument helps them purse their anti-intellectualism.”

BJP’s Aligarh MLA Sanjeev Raja said it was not his party, but the AMU fraternity that was involved in polarisation. “They call outfits for political discussions on the campus. Whether it is Asaduddin Owaisi or someone else, it doesn’t matter. What matters is if this is the role of the students’ union.”

“This is not the job of the students’ union. The university is not a minority institution yet, as it gets full funding from the government. Yet, anti-government activities are conducted on the campus.”

Not just one university

The moment the news of sedition charges on AMU students spread, students of Jawaharlal Nehru University and other campuses came out in support to avert another JNU controversy.

Though the Aligarh police administration has not found any substantial evidence against the students in its primary probe and may drop the charges of sedition, the grouse remains.

“Police did not act on the university’s complaint, but was quick to act on the complaint of a local BJP leader,” said Hamid Ali.

Both Beg and Ahmed think that attempts to disturb campuses is not just limited to AMU.

This has been happening in other universities like Jawaharlal Nehru University and Central University of Hyderabad.

Ahmed said, “Intellectualism in politics is very important, not merely to impart education, but also to provide direction to society. Universities give critical reflections and if that critical space is targeted, then it becomes easy for any government to propagate the pro-state view.”