In Bellary, VS Ugrappa romped home by over two lakh votes and in Jhamkhandi, Anand Nyamagouda registered an impressive win by a margin of over 39,000 votes. These two seats are in the BJP stronghold of north Karnataka.

Bengalauru: The 4-1 win for the ruling Congress–JD(S) combine in Karnataka is expected to change the political arithmetic in the 2019 Lok Sabha elections. The “hand” and “woman with haystack” together have handed a humiliating defeat to the BJP in two Lok Sabha and two Assembly seats. The BJP managed to retain Shimoga Lok Sabha seat by a small margin, thus saving its face.

The victory margin of the Congress in Bellary Lok Sabha seat and Jhamkhandi Assembly seat has shocked the BJP. Till the last moment the BJP was hoping for a win in at least one of the two seats.

In Bellary, V S Ugrappa romped home by over two lakh votes and in Jhamkhandi, Anand Nyamagouda registered an impressive win by a margin of over 39,000 votes. These two seats are in the BJP stronghold of north Karnataka and its core voters Lingayats are in a large number in both the seats.

Even in state BJP chief B S Yeddyurappa’s fiefdom Shimoga, his son B Y Raghavendra managed to win by a small margin defeating JD(S)’s Madhu Bangarappa. In the 2014 Lok Sabha elections, Yeddyurappa had won from Shimoga by over 3.5 lakh votes. The results have already set off alarm bells in the state BJP.

Shocked by party’s dismal performance Yeddyurappa made no official statement till late in the afternoon. His son’s win after a lot of struggle by about 60,000 votes in Shimoga has also upset him, say close aides of the former CM.

When he did make a statement, Yeddyurappa accused the Congress and the JD(S) of using money and muscle power to win the bypolls in Karnataka, but said the party would introspect the outcome and strengthen before the 2019 Lok Sabha elections.

"The truth of the matter is that money and liquor had a bigger role in this election. Congress and JD(S) won the election using money and power," he said.

Immediately after the results, senior BJP leader and MLA S Suresh Kumar also called for an introspection triggering a mild tremor in the saffron camp. Some state leaders are demanding that a complete overhauling of the current set-up is need of the hour. 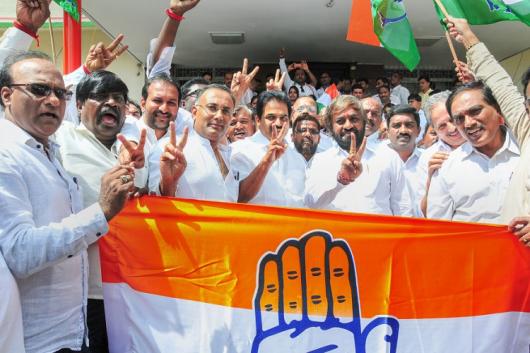 The jubilant leaders of the JD(S) and the Congress have termed the victory as beginning of the end of BJP in Karnataka. Speaking to News18, JD(S) supremo and former Prime Minister H D Deve Gowda said that he was grateful to the people for their faith in the coalition government. “The BJP should realise that the people are angry with their jumlas. The so-called development is a mirage. The BJP tried its best to topple our government. They are still trying. Hope, they understand that the people have rejected them and sit in the opposition”.

Former chief minister Siddaramaiah, who led the Congress’ campaign in all five constituencies, termed the win as a Deepavali gift. “The Congress will bounce back in Karnataka. In the coming Lok Sabha elections in 2019, we in alliance with JD(S) will win at least 20–22 seats. The voters have rejected the BJP,” he said.

KPCC president Dinesh Gundurao said that the victory was decisive. “It is not a small win for us. It is a decisive win. The BJP has been decimated in Old Mysore region. We have won Bellary and Jhamkhandi by a huge margin. We have lost Shimoga by a small margin. It is a warning to BJP.”

The JD(S)’s win in Gowda strongholds Mandya and Ramanagara was a foregone conclusion. Because the BJP is still a minor player in Old Mysore region and the two dominant players – the JD(S) and the Congress came together causing revolt in Congress camps.

After Siddaramaiah managed to douse the flames, the local workers reluctantly backed the JD(S), though some of them reportedly voted for the BJP in Mandya.

According to political analysts, the results may help the Congress in the short term, but it may harm the party in the long run in the Old Mysore region as its voters may move to the BJP to take on the JD(S).

“If our voters move towards the BJP, the coalition may still win the 2019 general elections. But it will certainly affect us in the long run,” said N Cheluvarayaswamy, former minister and Congress leader from Mandya.

The Congress and the JD(S) together have almost 75% votes in the region and it may take some more time for the BJP to gain strength here. But it hopes the political contradictions may lead to the collapse of JD(S)-Congress alliance in Karnataka.

However, the Congress claims the results have cemented the alliance and together with JD(S) it will defeat BJP in the coming elections.