Mallikarjun Kharge was on Wednesday elected the Congress president after defeating Shashi Tharoor in an electoral contest, the sixth in the party’s 137-year-old history. Outgoing Congress president Sonia Gandhi visited Kharge at his residence in Delhi and congratulated him. Karti Chidambaram, a counting agent for Tharoor, declared after the counting process was over that Kharge had won the polls and the Kerala MP had got 1,072 votes.

Of the total 9,915 Pradesh Congress Committee (PCC) delegates that formed the electoral college to pick the party chief in a secret ballot, over 9,500 cast their ballot at PCC offices and the Read More

Veteran politician Mallikarjun Kharge swept the Congress’ 20th Presidential elections on Wednesday, defeating Shashi Tharoor by a massive margin, becoming the first non-Gandhi chief of the party in two decades and the sixth in the party’s 137-year-old history. READ MORE Congress leader Shashi Tharoor said the party held elections after 22 years and there was “bound to be glitches,” in reference to his earlier tweet alleging “irregularities” in the conduct of the election in Uttar Pradesh. “Our party didn’t hold polls for 22 years. In elections of this nature, there were bound to be glitches. Leadership by and large stayed with Mr Kharge, it’s not surprising if you’ve chosen between change and continuity and if you’re part of continuity why did you want change,” he said.

Had Policy in Mind, Many Left Me in Fight: Shashi Tharoor

Senior Congress leader Shashi Tharoor said, “We were never an organization of a dissenter. We had a policy in mind so we wrote that letter and I still stick to those points. Many left me in that fight.”

Congress President candidate and senior leader Shashi Tharoor said he batted on an uneven pitch after he lost to his colleague Mallikarjun Kharge. Addressing the media, he said: “I was not a candidate of dissent. I was a candidate for a change. I want more involvement of congress Karyakartas. Change is not in policy or ideology but operational level.” He further said, “senior leadership decided to stay with Mr kharge so they decided to be with continuity.” Reiterating his earlier statement on unequal ground for the polls, he said, “I batted on an uneven pitch” and was “only cautious” about “ball tampering”, in a reference to the earlier statement on irregularities.

'Have to Unitedly Fight Against Fascist Forces': Kharge

Mallikarjun Kharge, who was declared winner of the Congress president polls today, said, “We all have to work like workers of the party, nobody is big or small in the party. We have to unitedly fight against the fascist forces that are attacking the democratic institutions under the garb of communalism.”

Congress President-elect Mallikarjun Kharge said noted Sonia Gandhi’s “personal sacrifices” and said the outgoing party chief gave her blood and sweat to the party for two decades. “She revived the party and strengthened it. Her tenure will be remembered,” he said.

Mallikarjun Kharge Will Take Charge as AICC Chief on October 26

Newly-elected Congress President Mallikarjun Kharge conveys wishes to his colleague Shashi Tharoor and said: “We both were contenders but everything went smoothly. He came to visit me and we discussed the future of the party. I want to thank him.”

Congress Has a History of Strengthening Democracy: AICC Chief Kharge

‘Congress has a history of strengthening democracy’, says newly-elected Congress President Mallikarjun Kharge. “Today when democracy is in danger, every institute is at threat, once again Congress has set an example of democracy by conducting a successful election.”

It’s a moment of pride that Mallikarjun Kharge became Congress President, he is an experienced leader. Congress will strengthen under his leadership, and our party is united across the country: Rajasthan Chief Minister Ashok Gehlot

'If You Are Irritated by Every Rub, How Will Your Mirror be Polished': Shashi Tharoor

Congress leader Shashi Tharoor in a cryptic tweet quoting 13th-century Persian poet Rumi’s verse wrote, “If you are irritated by every rub, how will your mirror be polished?” Mallikarjun Kharg was declared winner of the Congress president poll after defeating Tharoor. While Kharge got 7,897 votes, Tharoor received 1,072 votes.

Shri. Kharge has always avoided flamboyance and has been the quintessential organisation man working in a self-effacing manner to advance the collective interests of the Congress party. He has the good wishes of all Congressmen and Congresswomen. 3/3

Congress leader Rahul Gandhi congratulated party chief-elect Mallikarjun Kharge after he was declared the winner in AICC polls. “Congratulations to Mallikarjun Kharge ji on being elected as the President of @INCIndia. The Congress President represents a democratic vision of India. His vast experience and ideological commitment will serve the party well as he takes on this historic responsibility,” he said in a tweet. 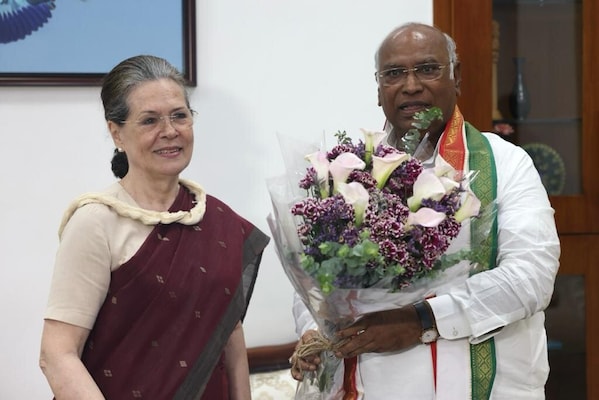 Congress veteran Mallikarjun Kharge will take over the reins of the party from Sonia Gandhi following an easy contest for the top post with underdog Shashi Tharoor. The 80-years-old leader’s tenure will begin at a difficult time for Congress as it is breathing for survival with the Bharatiya Janata Party’s juggernaut winning back to back elections from the states to the national level and regional parties securing its lost ground. READ MORE

Shashi Tharoor greets newly elected Congress President Mallikarjun Kharge at the latter’s residence, in New Delhi, Wednesday. Out of the total 9,385 votes, Kharge received 7,897 while his opponent, Shashi Tharoor garnered 1,072 votes. A total of 416 votes have been counted as invalid. (PTI Photo) Mallikarjun Kharge Will Take Charge as AICC Chief on October 26

'If You Are Irritated by Every Rub, How Will Your Mirror be Polished': Shashi Tharoor

What Were the 'Irregularities' That Shashi Tharoor's Election Team Flagged?

AICC headquarters on Monday In a statement, Tharoor said the final verdict has been in favour of Kharge. He also conveyed his congratulations to Kharge for his victory. “The decision of the party delegates is final and I accept it humbly. It is a privilege to be a member of a party that allows its workers to choose their president,” Tharoor said.

“Our new president is a party colleague and senior who brings ample leadership and experience to the table. Under his guidance, I am confident that we can all collectively take the party to new heights,” Tharoor said. Tharoor said the party owes an “irredeemable debt” to outgoing president Sonia Gandhi, for her quarter-century of leadership of the party and for being the anchor during our most crucial moments.

“Her decision to authorise this election process, which has given us new pathways to the future, is undoubtedly a fitting testament to her sagacity and vision for our party. I hope she continues to guide, motivate and inspire the party’s new leadership team in overcoming the challenges ahead,” Tharoor said. He also thanked former president Rahul Gandhi and Priyanka Gandhi Vadra for doing their own bit to support free and neutral elections.

“The Nehru-Gandhi family has held, and will always hold, a special place in the hearts of Congress party members and with good reason too,” he said. The results will be officially declared in a short while.

Kharge would be the first non-Gandhi president in 24 years.