A day after Delhi chief minister Arvind Kejriwal on Sunday gave a public assurance to IAS officers about their safety and security, the IAS association has said that it is ready for talks. In a statement, the association said it welcomes the statement and looks forward to concrete interventions. The statement signals a truce may be finally on the cards. Meanwhile, Delhi deputy chief minister Manish Sisodia had to be hospitalised as his ketone level rose to 7.4 as the indefinite strike at the L-G office entered the sixth day on Monday. A day earlier, Health Minister Satyendar Jain was admitted after his sugar levels dipped. Both the ministers along side Chief Minister Arvind Kejriwal have been holding a sit-in at the LG office demanding that Baijal direct IAS officers to end their "strike". They also demand that the Lt Governor approve the proposal for doorstep delivery of ration. In another development, the Delhi High Court asked the AAP government who authorised the sit-in by Delhi Chief Minister Arvind Kejriwal and some of his cabinet colleagues at the lieutenant governor's office and observed that strikes are usually held outside an establishment or office and not inside. The observation by a bench of Justices A K Chawla and Navin Chawla came during the hearing of two petitions, one against the sit-in by Aam Aadmi Party leader Kejriwal and the other against the alleged strike by the IAS officers of Delhi government. "Who authorised the strike/dharna (sit-in by Kejriwal)? You are sitting inside the LG's office. If it's a strike, it has to be outside the office," the court told lawyers appearing for the Delhi government in the two matters.

Tamil Nadu CPI(M) leader D Raja has hit out against the Delhi L-G and PM Modi saying, "This is the most unprecedented and arrogant display by the L-G and PM. The Congress being a pan-India party should have stood for democratic values. They should answer as to why they're not."

In his tweet, Rahul does not support the AAP in its protest, keeping in line with his party's stand, but does manage to take a dig at PM Modi.

"Delhi CM, sitting in Dharna at LG office. BJP sitting in Dharna at CM residence. Delhi bureaucrats addressing press conferences. PM turns a blind eye to the anarchy; rather nudges chaos & disorder. People of Delhi are the victims, as this drama plays out," tweets Rahul Gandhi:

PM turns a blind eye to the anarchy; rather nudges chaos & disorder.

People of Delhi are the victims, as this drama plays out.

Manish Sisodia tweets from the hospital replying to the IAS officers' association saying, "Thats precisely why we have been sitting at Raj Niwas for so many days requesting Hon’ble LG to call all stakeholders and end this impasse. Happy for discussions with our officers. Del govt committed to provide them safe n secure environment. However, LG is head of both “services” and “security”. So, meeting shud take place in his presence so that assurances related to those subjects cud be given (sic)."

Thats precisely why we have been sitting at Raj Niwas for so many days requesting Hon’ble LG to call all stakeholders and end this impasse. https://t.co/ozgaEMqKM8

Delhi Chief Minister Arvind Kejriwal called up Shiv Sena chief Uddhav Thackeray and apprised him about the situation in the national capital. Media advisor to Thackeray, Harshal Pradhan, said Kejriwal called Thackeray yesterday. "Uddhav ji feels that the duly-elected government by people of Delhi should be allowed to function sans any hindrance in its working," he said. "This, however, does not amount to the Shiv Sena, a key NDA constituent, supporting Kejriwal and the AAP," Pradhan said, dismissing media reports in this connection. Today, the AAP thanked the Shiv Sena and the Raj Thackeray-led Maharashtra Navnirman Sena (MNS) for supporting it against the "unprecedented murder of democracy" in Delhi. "It is a true statesmanship to stand up for democracy keeping aside differences," AAP spokesperson Preeti Sharma Menon said.

AAP leader Sanjay Singh has said that Manish Sisodia's Ketone levels are "alarming". "I have just met him and he has problems in breathing. He told me that we have to fight, the doctors are giving him all the medical support they need," said Singh.

A day after Delhi CM Arvind Kejriwal reached out to the IAS officers, calling them "family", the IAS officers' association has responded to the statement by welcoming it and tweeted, "Officers of GNTCD welcome Honourable CM's appeal. We reiterate that we continue to be at work with full dedication and vigour. We look forward to concrete interventions for our security and dignity. We are open to formal discussions with Honourable CM on this matter."

Arvind Kejriwal tweets saying Manish Sisodia is being shifted to a hospital.

"The type of movement Arvind Kejriwal has started is a unique one. Uddhav Thackeray had a conversation with him and said that Kejriwal has the right to work for Delhi," says Shiv Sena's Sanjay Raut.

The type of movement Arvind Kejriwal has started is a unique one. Uddhav Thackeray had a conversation with him & said that Kejriwal has the right to work for Delhi because they are the elected govt. Whatever is happening to them, it's not good for democracy:Sanjay Raut, Shiv Sena pic.twitter.com/HicE0nSDI5

"AAP national convener Arvind Kejriwal will take a decision on joint opposition deputy speaker support. But Congress should answer. They are hand in glove with the BJP and history will remember that they did not stand in support of democracy," says AAP's Sanjay Sinha, replying to CNN-News18's question.

"Now the onus is on IAS officers and L-G to also take step forward in the interest of Delhi's work. The signature campaign will begin tomorrow, and 10 lakh letters will be sent to PM Narendra Modi," Aam Aadmi Party spokesperson Sanjay Singh says. 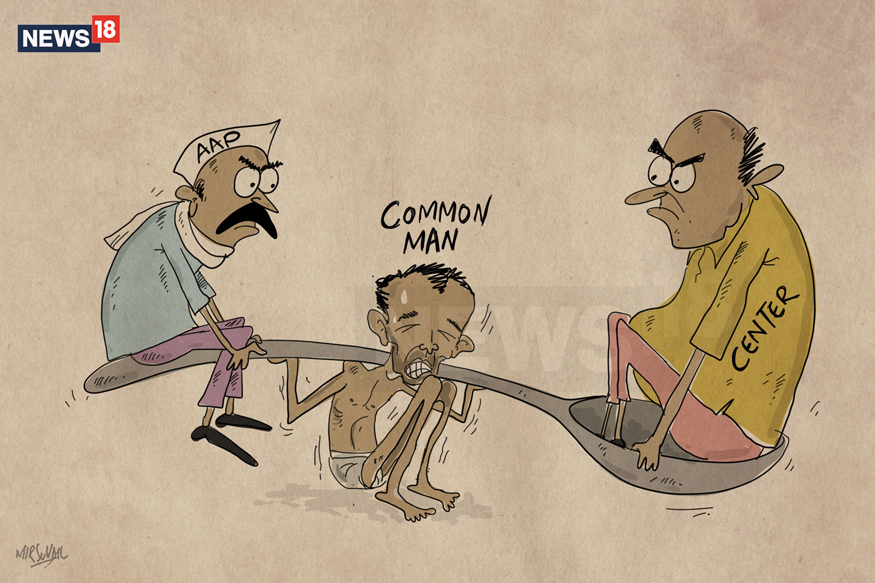 "We have shared over 50 letters about IAS officers skipping meetings. They themselves have admitted they skip meetings. If this isn't a strike, what is it? If IAS officers and L-G give a statement that they will start attending meetings, we will end the dharna. We have tried everything — from writing letters, appealing them in vidhan Sabha and sitting on a dharna," says Sanjay Singh.

Chief Minister Arvind Kejriwal himself has written to IAS officers yesterday, calling them family and assured them of their safety. But if IAS officers continue their strike, people of Delhi will not stay quiet as the national capital is already reeling under water scarcity and pollution," said AAP spokesperson Sanjay Singh.

"We stand by our colleagues in Delhi and demand safety and security of all IAS officers and Government officials," tweets IAS Association.

We stand by our colleagues in Delhi and demand safety and security of all IAS officers and Government officials. Threats and physical violence have no place in a civilised society. pic.twitter.com/W20fCS3WFS

BJP legislator Manjinder Singh Sirsa called Kejriwal's protest "nautanki". "We will pressurize Delhi CM to give water and electricity to everyone," he said, adding that he will send a contempt notice against Delhi speaker.

Delhi government lawyer says that IAS officers in yesterday’s press briefing have accepted that they are not attending meetings called upon by the ministers. "They are sitting INSIDE the LG’s Office. That is where the dharna is being held. How can you say it’s not at his office?," asks Delhi high court. Effectively, HC gives them more time to sort it out by themselves. Court has not issued any direction and notice to anyone IAS association has made the party in the matter. Earlier L-G Counsel (Aman Lekhi) said, "IAS comes under us. But the court made IAS association a separate party.

The condition of Delhi Health Minister Satyendar Jain, who was hospitalised late last night, is stable, a senior doctor today said. Jain, who had been on an indefinite hunger strike at the Lieutenant Governor office for nearly a week, was rushed to the LNJP Hospital after his health deteriorated. His Ketones level in urine was found high yesterday. "After hospitaliztion, his condition is stable," Medical Suprientenden of LNJP, J C Passey, said. Last night, Chief Minister Arvind Kejriwal confirmed that his colleague has been hospitalised. "Satyender Jain shifted to hospital due to his deteriorating health (sic)," he tweeted. Kejriwal, his deputy Manish Sisodia, Jain and Gopal Rai, have stayed put at the L-G office demanding that Lieutenant Governor Anil Baijal direct IAS officers to end what the AAP described as their "strike" and approve doorstep ration delivery scheme. 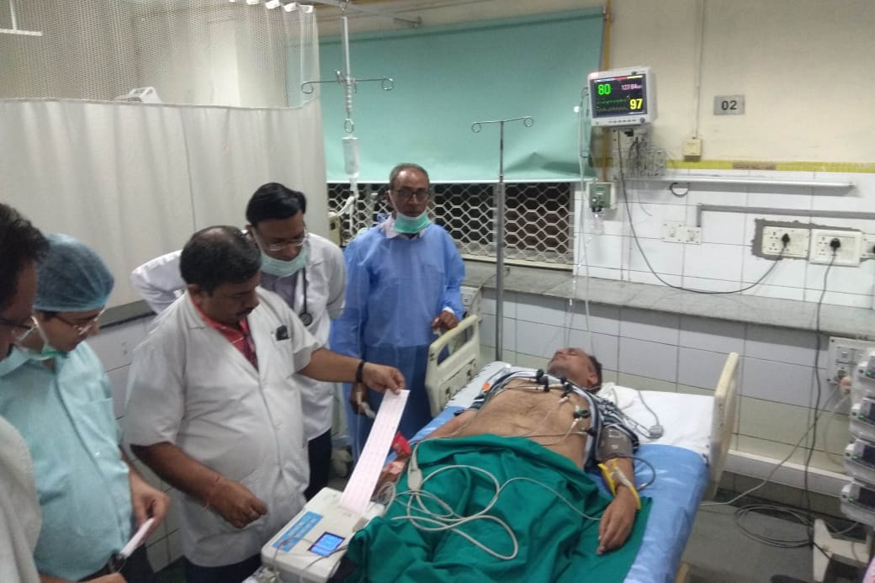 Delhi High Court tells government lawyer that Arvind Kejriwal's protest can’t be called a strike. "You can’t go inside someone’s office or house and hold a strike there," it said while adjourning the hearing till Friday.

Delhi Govt Lawyer: IAS officers yesterday accepted they are not attending meetings called by ministers
Delhi High Court: Thing is that you’re sitting on a dharna. Who authorized them to sit on a dharna like this?
Lawyer: It’s an individual decision.
Delhi HC: Is it authorized?

Is Delhi chief minister on strike or dharna, asks Delhi high court. Petitioner Hari Nath says that he can't tell if he is on dharna. “There is no specific definition of the word ‘dharna’ in legal terms,” he says. To this, the Delhi government lawyer says that it's neither a strike nor dharna. "The CM went to meet L-G Anil Baijal. Since he didn't meet, the CM was left with no other choice," the lawyer says.

Petitioner Hari Nath says that Delhi is facing water, power and health issues but Chief Minister Arvind Kejriwal is sitting on a dharna and is busy tweeting. He tells Delhi high court that orders must be immediately given to the chief minister to return to work.

Aam Aadmi Party to hold a key meeting at CM Arvind Kejriwal's residence at 12 pm. According to sources, the meeting will be regarding the signature campaign pertaining to IAS strike. After Kejriwal's letter to IAS officers, softening his stand, it's likely that the campaign would be on hold.

The Delhi High Court will today hear a plea seeking direction to the Lieutenant Governor (LG) to ensure that the alleged 'informal strike' by IAS officers of Delhi was called off and they perform their duties as public servants. The petition comes in the backdrop of another plea filed yesterday in the court seeking that the sit-in by Delhi Chief Minister Arvind Kejriwal and his cabinet colleagues at the LG office against the "strike" by the IAS officers be declared unconstitutional and illegal. This plea against Kejriwal's sit-in was also listed for hearing for June 18.

In the wake of "Arvind Kejriwal's failure to provide water" to residents of Delhi and against his "decision to sit on a hunger strike for political gains", a petition has been filed in Delhi high court, says BJP leader Vijendra Gupta. 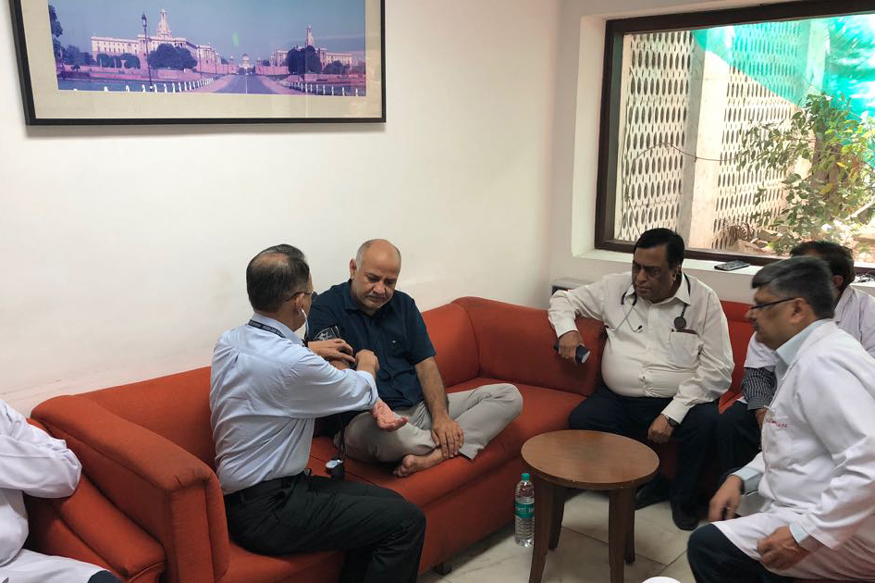 Meanwhile, the BJP is on a hunger strike against the AAP government since four days.

Union Minister Mukhtar Abbas Naqvi on Monday slammed Arvind Kejriwal, saying that when it comes to doing tasks, he is "zero", but when you talk of protests, he is a "hero".

'Karne mein zero, dharne mein hero, Karna kuch nahi dharna sab kuch' This is their mindset, it is destroying the trust people of Delhi had put in them: Mukhtar Abbas Naqvi,Union Minister on AAP protests. pic.twitter.com/jRIdyPYsh0

CLICK TO READ | IAS Officers Say Not on Strike, We Protest Against Kejriwal Govt for 5 Minutes Every Day 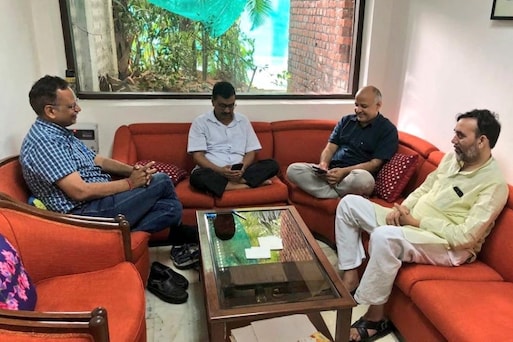 The IAS officers' association said they were worried about verbal assaults, threats, intimidation and attack on their dignity, respect.