The Nehru Memorial Museum and Library had recently hit the headlines after Congress opposed government’s idea of setting up a museum for all PMs in Teen Murti Bhavan complex. Former PM Manmohan Singh wants the complex to be left "undisturbed".

According to a report in The Indian Express, Singh stated that Jawaharlal Nehru belongs “not just to the Congress” but to the “entire nation”, and thus, the Teen Murti complex be left “undisturbed”.

The Nehru Memorial Museum and Library (NMML) had recently hit the headlines after the grand old party opposed government’s idea of setting up a museum for all prime ministers in the Teen Murti Bhavan complex.

Congress believes that introducing other PMs in the museum could detract from Nehru’s legacy, which includes his role in India’s freedom struggle. 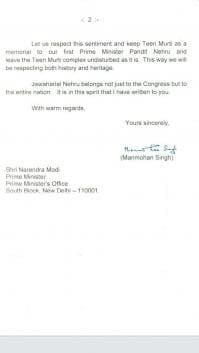 In the letter sent last week, Singh invoked former Prime Minister Atal Bihari Vajpayee and said that under Vajpayee’s six-year tenure as PM, “there was absolutely no attempt made to change the nature and character of the NMML and the Teen Murti complex in any way. But sadly, that seems to be part of the agenda of the Government of India now.”

Pointing out that “no amount of revisionism” can “obliterate” Nehru’s role and his contributions, the former PM quoted Vajpayee’s speech in Parliament when Nehru passed away.

“As Atal Bihari Vajpayeeji himself said in his moving speech to Parliament when Panditji passed away: ‘Such a resident may never grace Teen Murti again. That vibrant personality, that attitude of taking even the opposition along, that refined gentlemanliness, that greatness we may not again see in the near future. In spite of a difference of opinion we have nothing but respect for his great ideals, his integrity, his love for the country and his indomitable courage’,” he said.

Singh wrote that NMML is “dedicated to the memory of India’s first Prime Minister and prime architect of the Indian nation-state who left behind an indelible imprint on our country and indeed on the world.” On Nehru, he wrote: “His distinctiveness and greatness have been acknowledged even by his political opponents and rivals.”

Singh wrote that NMML “must remain a centre of first-rate scholarship and professional excellence. The museum itself must retain its primary focus on Jawaharlal Nehru and the freedom movement because of his unique role having spent almost ten years in jail between the early 1920s and mid-1940s. No amount of revisionism can obliterate that role and his contributions.”

The former PM had earlier written to President Ram Nath Kovind asking him to caution Narendra Modi from using ‘unwarranted, threatening and intimidating language’ against leaders of the Congress or any other party as it does not behove the position of the prime minister.

Referring to PM Modi’s speech in Hubli during campaigning for the Karnataka elections, where he warned Congress leaders against crossing the boundary or face a backlash, the letter said that such menacing and intimidating words might provoke breach of peace.