New Delhi: Congress spokesperson Randeep Singh Surjewala on Thursday criticised BJP candidate Pragya Thakur's remarks in which she described Mahatma Gandhi's assassin Nathuram Godse as "a patriot". "BJP leaders are describing the murderer of father of the nation as a true nationalist and declaring those who sacrificed their lives for the nation like Hemant Karkare as anti-nationals," he said.

Campaigning in nine West Bengal seats will end at 10 pm tonight after the Election Commission (EC) cut short campaigning for the last round of voting in the state. The EC's decision has been met with strong criticism from both the Congress and TMC that have called the move “unfair, unethical and politically biased.”

Tension prevailed at a public meeting of Makkal Needhi Maiam founder Kamal Haasan in Aravakurichi today after two unidentified persons allegedly hurled eggs and stones at the dais, police said. Meanwhile, police in Coimbatore district denied permission for the actor to undertake a campaign for the Sulur by-poll on Friday. No one was injured in the incident at Aravakurichi which happened when Haasan was getting off the stage after completing his address.

The Election Commission has announced re-polling in station no. 32 of Chandni Chowk Assembly Segment.

Delhi: Election Commission of India declares polls held on 12th May at polling station no. 32 of Chandni Chowk Assembly Segment as void. Re-poll to be held on 19th May.

CLICK TO READ | BJP, RSS Workers Guard Strongroom in Bhopal, Congress Vigilant Too Ahead of Counting The men change duties in shifts and keep monitoring the LED screens showing live footage of inside the strong room.

Priyanka Offers Namaz for Votes: Smriti Irani | Union minister Smriti Irani today said the Congress general secretary offered 'namaz' in Amethi "for votes" and then also visited Mahakal temple in Madhya Pradesh. "The Congress was so flustered in Amethi that its general secretary, after offering namaz for votes there, now visited the revered Mahakal temple in MP's Ujjain district," Irani said in a public meeting without naming Priyanka Gandhi Vadra.

BJP's Bhopal candidate Pragya Thakur has apologised for her remark on Nathuram Godse, hailing him as a patriot. On the backfoot, Pragya says she respects Mahatma Gandhi.

Kamal Nath Slams BJP over Godse Remark | Madhya Pradesh chief minister Kamal Nath slammed the BJP and its Bhopal candidate Pragya Thakur for he remarks of Nathuram Godse. "BJP is habitual of this, first they make a statement or comment and then refute it. Every citizen should recognise the flaws in the ideologies of BJP and its leaders. Judicial enquiry needs to be done against the person who insulted the father of the nation, Mahatma Gandhi. When BJP says that they have an alliance with few parties, then they should also accept the fact that they have an alliance with the election commission as well," he said.

CPI(M) General Secretary Sitaram Yechury today hit out at the BJP over its Bhopal Lok Sabha candidate Pragya Singh Thakur's remark that Mahatma Gandhi's assassin Nathuram Godse was a "patriot", alleging that the saffron party remains inspired by the killers of the Father of the Nation. "The truth about where RSS-BJP stands on terror gets clearer all the time. A senior minister in (Prime Minister Narendra) Modi's Cabinet said Godse was not a terrorist, now terror-accused Pragya Thakur calls the murderer of Gandhi ji a 'desh bhakt'. The BJP remains inspired by the killers of the Mahatma." Yechury said. Further, launching an attack on PM Modi for defending and endorsing Thakur's candidature, Owaisi said the BJP might soon recommend the Bharat Ratna for Gose, whom he referred to as "Independent India's first terrorist".

Priyanka Gandhi slams BJP and PM Modi over Pragya Thakur's remark on Nathuram Godse. "Distancing yourself from your candidate is not enough," she says.

Distancing yourself from your candidate is not enough. Nationalistic luminaries of the BJP, have the guts to spell out your stand.

Kolkata Police constitutes Special Investigation Team (SIT) for investigation into the vandalism of Ishwar Chandra Vidyasagar's statue at Vidyasagar College in Kolkata on 14th May. pic.twitter.com/iYt0KBNLPE

Election Commission of India has relieved Mithun Kumar Dey, SDPO Diamond Harbour (West Bengal) & Kaushik Das, Office In-Charge Amherst Street (West Bengal) from their office with immediate effect. Both the officers shall not be given any election-related posts.

Congress general secretary Priyanka Gandhi Vadra today had a dig at Prime Minister Narendra Modi's claim of a 56-inch chest, asking where his heart lies. "You boasted about your 56-inch chest, but where is your heart?" she asked at a public meeting in Maharajganj. The Congress leader also questioned claims of nationalism. "The PM talks about Pakistan while speaking on nationalism. For him, nationalism is all about speaking on the work done to counter Pakistan. Employment and farmer issues are not nationalism to him," she said.

Cong to Support UP Alliance Candidate | The Congress has announced its support to the SP-BSP-RLD alliance candidate Sanatan Pandey from the Ballia seat. "We will support SP candidate Pandey as we did not have our candidate here. Our objective is to ensure the defeat of the BJP candidate," Congress District president Sachidanand Tiwari told reporters. 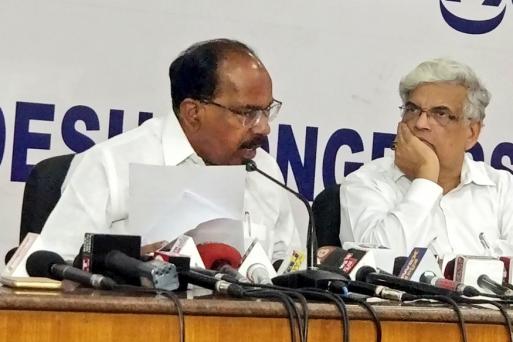 Moily said the third front experiments in the past with smaller parties heading the government -- whether it was led by V P Singh or Charan Singh or Chandrashekhar -- have been failures.

PM Modi says "This election will also be remembered by Didi's attitude towards democracy and the Constitution".

PM Modi addresses a public meeting Dum Dum, West Bengal saying "This is my last meeting in West Bengal in this election. For the last 2-3 days, I had the opportunity to communicate with millions of people from all corners of Bengal. The support West Bengal has given from its villages cities is unforgettable".

Election Commission of India declares polls held on 11th April at 5 polling stations of the Chandragiri Assembly constituency and the Chittoor Parliamentary constituency of Andhra Pradesh as void. Re-polls to be held on 19th May. pic.twitter.com/uXsNnzCpMv

Bringing monorail to ease traffic congestion and develop the city as a tourism and IT hub are some of the poll promises made by the BJP's Chandigarh unit in its manifesto released today. The manifesto was launched by the BJP's Chandigarh unit chief, Sanjay Tandon, and party candidate Kirron Kher. The party has proposed to develop the city as a hub of tourism, education and IT, providing free wi-fi in all markets, removing dumping grounds from Daddu Majra and getting electricity wires underground. The Telugu Desam Party (TDP) chief said it was disturbing to see prompt action by the EC on a complaint by the BJP and its President Amit Shah in West Bengal while conveniently ignoring the complaints of the Trinamool Congress.

Prime Minister Narendra Modi at a public meeting in Mathurapur, West Bengal today asserted that the West Bengal Police, in connivance with the state government, was trying to wipe out evidence of statue desecration in Kolkata. "It was the TMC goons who were involved in vandalism. They were the ones to desecrate the bust of Ishwar Chandra Vidyasagar. The police officers are trying to wipe out evidence of the incident to protect the TMC goons. The TMC and their goons have made Bengal a hell," he claimed.

Congress Delegation Meets EC | A delegation from the Congress party met the EC today. "The first issue we raised was about West Bengal. The Election Commission without any quasi-judicial process took the decision to increase the silence period by 24 hrs. If this violence has been done by BJP then why others suffer for it. We reserve the right to all remedies including going to court," Abhishek Manu Singhvi of the Congress party, who was part of the delegation said.

Trinamool Congress chief Mamata Banerjee took a hit at PM Modi saying that he cannot restore a heritage but may be able to rebuild statues.

Modi babu can rebuild a statue, but can he restore 200-year old heritage: @MamataOfficial at Mathurapur

The Mizoram unit of the BJP today organised a sit-in demonstration here to protest against what it called was "violation of democracy" by the Trinamool Congress in West Bengal. Carrying placards which read 'Save Democracy, Save Bengal', the BJP workers raised slogans against the TMC government, alleging that the Mamata Banerjee-led party obstructed poll campaigns by Amit Shah and Yogi Adityanath. 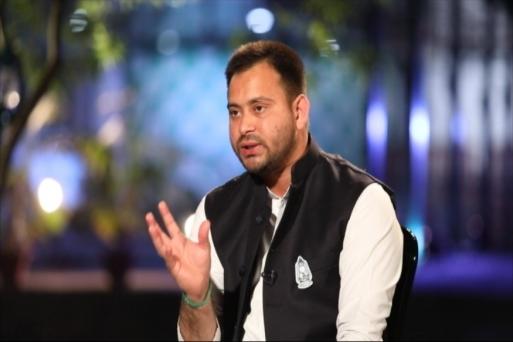 Yadav, the younger son of RJD supremo Lalu Prasad, also expressed confidence that a coalition of progressive parties will come together to form the government at the Centre.

"Didi is trembling with fear at the likelihood of defeat. In the morning, I was threatened to be put behind bars. A threat was made to capture the BJP office," Narendra Modi claims at a rally in West Bengal's Mathurapur, where campaigning will be barred from 10 pm today.


The move forced Chief Minister Mamata Banerjee to reschedule her rallies which will now take place today in Mathurapur, Diamond Harbour, Behala and Kolkata. PM Modi will hold two rallies in the state – in Dum dum and Laxmikantpur.

Banerjee on Wednesday alleged that the EC gave Prime Minister Narendra Modi time to finish his two rallies before implementing the campaign ban that kicks off tonight. Congress, too, called the decision a “shameful fall for a once-independent constitutional body”.

The sharp reactions came after the poll body took unprecedented steps by invoking Article 324 of the Constitution to curtail the campaign period and transferred key officials after the latest round of poll-related violence in the state.

Meanwhile, actor-politician Kamal Haasan, who has found himself at the centre of a raging controversy over his “free India’s first extremist was a Hindu” remark, on Wednesday said he had only spoken about what was a ‘historic truth’ and did not use the term ‘terrorist’. He asked if his critics could show instances of his remarks that could incite violence and said the accusations against him had hurt him.