The Congress today questioned the decision of the Election Commission to suspend a high-ranking poll official deputed to Odisha for allegedly checking the prime minister's chopper and said EC rules "do not exempt" PM's vehicle from being checked. Senior Congress leader Ahmed Patel took to Twitter to ask if SPC protectees of the grand old party could be subjected to inspection, why the same rule could not be applied to the BJP.

EC to submits its report on Modi biopic to SC on Friday | The Election Commission will on April 19 submit its decision to the Supreme Court on whether the ban on the biopic on Prime Minister Narendra Modi should continue, a senior poll body official said Thursday. The EC, on the apex court's directions, had watched the film on Wednesday. Senior Deputy Election Commissioner Umesh Sinha said the EC will on Friday submit to the Supreme Court its view on banning the film's pan-India release in a sealed cover.

Canvassing votes for BJP candidates here at a rally on Thursday night, he wanted to know why Gandhi was not contesting from either Thiruvanathapuram or Pathanamthitta constituencies in the state.

North East, Bengal, Odisha Will be 'Biggest Surprises' This Elections: Jaitley | Finance Minister Arun Jaitley Thursday said North East, Bengal and Odisha will be the "biggest surprises" of this Lok Sabha polls, with the first two rounds of voting clearly showing an upsurge in favour of Prime Minister Narendra Modi. Meanwhile, a high voter turnout was witnessed in the second phase of Lok Sabha elections on Thursday covering 95 constituencies in 11 states and union territory Puducherry. As many as 91 constituencies went to polls in the first phase on April 11. "After the first two rounds of voting, the upsurge in favour of PM Shri @narendramodi and the NDA is clearly evident," Jaitley tweeted.

North East, Bengal and Odisha will be the biggest surprises of this Lok Sabha election.

PMModi alleged opposition parties use emotions 4 votes.But it is Mr.Modi himself who is playing with the emotions of people inthe name of religion& terrorism.Had he been confident of his devlpmnt work to bring in votes Y would he resort to propaganda movie&TV channel in his name? Mahanta, who is the founding member of the Asom Gana Parishad that has allied with the BJP ahead of the election, visited several areas in his constituency during the day and urged his supporters to cast 'conscious' votes.

A police gun accidentally misfired in PM Narendra Modi's campaign venue in Thiruvananthapuram, Kerela today. The incident occurred in Central Stadium where thousands have thronged to catch a glimpse of PM Modi. Nobody is injured in the incident. He was immediately shifted from the place. Police have started an informal investigation into the matter.

BJP Lok Sabha candidate from Bhopal Sadhvi Pragya Singh Thakur, facing trial in the Malegaon bomb blast case, Thursday broke down while narrating how she was "tortured" while in custody of the police. Thakur (48) also set the tone for her high-profile poll battle in Bhopal againt Congress candidate Digvijay Singh, whom she accused of using words like "Hindu" and "saffron" terror". Shatrughan Sinha's presence at the road show triggered off a controversy. He had joined the Congress on April 6 while the roadshow was essentially a Samajwadi Party show.

PM Modi in Thiruvananthapuram, Kerala: Congress' 'Naamdaar' says he is contesting from Wayanad because he wanted to send a message to South India. Couldn't you contest from Trivandrum to give the message? It's the capital. It's not a message to South but a message of appeasement politics. PM Narendra Modi in Thiruvananthapuram, Kerala: These elections will determine if India will make rules or just follow them. So there is a huge responsibility on the shoulders of voters of Kerala, especially first-time voters.

UP election commission sends Rahul Gandhi's Amethi's press meet video to CEC. In the video, Rahul Gandhi after filing his nomination refers to SC judgement on Rafale and said 'chowkidar chor hai'. The CEC is going to investigate the video. CPI-M-led LDF holds road show in Wayanad | A day after Congress chief Rahul Gandhi campaigned at Wayanad, from where he is contesting besides his stronghold Amethi, the ruling CPI(M)-led LDF held a massive road show at Sulthan Bathery here led by party general secretary Sitaram Yechury. LDF candidate P P Suneer and Kerala health minister K K Shylaja were also present in the open jeep along with Yechury who was wearing a red hat and waving to the crowd. Addressing the rally, Yechury said the support of Left parties were necessary to form a secular government at the Centre.

The Maharashtra unit of the BJP on Thursday announced expulsion of four party leaders who are contesting the Lok Sabha election against official candidates of the BJP or its allies in the state. Bhausaheb Wakchaure, Anil Gote, Manikrao Kokate and Suhas Natavadkar were expelled for violating the party discipline, a BJP source said.

Huge Crowd Greets BJP's Gorakhpur Candidate Ravi Kishan | Bhojpuri actor Ravi Kishan, fighting for the Gorakhpur Lok Sabha seat, Thursday began his campaign, claiming he will win the poll with Baba Gorakhnath's blessing Kishan launched his campaign with a roadshow which he started from Gorakhnath Temple after paying his obeisance there with a huge crowd cheering him. "Ee Modi ji ke tsunami ba" (It's a Modi wave). We will win more than 73 seats. With the blessings of Baba Gorakshnath, I will win from Gorakhpur with a record margin," he told reporters on the sidelines of his roadshow. Mahanta, who is the founding member of the Asom Gana Parishad that has allied with the BJP ahead of the election, visited several areas in his constituency during the day and urged his supporters to cast 'conscious' votes.

Union minister Nitin Gadkari on Thursday attacked the Congress on Thursday saying the party has been making false promises of eradicating poverty for four generations since the time of Jawaharlal Nehru. The senior BJP leader also asserted that only Prime Minister Narendra Modi can keep the country safe by crushing terrorism and also ensure speedy development and end woes of the poor.

CLICK TO READ | Youths Want to Study But Some People Want Them to Make 'Pakodas', Says Kanhaiya Kumar AAP Candidate Balbir Singh Jakhar's Affidavit Found 'Incomplete' by Poll Officer | AAP's West Delhi candidate Balbir Singh Jakhar's affidavit was found to be incomplete by district election officer Thursday. Jakhar, who is making his electoral debut, was among the 36 candidates who filed their nominations Thursday for the Lok Sabha polls. He has declared movable and immovable assets worth over Rs 3.28 crore.  An advocate, Jakhar, has shown an income of Rs 9,78,458 in his last year's income tax return, while his wife, Anju Jakhar, a government servant, has shown an income of Rs 15,23,293 during the same period, according to the affidavit. He has declared movable assets worth Rs 1,85,25,444.05 which include deposits and cash possessed by him, his wife and his dependents.

CLICK TO READ | After May 23, Modi Will Become PM Again and BJP Will Come to Power in Odisha, Says Jay Panda 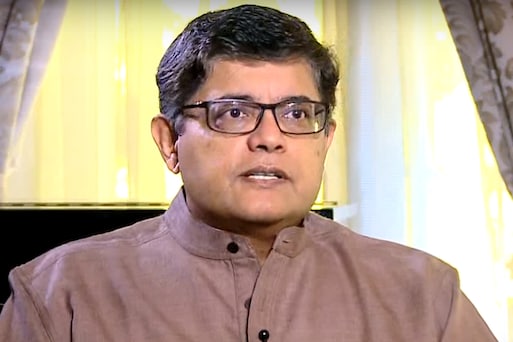 The BJP leader said he had no bitterness towards Naveen Patnaik, whose comments about him made the Odisha chief minister appear like a school boy rather than a seasoned politician.

Naveen Patnaik: In five states, BJP's ‘double engine’ has fused. On 23rd May, BJP's main engine will also get fused. This is the reason why they are losing their minds.

GVL Narsimha Rao shoe attacker update: After joint interrogation, the shoe attacker has been let off. According to sources, no incriminating evidence has been found. Also, no complaint was received against him. According to Dharmendra Pradhan, BJP is going to win big in Odisha this time due to PM Modi's 'pro-poor' policies, aided by Naveen Patnaik's 'corrupt government that has been outsourced to mining mafias'.

Rajasthan chief minister Ashok Gehlot on Thursday said India is positioned to be a 'superpower' due to the work done by successive Congress governments and accused Prime Minister Narendra Modi of misleading youths on the issue. He said the prime minister is "misleading" the new generation who are not aware of the contribution of the Congress governments. "India is positioned to be a superpower and this could be possible because of the Congress. Modi should tell people what his government has done in five years instead of misleading people. He is doing politics in the name of Army," Gehlot said at a public rally here.  "... Modi is targeting youths through social media. He is misleading them and the social media is being misused," he said. AIMIM chief Asaduddin Owaisi in Aurangabad, Maharashtra: PM Modi is the king of liars. If Modi wanted to fight terrorism, he would not have made a person with terrorism charges a candidate.

Biopic on Modi a Joke as he Didn't Fulfil Promises: Urmila | Actor Urmila Matondkar, who is contesting the Lok Sabha election as a Congress candidate from Mumbai North, Thursday said the biopic made on Prime Minister Narendra Modi was a joke as he has failed to fulfil his promises.


The Congress accused the EC of "bias" after it suspended Karnataka cadre IAS officer Mohammed Mohsin for what the poll panel said was "dereliction of duty" with regard to "SPG protectees". The Congress also wondered what Modi was carrying in his helicopter that he did not want India to see. According to an EC order, IAS officer Mohsin was suspended for "actions contrary to the instructions of the Commission concerning SPG protectees" on April 16 the day SPG-protectee Prime Minister Modi visited Sambalpur in Odisha to address an election rally.

Meanwhile, newly inducted BJP member and Malegaon blast accused Sadhvi Pragya Singh Thakur today hit out at the Opposition for questioning her candidature from Bhopal and asked why the colour saffron was associated with terror. “Tomorrow they can link terror with Muslims, Christians, men and women; saffron is the colour of our flag. They have tried their best to break me but I have and always will work for the country,” she said, adding that she would be filing her nomination on April 23.

Thakur’s candidature has given fresh ammunition to the Opposition. Former Jammu and Kashmir chief minister Omar Abdullah also hit out at the BJP over its decision to field the blast accused, asking that if Thakur could not stay in prison due to her health condition, how could she campaign for the Lok Sabha election.

In a dramatic turn of events, a Kanpur doctor hurled a shoe at BJP MP GVL Narasimha Rao while he was addressing a press conference to defend Thakur’s candidature. The doctor, who was immediately overpowered and detained, identified himself as Shakti Bhargava, sources said. The police, however, were yet to officially confirm his identity.

Meanwhile, Prime Minister Narendra Modi and Congress chief Rahul Gandhi battled it out on the former’s home turf Gujarat today as 95 seats across 11 states and a Union Territory vote in Phase 2 of the Lok Sabha elections.

Voting for Phase 2 of the Lok Sabha elections began today with 95 seats across 11 states and one in the Union Territory of Puducherry. The elections are being held in the shadow of multiple Income Tax raids, with the department saying a cash-for-votes scam was being run in Tamil Nadu. Elections in 38 Lok Sabha and 18 assembly seats of the state are being held, though polling in the Vellore seat has been cancelled following huge cash haul by Income Tax officials. Elections are also being held in 35 assembly constituencies in Odisha.