Lok Sabha Elections 2019 LIVE: A day after verbal duel between united Opposition and BJP leaders over PM's 'corrupt no. 1' statement at Rajiv Gandhi, Prime Minister Narendra Modi reiterated his stand and dared Congress to fight polls in the former prime minister's name in Delhi, Madhya Pradesh and Punjab when they vote in the sixth phase.

Union minister and Smriti Irani hit out at Rahul Gandhi after he called off his Amethi visit. Irani said she had never expected that the Congress president would become so "proudy" that he would not visit his constituency on the day of voting. 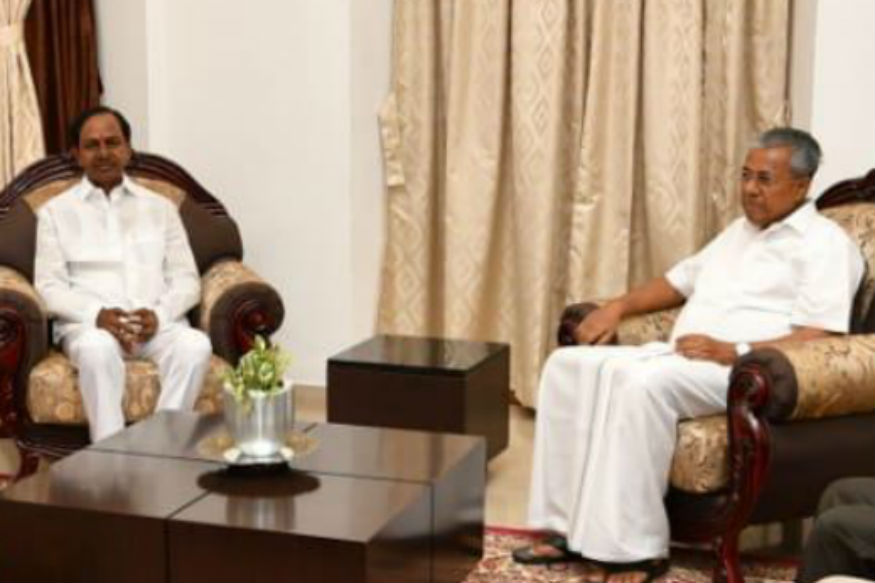 CLICK TO READ | 'Where Did 'Bua' Come From?' Yogi Adityanath Tries to Solve 'Relationship Puzzle' of Yadav Family 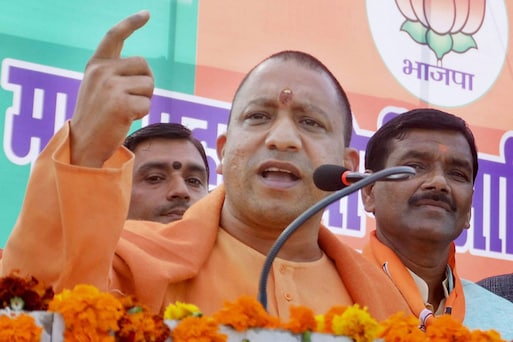 Mocking SP-BSP alliance, Yogi Adityanath said that Shivpal Yadav says that he has no sister. So, where did the 'bua' (aunt) come from? he asked. Earlier, People Got Electricity on Eid, But Not on Diwali: Adityanath |Chief Minister Yogi Adityanath alleged on Monday that during earlier governments in Uttar Pradesh, people got electricity on Muharram and Eid, but not on Holi and Diwali. Addressing a public meeting in Domariaganj constituency in Siddharth Nagar district, Adityanath said the situation was different now, saying Prime Minister Narendra Modi believed in 'sabka saath, sabka vikas' (support for all, development for all). "Earlier, power connections were given on caste lines and people didn't get electricity on Holi and Diwali, but on Muharram and Eid," the Bharatiya Janata Party (BJP) leader said.

Rahul Gandhi: When there were alliance talks in Delhi, I told Arvind Kejriwal that we want to fight on three seats and you can fight on four. As soon as I said yes for this arrangement, Kejriwal did a U-Turn and asked for Haryana and Punjab as well.

Rahul Gandhi: Modi ji despite being the PM insults another martyr. No matter whatever grudge you have on me, my mother, father, grandfather and grandmother, there is only love in my heart for you.

Despite Being Union Min, Harsimrat Did Nothing for Punjab: Amarinder Singh | Punjab Chief Minister Amarinder Singh Monday slammed Union minister Harsimrat Kaur Badal, accusing her of doing "nothing" for the state despite being a part of the Centre. Hitting back at the Punjab chief minister, Harsimrat Kaur Badal asked why welfare schemes initiated by the previous SAD government had allegedly been stopped by the current Congress regime.

CLICK TO READ | Modi Has a Good Figure, Want it to Get Better: Mamata Banerjee' Deadpan Humour at Poll Rally 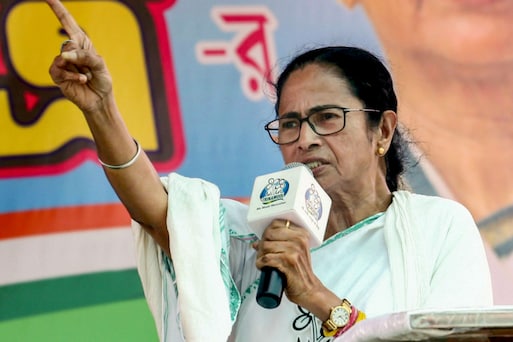 The West Bengal CM, who is known for pulling no punches against her political adversaries, said that Modi has now given up being a chaiwala to become a chowkidar.

BJP Complains to EC Against Akhilesh Over Children in Campaign | The BJP lodged a complaint against Samajwadi Party chief Akhilesh Yadav on Monday for allegedly deploying two minor boys for campaigning in Uttar Pradesh's Balrampur district. In a statement, state BJP vice-president J P S Rathore said the complaint had been submitted to the state chief electoral officer that Yadav had deployed two minor boys, which on whose bodies campaign material of the SP and the Bahujan Samaj Party was written. 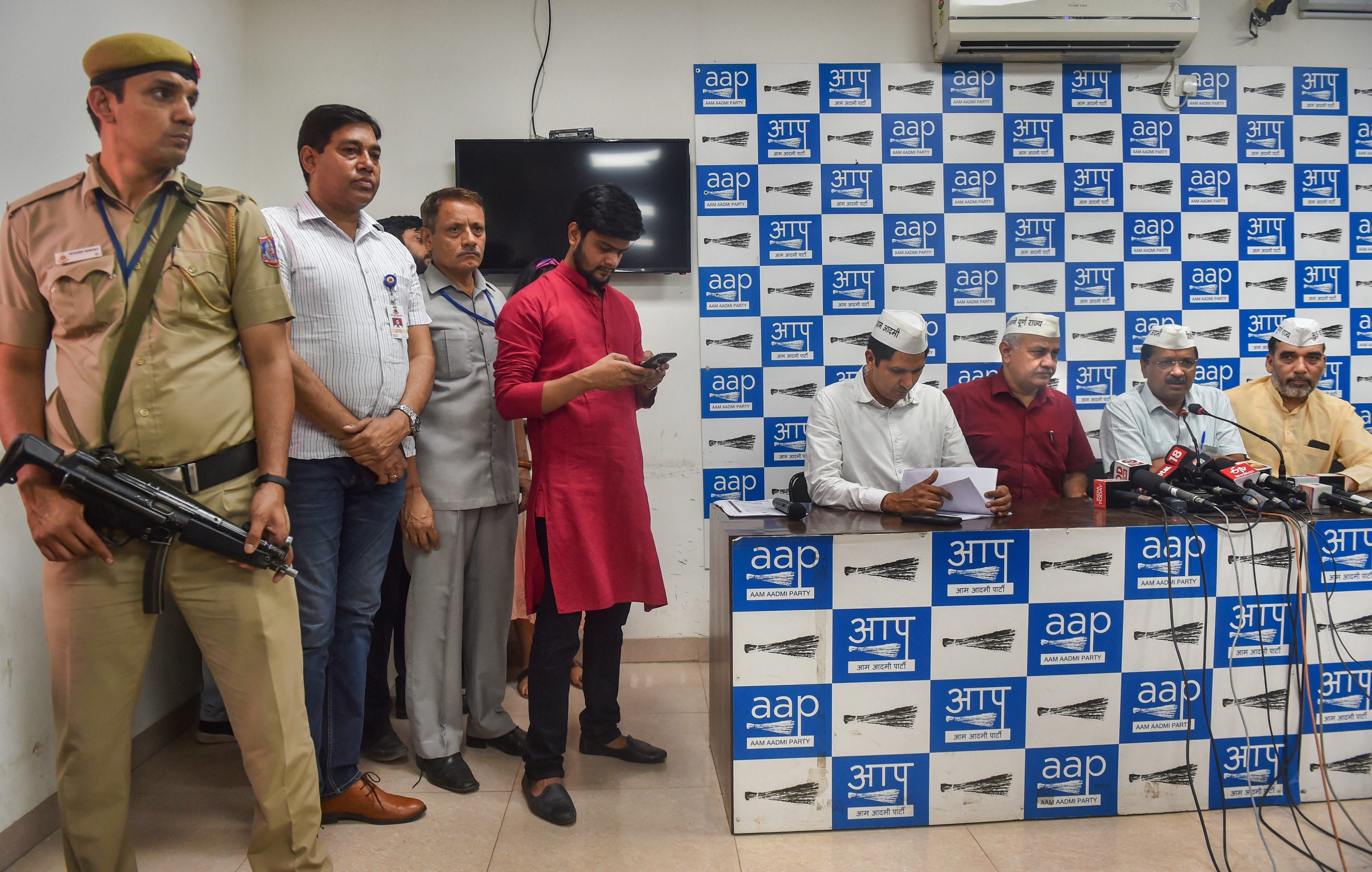 Former Maharashtra deputy chief minister and NCP leader Chhagan Bhujbal will campaign for Congress candidate Digvijaya Singh, who is pitted against BJP's Pragya Singh Thakur in the Bhopal Lok Sabha seat, the NCP said Monday. Bhujbal will be in Bhopal Tuesday to address a couple of election rallies in support of Singh, a former Madhya Pradesh chief minister, the Sharad Pawar-led party said in a release here.

BJP Trying to Force Everybody to Chant 'Jai Shri Ram': Mamata | Trinamool Congress supremo and West Bengal Chief Minister Mamata Banerjee Monday said that 'Jai Shri Ram' is the BJP's slogan and it is trying to force everybody to chant it. "Does Ramchandra become BJP's election agent when election comes?" the fiery TMC supremo asked at public rallies here.

Modi Trying to Take Personal Credit for Balakot Strike, Says Amarinder |  Punjab Chief Minister Amarinder Singh on Monday accused Prime Minister Narendra Modi of trying to take personal credit for the action of the armed forces and said "surgical strike" was just a new jargon for cross-border raids. "Modi is trying to take personal credit for the Balakot air strike... The prime minister had not done anything, said Singh. Was he (Modi) there in 1965, 1975 or Kargil," asked the CM, pointing out that it was former prime minister Indira Gandhi who did 'tukdas' (division) of Pakistan by breaking it into two in 1971 and gave full credit to the Indian Army and Field Marshal SHFJ Manekshaw. Gandhi had attributed the victory to the valour of the Army, which is what Modi should have done now, he added. Surgical strike was just a new jargon, a 'jumla', like the others the BJP had come out with, for cross-border raids which had been happening for the past 70 years, he said. Modi was simply trying to usurp the courageous acts of the defence services, he said, adding that it was the India's Army and nobody's "personal possession". 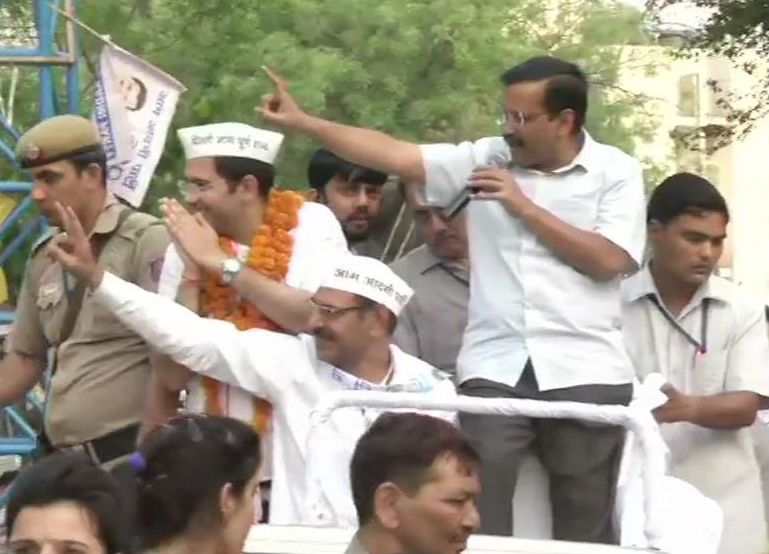 Amit Shah in Siwan: There were only two countries in the world who take revenge for the blood of their soldiers. One was America and the other was Israel. Now, PM Modi has helped India get added in the list too.

Amit Shah in Siwan: In last five years, PM Narendra Modi has tried to change the fate of villages and the poor with your blessings. The government has worked for more than 70 million poor mothers to ensure gas stoves reached their kitchens.

West Bengal: BJP candidate from Hooghly Lok Sabha, Locket Chatterjee sat on a dharna on Monday at the Hoogly DM’s office after her car was allegedly attacked in Dhaniakhali by TMC goons. 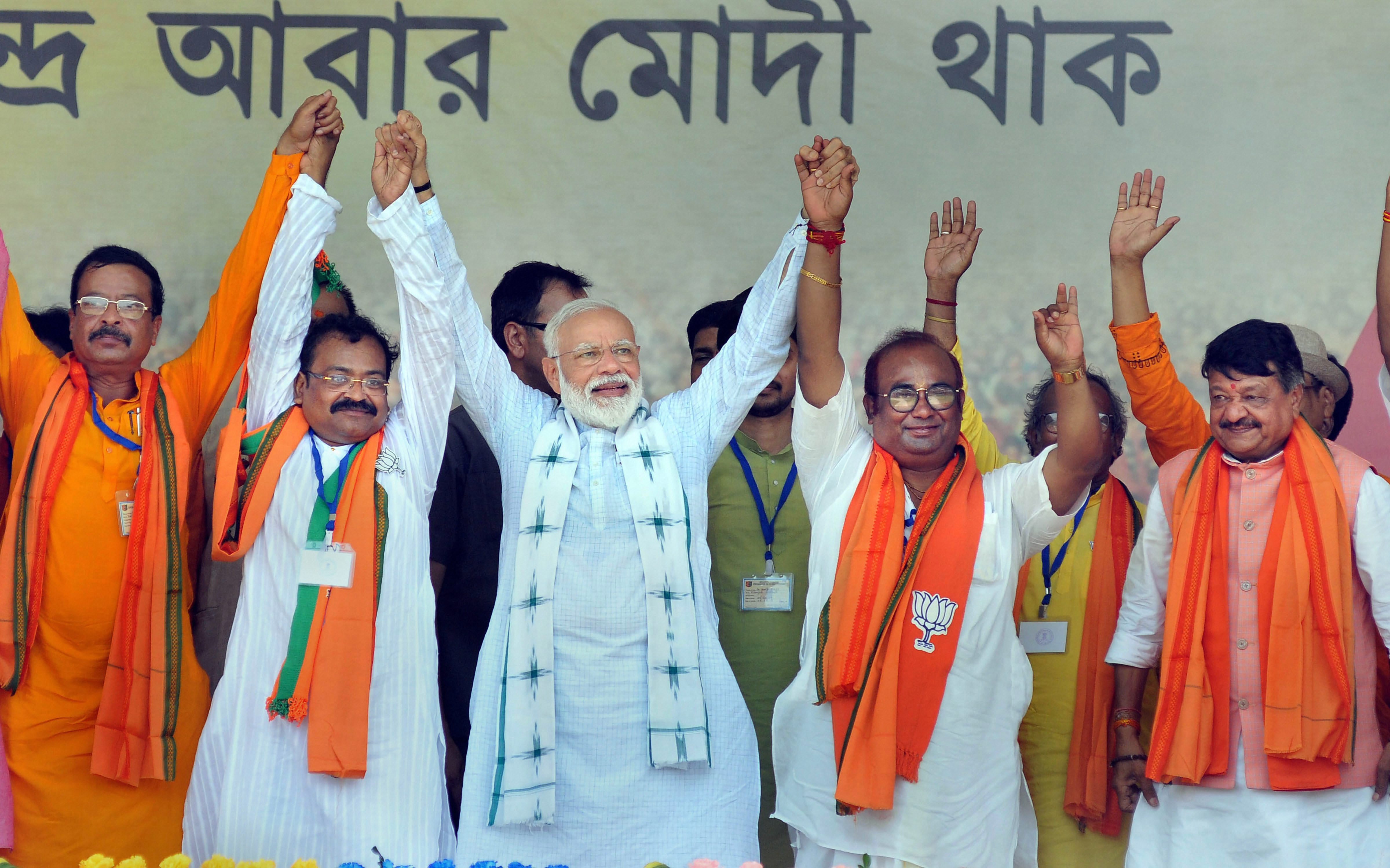 PM Modi Utters Untruths to Sharpen Communal polarisation: Yechury | CPI(M) general secretary Sitaram Yechury said on Monday that Prime Minister Narendra Modi "uttered untruths" to sharpen communal polarisation. PM Modi at an election rally in West Bengal's Jhargram slammed Yechury for his "derogatory" remarks against Ramayana and Mahabharata. "As is his wont, Modi distorted what was said in Bhopal where BJP has fielded a terror-accused. Like terror knows no religion, violent people can be found in all groups. Even epics Ramayana & Mahabharata speak of such people. To sharpen communal polarisation, Modi utters untruths," Yechury tweeted.

There Will be Political Ups and Downs After LS Poll Results, Says Yeddyurappa | Indicating that the stability of the ruling coalition in Karnataka depended on the stand taken by disgruntled Congress legislators, state BJP chief B S Yeddyurappa said Monday there will be "political ups and downs" after the general election results are declared on May 23. He ruled out any possibility of his party's alliance with the JD(S), if such a situation were to arise. The former chief minister, however, said that those in BJP were not "political sanyasis." Yeddyurappa said it was too early to speak about the stability of the state government.

Mamata Banerjee: 'Expiry Prime Minister' is indulging in politics before elections. If you did not come here for a political election rally, I would have gone to meet you. I do not consider you the PM anymore. I will talk to the new Prime Minister.

PM Modi: The policy of Congress has allowed the roots of terrorism to be strengthened in the country. The opposition parties want to make life easier for Naxalites.

PM Modi: Five years ago, Jharkhand was discussed for coal scam, political instability and for Naxalite attacks. Today, the discussion of Jharkhand is being strengthened for the women empowerment in village to village, for the well-being and for the strength of our sisters.

PM Modi:  I do not claim that I have ended all the injustices committed in 70 years of Congress. But I have certainly succeeded in reducing that injustice. Congress has given the country the biggest coal scam in India's history.

After attacking Congress president Rahul Gandhi by saying that his father Rajiv Gandhi died as ‘Corrupt no 1’, PM Narendra Modi on Monday challenged the Congress to fight the next phase of Lok Sabha elections in the name of Rajiv Gandhi. “I hope the Congress will accept this challenge,” he said. Earlier on Saturday, Modi said, “Your father was termed Mr Clean by his courtiers, but his life ended as bhrashtachari no 1," referring to Bofors scandal in which Rajiv Gandhi had been implicated

Lok Sabha Elections 2019 LIVE: A day after verbal duel between united Opposition and BJP leaders over PM's 'corrupt no. 1' statement at Rajiv Gandhi, Prime Minister Narendra Modi reiterated his stand and dared Congress to fight polls in the former prime minister's name in Delhi, Madhya Pradesh and Punjab when it votes in the sixth phase.


Congress president Rahul Gandhi launched a scathing attack on Prime Minister Narendra Modi today, accusing him of politicising the armed forces. Gandhi, who was addressing a rally in Bhiwani, said he would rather die than use the army for electoral gains.

Gandhi equated the Prime Minister with a boxer, saying he was supposed to fight unemployment, farmers’ issues, and corruption but “he instead turned around and punched his coach Advani ji, his team Gadkari ji and Jaitley ji, then went into the crowd and punched small traders and farmers”.

Modi, who conducted an aerial survey of cyclone-hit Odisha today and praised CM Naveen Patnaik’s efforts, said the entire country stood with West Bengal but Banerjee was letting her “arrogance” come in the way of relief measures.

Returning the fire, Banerjee said the meeting was drama for publicity and sympathy, and asked why she should meet him if he is there to hold a political rally.
“How dare you call for a meeting with chief secretary and senior officials without the CM. Don’t do this drama in Bengal. Mr Expiry PM, you are not worthy of (being) PM. We don't want your sympathy,” she said.

Banerjee said the Bengal government was only asked to attend the meeting after the PM landed in Kalaikunda. “As if we are servants,” she said.