Election Tracker LIVE: Union health minister JP Nadda has released another list of BJP candidates. Addressing a press conference, Nadda said that senior leader Uma Bharti has told the CEC that she is "not interested" in contesting elections this time. The party has decided to give her charge of BJP's vice president. Meanwhile, popular stage performer from Haryana, Sapna Chaudhary, joined Congress. However, as speculated earlier, she will not fight polls against Hema Malini in Mathura, which has dominant Jat presence. The grand old party, late at night, announced to field Mahesh Pathak from the west UP city.

With the announcement of 48 contenders from Goa, MP, Jharkhand, Gujarat, Himachal Pradesh, and Karnataka, the party has so far fielded 286 leaders for Lok Sabha polls. On the news of Congress chief Rahul Gandhi contesting from Kerala, Chief Minister Pinarayi Vijayan said, "Rahul Gandhi is not coming to Kerala to take on the BJP...he will be fighting the elections against CPI(M)...Congress should have a look and consider the national politics, what message are they sending to the country?"

CLICK TO READ | Smriti Irani Takes a Dig at 'Rahul from Kerala' Demand, Congress Taunts Her Over MP Post Despite Twin Debacle Congress leaders from down South have been persistently inviting Rahul Gandhi. While Dinesh Gundu Rao asked Gandhi to contest from Karnataka, the Kerala Congress has been trying to convince him to fight from Wayanad. AICC released candidates list for the upcoming Assembly elections in Arunachal Pradesh and Sikkim, which would be held along with the Lok Sabha polls. Ram Prasad Sarmah, who has been with the BJP for almost three decades, had accused "new intruders" in the party of neglecting long-time workers.

Dancer and actor Sapna Chaudhary today joined the Congress party. She is likely to contest from Mathura constituency against Hema Malini who will contest on BJP ticket. BJP declares the sixth list of 48 candidates for the upcoming elections. Jayant Sinha will contest from Hazaribagh, Arjun Munda from Khunti, Vidhyut Varan Mahatao from Jamshedpur and Pashupati Nath Singh from Dhanbad. The party has also declared six names for the assembly elections in Goa and Gujarat. 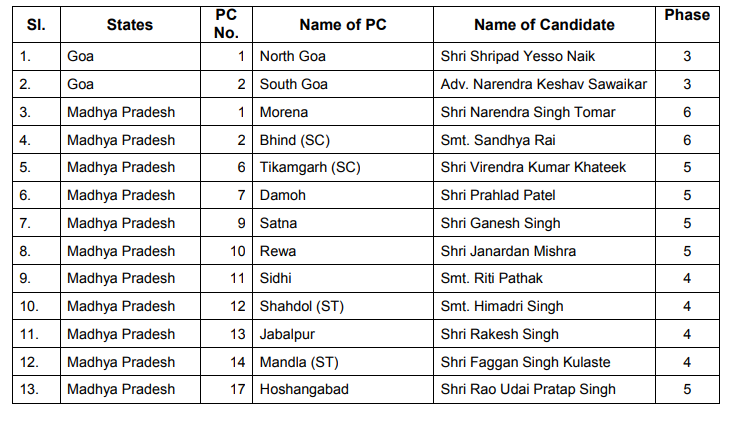 Last week, Gowda had said that he is yet to decide if he would be fighting the elections and had been thinking about his 'usefulness' in the national capital.

Union minister Smriti Irani takes on Rahul Gandhi over the news of him contesting from Kerala.

Union minister Smriti Irani takes on Rahul Gandhi over the news of him contesting from Kerala.

Mehbooba Mufti says, "We will not be placing any of our candidates in Jammu and Udhampur...We don't want the votes in these seats to be divided..we want the secular parties to consolidate in these regions."

The party will come out with a list of candidates after the CEC. I don't know anything about differences: Congress leader Jitin Prasada

#WATCH Congress leader Jitin Prasada on being asked 'from where he will contest the Lok Sabha elections': These are all speculation, party will come out with a list of candidates after the CEC. I don't know anything about differences. pic.twitter.com/XztM4a1Iq5

Mehbooba Mufti said she will contest from Anantnag. Slamming the BJP, Mufti also said, “With a call for a ban against separatists the government is inciting people to go towards violence...they are pushing people into a corner...BJP is trying to create a perception of strength across the country by isolating Jammu and Kashmir.”

Congress spokesperson Randeep Surjewala on request to Rahul Gandhi to contest from south, “Southern state PCC’s, lakhs of Congress workers & people of Karnataka, Tamilnadu & Kerala have urged Sh Rahul Gandhi to contest Loksabha from these states. INC is indebted for the affection & blessings. Their sentiments are deeply valued & respected. Party will take a decision.” Shashi Tharoor: If Rahul Gandhi contests from Kerala it will a huge morale booster for our workers...with him contesting from Kerala we can be sure of the fact that UDF will win all 20 seats in Kerala


Shashi Tharoor on AICC general secretary Oommen Chandy’s request to Rahul Gandhi to contest from Kerala: It will be great if Rahul Gandhi contests from Kerala... It will be good to see a PM candidate contest and win seats in both North and South...I want to ask PM Modi if he will ever contest from South, if yes I welcome him to contest against me from Trivandrum...I am sure that we will give a run for his money.

Trouble for Karnataka's coalition politics after sitting MP SP Muddahanumegowda says he will file his nomination as Congress candidate for Tumkuru that has been given to JD(S) as part of seat-sharing deal. While JD(S) supremo HD Deve Gowda is likely to file his nomination from Tumkuru on Monday.

Did the youth get employment, did the farmers receive any help? On one hand Narendra Modi ji lies and on the other hand your Chief Minister keeps on making promises but nothing happens: Rahul Gandhi 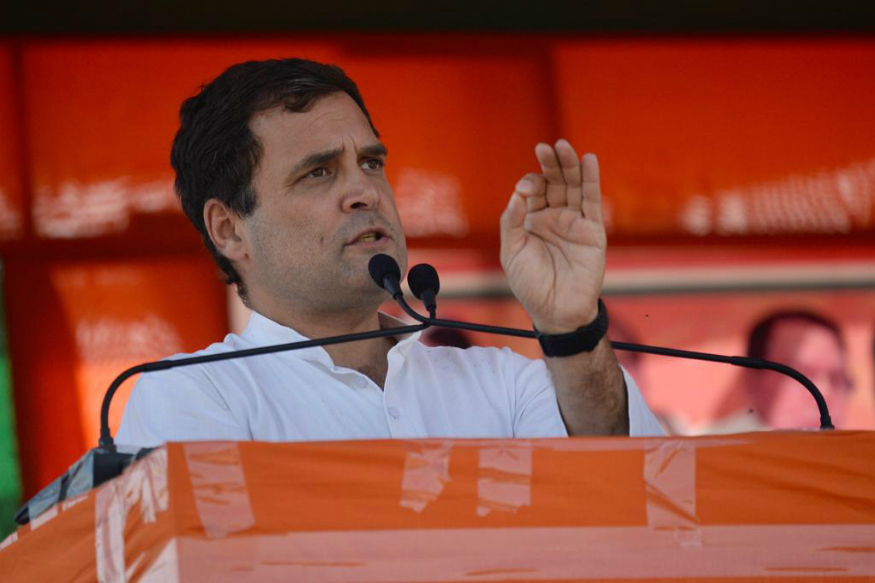 
Union Minister and Rajya Sabha MP Ravi Shankar Prasad asked Congress president Rahul Gandhi to explain how his wealth rose from Rs 55 lakh to Rs 9 crore in five years. Prasad said that Gandhi does not have any known source of income other than the salary of a Member of Parliament.

Attacking Bengal CM months after participating in her 'Opposition Rally', Congress president Rahul Gandhi slammed Mamata Banerjee for "only giving long speeches" and "doing nothing for the state". The remark came despite Mallikarjun Kharge's attendance at the Kolkata rally in January, where the Congress leader read out letters by Gandhi and UPA chairperson Sonia Gandhi "supporting" Banerjee for her "show of unity and hope".

Meanwhile, the BJP has announced third list of 11 candidates for the upcoming Lok Sabha elections, starting April 11. Tainted mining baron Janardhan Reddy has been fielded from Chelvella seat in Telangana.

Congress chief Rahul Gandhi today attacked Narendra Modi’s ‘Main bhi chowkidar’ campaign, saying the Prime Minister only guarded the rich and not the poor. Speaking at a rally in Bihar’s Purnea, Gandhi said he was neither scared of Modi, nor the BJP and RSS and only believed in the truth. Later in the day, Gandhi will kick-off his first rally in Bengal at Kolam Bagan Ground in Malda.

Earlier, BJP chief Amit Shah hit out at the Congress over Sam Pitroda’s remarks regarding the Pulwama attacks, saying the grand old party should answer if it believes that Pakistan has no role in the terror attacks being planned in India. “I demand answers from Rahul Gandhi. Do you think it (surgical strikes) was a routine thing? Losing soldiers was routine? Is the Congress of the belief that any attack on India and its forces not without the blessings of the Pakistan army,” he asked.

Meanwhile, the NDA released its second list of candidates for all the 40 Lok Sabha seats in Bihar today at the state BJP office. The BJP has dropped rebel party leader Shatrughan Sinha and replaced him with Ravi Shankar Prasad in Patna Sahib. Rajiv Pratap Rudy, Giriraj Singh and Radha Mohan Singh were among the other names included in the list.

The Congress and the Nationalist Congress Party along with their allies will hold a press conference for the Mahagathbandhan in Maharashtra at 4 pm. The presser will be attended by party veterans Ashok Chavan, Sharad Pawar, Raju Shetti among others, where in all probability, they will announce their candidates and the alliance formula for the state with 48 Lok sabha seats.