Samajwadi Party turncoat and BJP leader Naresh Agarwal today said that once the results of the Lok Sabha elections are out on May 23, BSP chief Mayawati will break the alliance saying that the Muslims and Dalits have betrayed her. "On the other hands, SP president Akhilesh Yadav will begin running on the roads like a monkey," he said in Hardoi.

Mathura: 76-year-old Fakkad Baba is contesting elections for 17th time even after losing his deposit 16 times. Till now he has contested 8 assembly & 8 Lok Sabha polls.

Mathura: 76-year-old Fakkad Baba is contesting elections for 17th time even after losing his deposit 16 times. Till now he has contested 8 assembly & 8 Lok Sabha polls. He says, "I'm following my guru's order; he told me that I'll succeed in my 20th time". #LokSabhaElections2019 pic.twitter.com/kalleww9y9 H D Deve Gowda insisted that the country did not belong to the people of one faith, but of all those who practised different religions, whether be it Islam, Christianity, Jainism and Hinduism.

Opposition leaders will meet on Sunday at 11.45am in Delhi’s Constitution Club to discuss transparency in elections and EVMs. They will address the media at 12.30 pm.

BJP leader Naresh Agarwal in Hardoi: The counting of votes will take place on May 23. On May 24, Mayawati will say that "main gathbandhan todti hu, 'Musalman' aur 'aheer' ne humko dokha diya". SP chief Akhilesh Yadav will then ‘run like a monkey’. Chennai: While all of India waits to know the results of who will win the Lok Sabha elections, in Tamil Nadu the stakes are higher for all the Dravidian parties as they also face a mini-assembly election of sorts.

Former Prime Minister and JD(S) supremo H D Deve Gowda on Saturday expressed apprehension that a second chance to Prime Minister Narendra Modi would ruin the country and its Constitution.

Biju Janta Dal (BJD) president and Odisha Chief Minister Naveen Patnaik on Saturday said Prime Minister Narendra Modi does not deserve a second term as he has not been successful. "I do not realy think so. No," Patnaik told News18 when asked if Modi deserves another chance as prime minister. "Modi has not been successful. During the last five years, there has been no improvement in unemployment, irrigation and railways." Patnaik, however, described Atal Bihari Vajpayee as one of the best prime ministers India has had.

Congress general secretary for UP East Priyanka Gandhi Vadra’s schedule states that she will attend rallies in Sikri on April 15, Wayanad on April 20-21. Barabanki on April 23, Bundelkhand and Unnao between April 24-26 and Sitapur on April 27.

Former Dholpur legislator Abdul Sagir Khan Saturday resigned from the BJP, blaming Prime Minister Narendra Modi and party chief Amit Shah for the "plight" of the party. "I have not seen such a plight of the party in my 40 years of political career," Khan said. He alleged that Modi and Shah have "hijacked" the party.

Hindustani Awam Morcha (HAM) national vice president and former Bihar minister Mahachandra Prasad Singh, ex-state Congress general secretary Binod Sharma and RLSP chief Upendra Kushwaha’s nephew Vijay Singh Kushwaha on Saturday joined BJP in the presence of senior party leaders. Sushil Modi asserted that "Modi wave" in 2019 elections is much more stronger than what it was in 2014 and claimed that sab aaklan dhare rah jayenge" (all calculations may not have any meaning).

AAP national convener and Delhi chief minister Arvind Kejriwal on Saturday said BJP chief Amit Shah would be Union home minister if the NDA under Prime Minister Narendra Modi is re-elected. He also slammed Shah for a recent comment at a poll rally in West Bengal that the BJP, if re-elected, would remove infiltrators from the country, except those who are Hindu, Buddhist or Sikh.

The decision ended speculation about the candidature of former Union minister Jyotiraidtya Scindia's wife Priyadarshini Raje from their family bastion. AIMIM chief Asaduddin Owaisi on Saturday tore into the Congress, charging it with seeking votes of Muslims by showing them the fear of BJP even though atrocities like Bhagalpur riots and unlocking of the Babri mosque premises had taken place during its rule. Addressing a rally in this Muslim-dominated constituency where his party has put up its own candidate, the firebrand Hyderabad MP said that he had warned people during the 2015 assembly polls not to be fooled by the promises of the so-called Mahagathbandhan. “You did not pay heed and ended up voting for Nitish Kumar who is now sitting in the BJPs lap,” Owaisi said.

Assam Rifles recover cache of explosives in Manipur. The seizure assumes importance in light of intelligence reports that insurgents were trying to create disturbances during elections. 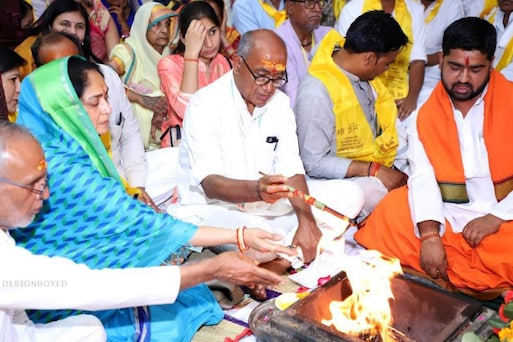 The former Madhya Pradesh CM, who was often accused of minority appeasement by the BJP in the past, has, of late, been seen extensively indulging in religious activities in the company of seers.

Sushma Swaraj: India stood at 142 rank in Ease of Doing Business earlier which improved to 77 rank under Modi government. Our economy was in Fragile five and today it is the sixth largest economy of the world.

Sushma Swaraj: When Uri attack took place, we carried out surgical strike and when Pulwama attack happened, we did air strikes.

PM Modi in Bengaluru South: Congress dreaming about coming to power at the Centre.

PM Modi tells voters to punish Congress and its allies in such a way that they will not be able to even save deposits .

'Cong Will Withdraw Army from J&K'

PM Modi in Bengaluru South: The Congress in their manifesto states that AFSPA will be diluted if they come to power. They intend to make our soldiers helpless through this action. They also plan to withdraw our forces from J&K.

PM Modi in Bengaluru South on "Mission Shakti": Congress says they didn't conduct the test earlier as they wanted to keep it a secret. It was this approach of keeping secrets due to which India lagged behind in technology."Aaj ye himmat Modi ne dikhayi,duniya Bharat ka loha manne laga"

PM Modi in Bengaluru South: When blasts used to take place in the nation, Congress government used to change its Home Minister, and put the entire blame on one person. But Modi doesn't change the Home Minister, Modi changes the ways. 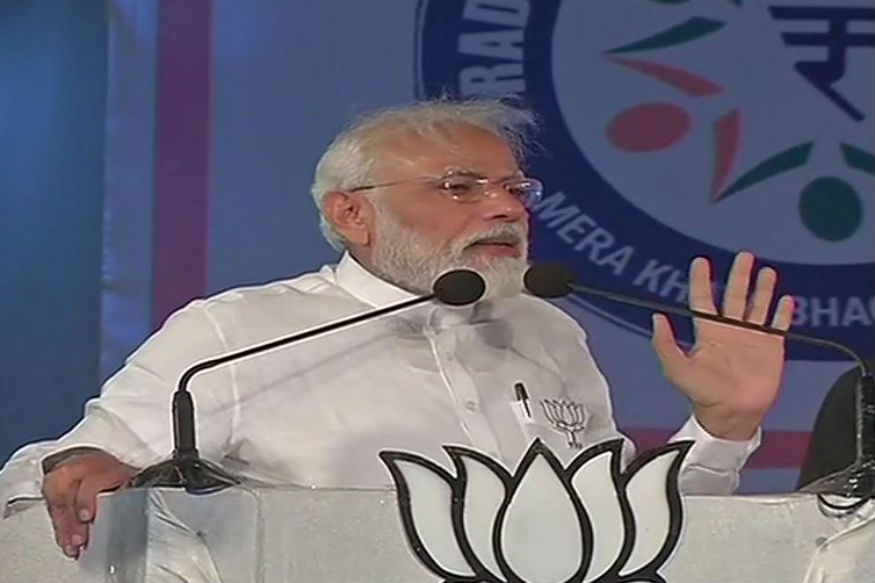 PM Modi in Bengaluru South: You may feel that the Processor of Congress is slow but their Software is corrupt. Their processor slows down when they had to take action in the interest of the country.

PM Modi in Bengaluru South: Now, when the new ‘India’ entered another country and killed terrorists, you felt proud, but the Congress felt bad.

PM Modi in Bengaluru South: When Congress' 'mahamilavati government' was at Centre, didn't blasts occur in Bengaluru? Didn't the nation was living under fear of terror attacks? Did any major blast took place in last 5 years of your "chowkidaar's chowkidaari". It was power of your one vote that made it possible.

PM Modi in Bengaluru South: Earlier, people used to question that if the United States and Israel can enter another country and kill terrorists, what stops India? PM Modi in Bengaluru South: Bengaluru has always given me so much love. I bow to the love of children, youth and elderly.

Attacking Congress in Bengaluru, Prime Minister Narendra Modi blamed former PM Jawahar Lal Nehru for "fire in Kashmir". "After the fire, Congress now talks about taking army out of the region. People of this country will never forgive them," he said.

Speaking about the "BJP-Shiv Sena wave" in Maharashtra, chief minister Devendra Fadnavis said that the alliance has forced Congress's Ashok Chavan to rent people for rallies. "We pay for chairs and stage, but had to get leaders on rent," the CM said, adding that among them are Maharashtra Navnirman Sena workers. "They're bringing leaders from MNS also. MNS was earlier Maharashtra Navnirman Sena. Then MNS became 'Matdar Nasleli Sena' (Matdata Nahi Sena) and now it's UNS, 'Ummidwar Nasleli Sena' (Ummidwar Nahi Sena)," he said.

Addressing a rally in Karnataka's Mangaluru, Prime Minister Narendra Modi said that while he was on his way, he faced a "human wall" and wondered "if so many people are here, will there be any at the ground?" "But same number of people are here as well," he said.

BSP chief Mayawati has virtually ruled out an apology for seeking votes from Muslims at a rally in Saharanpur. She instead raked up Uttar Pradesh Chief Minister Yogi Adityanath’s “Lord Hanuman was a Dalit” remark and accused the BJP of dividing the society along communal lines.

Prime Minister Narendra Modi, meanwhile, has accused the Congress and the Indian Union Muslim League (IUML) of playing a “dangerous game” in Sabarimala, adding that the BJP “won’t let them destroy our culture”. Addressing rallies in Tamil Nadu, Modi said, “When you vote for Congress-DMK and Muslim League, you vote for lower development. A vote for them will mean free hand for terrorists. A vote for them would mean a vote for criminals in politics.”

Andhra Pradesh Chief Minister and TDP supremo Chandrababu Naidu, meanwhile, has approached the Election Commission to complain about the widespread EVM glitches and violence during the first phase of Lok Sabha and Assembly elections in the state on April 11.

Claiming that there is a "silent wave" in the state in his favour, Naidu has accused the Election Commission of making the election process a "big farce." "This is a very big farce. Disaster for the nation. I can say it is a big confusion, big mess, big farce," Naidu had said. He claimed that as per "official information" 4,583 EVMs got stuck in the state and noted that it was a "major crisis."

He found fault with the Deputy Election Commissioner's clarification that there was no problem with the EVMs in AP. "I have never seen such an insensitive, unrealistic, irresponsible and useless Election Commission. Do you make a mockery of democracy? EC turned into BJP branch office," the TDP chief said.

"As senior leader I have to warn them (EC). Country should know. They should not commit any more these type of mistakes," Naidu added.

The TDP chief also said he would file a review petition in the Supreme Court over its order on counting of VVPAT slips. "I am going to Delhi tomorrow (to meet the ECI officials). EC should answer why it did all this. After this we will go logically on EVMs," he said and reiterated the demand that the country revert to the old ballot paper system.

To a question, he replied more rigging was happening now, that too in an easier way with the use of EVMs.

The Chief Minister also fired at the ECI over the appointment of the state Chief Secretary, alleging that the latter was a "co-accused with Jagan" in the disproportionate assets case.

"How do you post the CS without consulting us? Do we have to get work done through him? You will run governments? Will you look after my security," Naidu asked, finding fault with the EC over the transfer of Intelligence DG and three other IPS officers.

The TDP president also cried that the general elections in Andhra Pradesh were scheduled in the first phase in one go only to "leave me no time."

"Last time (2014) elections were held in the last phase, this time in the first phase.

What is the rationality? Did you speak to political parties or have you taken lottery or did jumbling? What it indicates?" he asked.

Naidu, however, wound up his press conference announcing that he would take oath (as Chief Minister again) on a "good day" after May 23.

"There is a silent wave, beyond anyone's imagination. We are winning," he added.